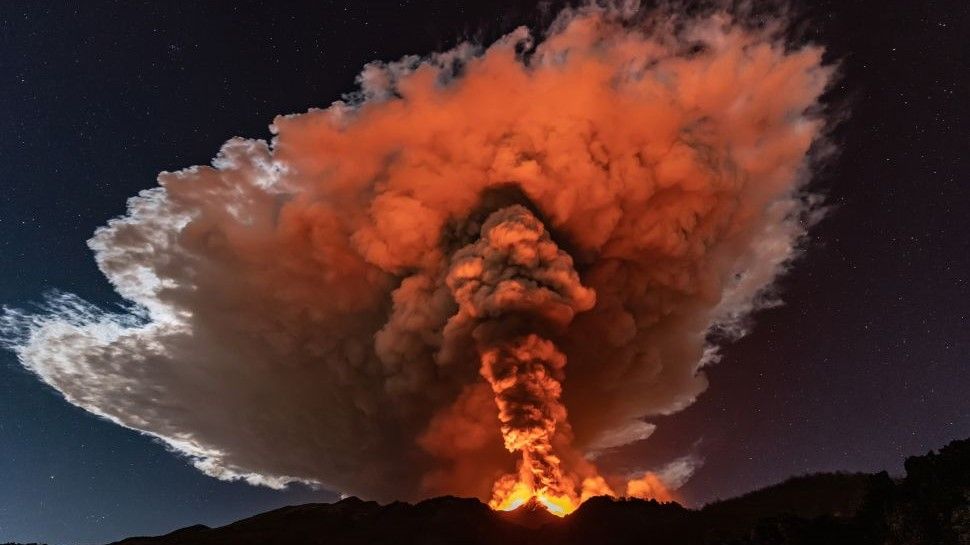 Volcanoes are one of the most extreme examples of Earth’s raw power, eliciting fear and wonder at the same time. Every year, we are surprised by the ferocity, uniqueness and unpredictability of volcanoes, and 2021 was no different. Here are 10 times volcanoes blew our minds in 2021.

Mount Etna is the most active volcano in Europe, so it’s not surprising that it erupted again in 2021. But when it blew its top in February, photographers caught some stunning images of lava spewing from the summit.

In one particularly impressive image (shown above), oozing tendrils of magma spread across the night sky behind a church. This clever image is an example of forced perspective: The church is actually more than 15 miles (25 kilometers) from the volcano crater, but it looks as if the luminous lava were merely hundreds of feet in the background.

Luckily, there were no injuries or serious damage during the eruption. Mount Etna has continued to be unusually active this year and has erupted at least 50 times since February, according to Live Science’s sister site Space.com.

In March, Fagradalsfjall volcano in Iceland, about 25 miles (40 kms) southwest of Reykjavik, spectacularly erupted for the first time in more than 900 years, and volcano enthusiasts flocked to the site, including one daring visitor who flew a drone directly into the fiery cone.

In a short video captured by the drone, the pilot follows a lazy river of bright-orange magma before making a daring dive through bubbling lava cauldron at the summit of a small cone.

The eruption was preceded by a swarm of more than 20,000 earthquakes, Live Science reported at the time. However, as with most eruptions in Iceland, local people faced limited risk because it was an effusive eruption, in which lava seeps out of the ground at a steady rate rather than building up and exploding outward.

In September, Kilauea volcano on Hawaii’s Big Island began erupting from the Halema’uma’u crater, a small vent near the much larger Kilauea caldera. Several pilots flying aircraft near the eruption reported seeing a rare type of volcanic glass known as Pele’s hair.

Pele’s hair consists of golden, sharp strands of glass that form when gas bubbles within lava burst at the surface. The rare phenomenon is named after Pele, the Hawaiian goddess of fire and volcanoes.

“The skin of the bursting bubbles flies out, and some of the skin becomes stretched into these very long threads, sometime[s] as long as a couple of feet [more than half a meter] or so,” Don Swanson, a research geologist at the Hawaiian Volcano Observatory, previously told Live Science.

The eruption at Kilauea was preceded by a swarm of more than 140 earthquakes in just 12 hours in August, Live Science reported at the time.

One of the biggest volcano stories of 2021 was the September eruption of La Cumbre Vieja volcano in La Palma, one of the Spanish Canary Islands. The activity grabbed headlines at the time because of a long-standing theory that an eruption on La Palma could cause a “mega-tsunami” that could impact the eastern coastline of the U.S., but experts quickly shut down that idea.

The eruption spewed magma into the surrounding region, destroying around 2,000 buildings and forcing the evacuation of more than 7,000 people, although there were no serious injuries or fatalities, according to the BBC. The La Palma eruption finally ended Dec. 13, after three months of continuous activity.

During that time, the volcano belched stunning lava flows that were captured from space, and one Spanish politician suggested bombing the volcano was the only viable way to stop the eruption. (In the past dynamite has been used to divert lava flows, but scientists say an explotion would not stop the eruption)

The bull’s-eye clouds were a combination of the volcano’s eruption plume — a mixture of ash, smoke, water vapor and other volcanic gases — and a rare atmospheric disturbance known as a temperature inversion. This condition occurs when a temporary layer of hot air forms in the lower atmosphere, which traps the eruption plume from the volcano, forcing it outward. The cloud rings form because of natural pulses of intensity during volcanic activity.

The official name for this type of concentric cloud formation is a gravity wave. However, the formation has nothing to do with gravity and is completely separate from the ripples in space-time called gravitational waves.

In May, Mount Nyiragongo in the Democratic Republic of the Congo erupted, sending thousands of people fleeing across the border into Rwanda and filling the skies with orange-red smoke.

The last time this volcano erupted, in January 2002, lava covered the nearby city of Goma and left up to 250 people dead and more than 100,000 without homes. In 1977, the volcano also blew its top, sending lava across Goma and killing 2,000 people.

In the most recent eruption, however, the lava flow stopped just short of Goma, and no one was injured. Despite being one of the most active volcanoes in the world, Mount Nyiragongo is no longer properly monitored; the World Bank cut funding to the Goma Volcano Observatory because of corruption allegations.

In August, three volcanoes in Alaska’s Aleutian Islands — Pavlof, Great Sitkin and Semisopochnoi — began erupting simultaneously. The eruptions were not close to human populations and posed no risk to people.

Such a triple whammy is rare, but it’s not unheard of. “Alaska has a lot of volcanoes, and we typically see maybe one eruption every year, on average,” Matthew Loewen, a research geologist with the Alaska Volcano Observatory, told NBC News. “To have three erupting at once is less common, but it does happen.”

The volcanoes are part of the so-called Aleutian Arc, a chain of volcanoes that sits on the boundary between two tectonic plates. The last time three volcanoes erupted simultaneously in Alaska was around seven years ago, according to Loewen.

In February, a rare “ice volcano” emerged in southeastern Kazakhstan. Instead of spewing lava and ash, however, this icy cone, which is not actually a volcano, spit out a light snow spray.

The ice volcano erupts with steam that freezes into tiny ice crystals as it leaves the structure. The buildup of frozen crystals allowed the structure to reach an impressive height of 45 feet (13.7 m). Visitors flocked to the ice pillar to take photos with the rare formation.

The term “ice volcano” is usually given to similar ice structures that can appear around the edges of large bodies of water, such as lakes, Live Science previously reported, but this version formed directly above a hot spring instead.

Skyscraper-size volcano on the seafloor

In August, scientists revealed a 2,690-foot-tall (820 m) underwater volcano in the western Indian Ocean, off Madagascar. The volcano, which is about 1.5 times the height of New York’s One World Trade Center, was birthed after the largest active underwater eruption ever recorded.

The eruption, which occurred in 2018, followed a puzzling spate of earthquakes that struck near what is normally a seismically quiet area. Between May 2018 and May 2021, more than 11,000 detectable earthquakes shook the area. For context, only two earthquakes have been detected in the region since 1972.

The newly formed skyscraper-size volcano also sits on the deepest volcanic magma reservoir known to scientists, which extends about 34 miles (55 km) underground. Researchers also suspect similar eruptions have happened in the area in the past.

In July, researchers exploring the Indian Ocean discovered the remains of a collapsed underwater volcano with an uncanny resemblance to the all-seeing “Eye of Sauron” from J.R.R. Tolkien’s famous fantasy series “The Lord of the Rings.”

The eye is actually an oval-shaped depression measuring 3.9 miles (6.2 km) long by 3 miles (4.8 km) wide. Called a caldera, this giant divot is left over from the ancient collapse of a deep-sea volcano. The caldera is surrounded by a 984-foot-tall (300 m) rim, giving the impression of eyelids, and an equally tall cone-shaped peak at the center, which looks like a pupil.

The researchers suspect that the volcano remnant is around 100 million years old. They also discovered two seamounts (underwater mountains) nearby, which they named after famous places from the evil realm of Mordor in Middle-earth.