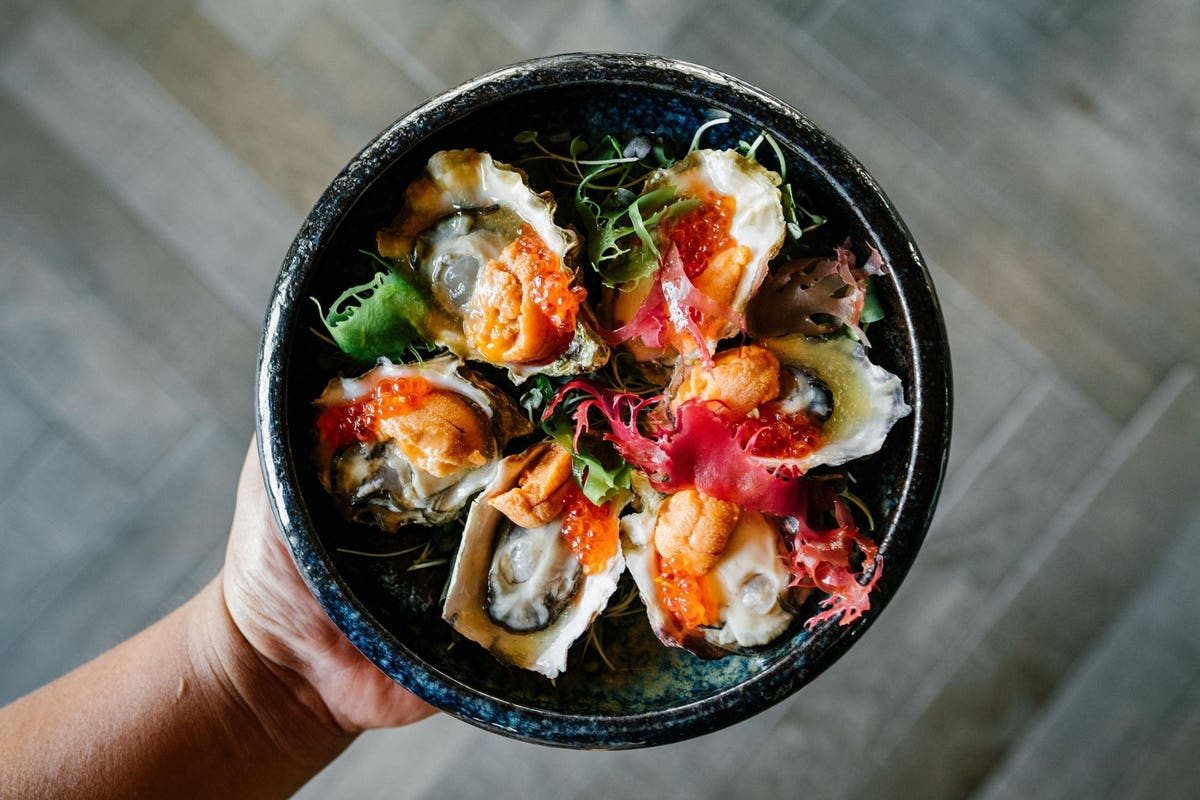 As the summer heat (hopefully) starts to ebb in New York leading to milder temperatures in early fall, it makes sense to get out of the air conditioning and go up on the roof. There are various options for cocktails and socializing scattered around New York, many with skyscraper views. These two also provide meals worth a trip for on their own.

The rooftop at Gansevoort Meatpacking NYC recently upgraded its food service as part of a hotel renovation overall. The rooftop pool with its skyline views was always the main talking point here in competition with Soho House’s rooftop pool across the street. Now with the arrival of Saishin By Kissaki, an extended omakase and kaiseki popup from the sushi specialist restaurant group set to stay in place until early 2022 (enclosed when the weather gets colder), a serious dinner can now take place apart from the light bites and burgers available poolside.

The Kissaki group, which numbers two other restaurants in New York, one in Greenwich, Connecticut and another in Water Mill in the Hamptons, is known for the freshness of its fish, much of it sourced directly from Japan. Selections are offered in 12 and 15 course omakase menus decided on a daily basis by the chef. A la carte selections include Kumamoto oysters, Madai ceviche and individual pieces of nigiri or sashimi in creative combinations such as bluefin tuna with summer truffle, yellowtail with cilantro and pico de gallo and the silver skinned fish hikarimono with green apple and goma, the Japanese vegetables in sesame sauce.

Over in Chelsea, Gallow Green, the rooftop of the McKittrick Hotel, the home of imaginative performance presentations such as the award winning immersive interpretation of Macbeth Sleep No More (reopening October 4th), emerges annually in warmer weather before transforming in winter into the enclosed cozy ski cabin “The Lodge at Gallow Green.” Given the correspondingly theatrical setting—wooden paths through a dense forest of overgrown plants, flowers and vines accented with strings of twinkling lights plus what looks like an abandoned railway car, it’s always surprising how good the food actually is.

Pedigreed French chef Pascal Le Seac’h turns out sophisticated starters such as the vegetable salad Fattoush composed of cucumbers, tomatoes, radishes, scallions, chickpeas and snow peas with fresh mint and yogurt dressing and sashimi grade yellowfin tuna with avocado, lemon zest, sesame, cilantro, Espelette pepper and olive oil. Lighter eaters can opt for a grilled organic salmon salad and solid versions of a New England lobster roll or a Vietnamese pork belly banh mi composed of maple and soy glazed braised pork belly, sliced cucumber and watermelon radish, picked daikon, carrot and fried shallots. Beef fanciers can opt for the house burger, a blend of brisket and hanger steak with bacon marmalade or a Black Angus flat iron steak served with a trio of sauces. And the cocktails also veer toward the theatrical such as the Sleep No More, a mix of vodka, elderflower, butterfly pea flowers, citrus and cider. Undoubtedly the creative cocktails in combination with lively music, fuel the energy level that increases as the night goes on.