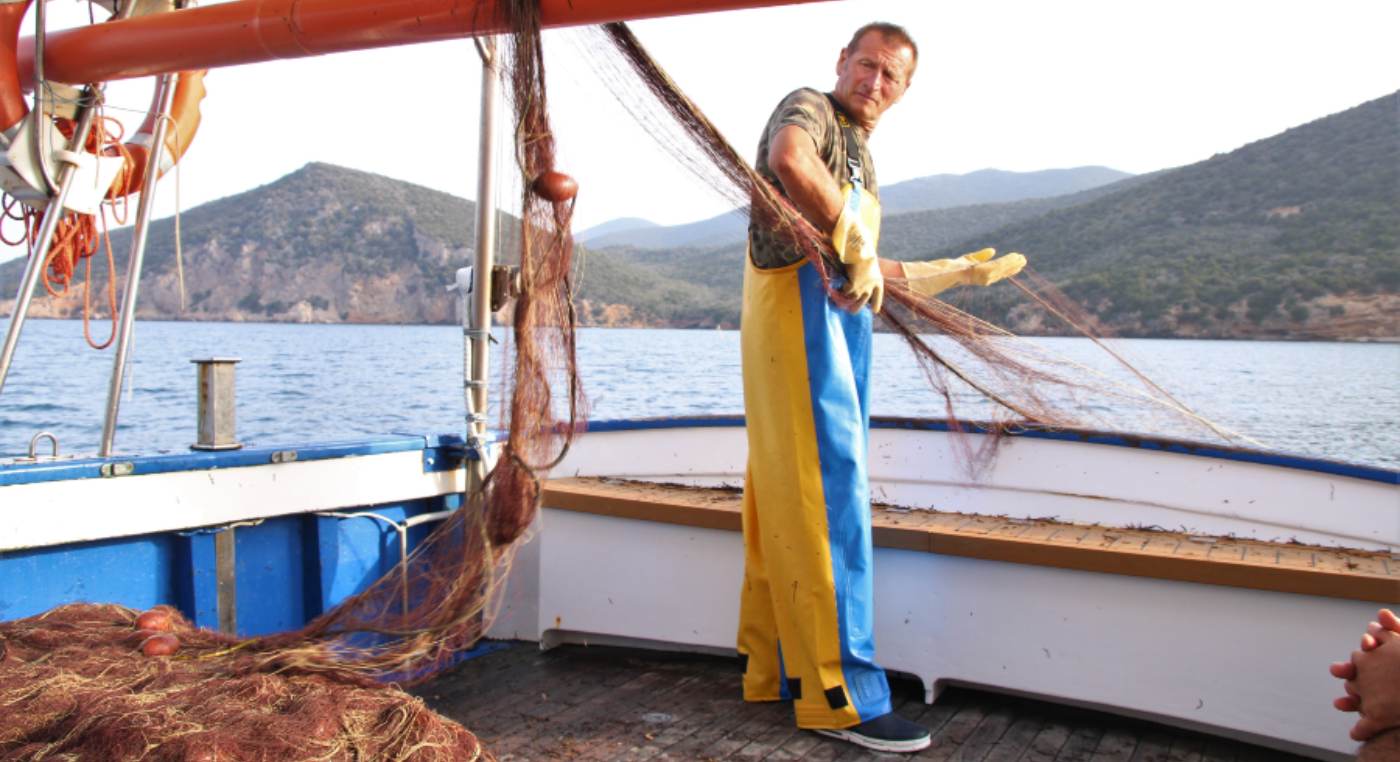 When Paolo Fanciulli dropped 39 large marble sculptures down to the bottom of the sea off of Tuscany’s Maremma Regional Park, it was not his first strike in the battle against unsustainable fishing, but it was his first step into the art world.

A fascinating story, at the heart of which is a fascinating and charismatic figure, recounts the confluence of an ancient relationship between man and nature, and a celebration of the Mediterranean Sea as a cradle of civilization.

Sixty-year-old Fanciulli practices sustainable fishing and “pescaturismo” or fishing-tourism at his home in the village of Talamone.

He still wakes up at dawn before heading out into the clear waters off the coast of Tuscany’s Grosseto province. He and his colleague Francesco fish, as their ancient ancestors did, by casting shallow nets that take mullet and bream while leaving the bottom reaches undisturbed.

Fanciulli’s “war” against illegal or unsustainable methods of fishing is long documented, and has appeared in newspapers around the globe.

From 2002 to 2006, he gathered the help of the Tuscan government and WWF-Italia to deploy a strategic formation of 126 underwater cement bollards to ruin any of the deep sea trawling nets he saw were rapidly destroying the fish stocks he grew up harvesting.

The nets would tear up the delicate seabed ecosystem, including seagrass meadows, and simply decapitate the marine food web. But Fanciulli knew the nets were extremely expensive to replace, and the relatively-inexpensive bollards, costing about €560 to make and transport, would last a lot longer than the poachers would.

That work took him twenty years to complete, recount the authors of his biography The House of the Fish.

His next project would be similar, but also quite different. It would expand the protection of his beloved Mediterranean, while enlisting some of the greatest marble sculptors on Earth to bring the world’s attention to the greater problem of general environmental degradation.

The House of the Fish

“The importance of the project is that we need some sensible consumption of resources,” Fanciulli told GNN. “However the illegal industry is devastating everything, and with this project we can send a message to the whole world to give back; not only to take.”

“But the intent of mine is also to think of the future; a better future, with more sustainable fishing, and a greater respect for the environment,” he said.

Paolo Fanciulli, is, as he told me when I went out on a tour with him and Francesco, a fisherman, not a super-savvy marketer or social media manager.

So with the help of a childhood friend who had become a successful engineer, Fanciulli imagined a series of large marble sculptures, taken from the Carrara Quarry, the fount of so much of the marble which Michelangelo used to create his artworks.

While Fanciulli asked for two—after a meeting with the President of Grosseto region of Tuscany and Ippolito Turco, the president of an association that now looks after the sculptures—he received 100.

MORE: Historian Believes the Holy Grail and Lost Ark of the Covenant May be Hidden Under This House in English Countryside

But who would sculpt them? He needed to find generous and far-sighted sculptors who would put their creativity at the service of the sea, and enough funding to transport the 10-20 ton blocks from the north of Tuscany to the south.

Arriving at the house of an artist named Massimo Catalani, who lived in Rome and worked at the famous Federici Palace, Paolo, who brought his morning’s catch in a large pot to cook for dinner, was connected with scores of people from the world of art and architecture, one of whom was Emily Young, considered Britain’s best living sculptor.

Young was among a dozen international and Italian sculptors who donated their time and effort to contribute to a project that would not be seen in traditional museums, but that would slowly become covered in seaweed, and seen only by divers as they sit sentinel-like, defending the life of the depths.

In May 2015, the first 20 stone blocks, each costing thousands simply to transport to the pier of Talamone, were loaded onto a barge and floated out to their final resting place. A second group of 19 were lowered down last summer.

Ippolito Turco told The Independent, “We’ve managed to totally stop the illegal fishing in the area. Now we’re looking at extending the project along the coast to the north. We want to put more sculptures on the seafloor. It has proved to be very effective.”

“What you want to happen is that in time, you won’t know they are sculptures,” said Ms. Young. “They will be so covered in seaweed and algae that they will look like a coral reef or the remains of a wreck.”

LOOK: Seniors Play Dress Up With Nature to Personify the Magic Around Us– LOOK

Young added that she likes to hope one day they will be found by marine archaeologists, and hypothesized as being part of an ancient civilization.

Looking to the future

61 blocks of greyish marble remain in Turco and Fanciulli’s possession, waiting for world-renowned sculptors to carve them into statues.

For those familiar with the 17 contrade or guilds of Siena, one sculptor plans to make one of every animal-symbol on the guilds’ coats of arms, something bound to attract major investment from the uber-patriotic city, while Paolo also wants to work with the Grosseto Cultural Office to install underwater lighting amid the sculptures to light them up for a few hours at night time.

“If there are artists that want to come to the House of the Fish, we are available, because the more artists we have the stronger the project,” Fanciulli told GNN. “I think if famous artists come here, there’s a bigger impact. If there are artists reading this, our sea has need of your talents.”

The La Casa dei Pesci website is one big fundraiser, where people can contribute in all sorts of ways to the project. Artists looking to carve a block will post their idea as a fundraiser, and anyone who contributes gets gifts in return, such as dinner and a fishing trip with Paolo, paintings, and more.

SHARE the Sustainable News From the Deep Blue With Friends…