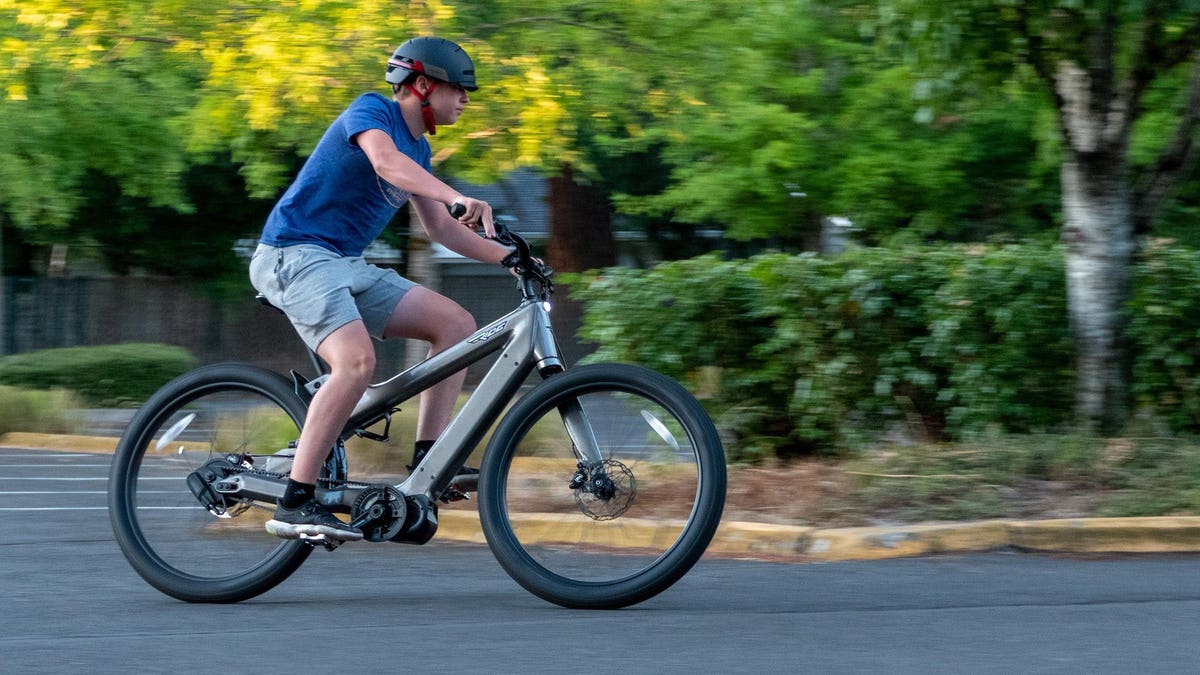 Late last year, I journeyed south from Portland to meet up with pioneering mountain bike designer Tony Ellsworth, who had just launched an ebike company called The Ride. His first bike, the Radiant Carbon, was just getting into production after a successful crowdfunding campaign, despite the ongoing pandemic. I met up with Tony in a small Oregon coastal town to take a short spin on both pre and current production Radiant Carbon examples, and it made quite an impression. But, my ride time was severely limited (just over an hour) so we agreed that at some point, I’d get another for a bit longer spell to test it out in real-world scenarios.

Then a few weeks ago, a friend and former co-worker, Kent Lewis, now President of Anvil Media, a digital marketing agency based in Portland, posted on social media that he had purchased a Radiant Carbon in Obsidian Metallic. Might he let his old workmate put his shiny new $6,995 ebike to the test? He said he… might. Tony and Kent are friends and Tony had signed the bike, so it took some libations, personal guarantees and cajoling for Kent to release it to me, but he finally relented.

Given much more time to put the Radiant Carbon to some real-world tests including commuting, joyriding, hill climbing and more, I’m happy to bring you this much more in-depth review of this unique electric bicycle.

There is a lot going on techwise with the 52-pound Radiant Carbon. First off is the frame. It’s an asymmetrical design that is essentially a complex single carbon fiber triangle with no center support. The seatpost rides in a small sub-frame and the rear wheel is held where the triangle meets at the back, but it almost appears to be single-sided, although it isn’t. The fork, on the other hand, is truly single-sided. The Carbon does not feature any suspension systems.

A 500-Watt Shimano E6100 mid-drive motor with 60Nm of torque supplies power and draws juice from a 630Watt-hour battery that’s inside the frame, but it’s also replaceable and recharges in three hours. Ellsworth claims the battery gives the bike about 100 miles of pedal-assisted range. Full internal cabling cleans up the look and even the bright LED headlight and tail light are integrated into the frame. The Radiant Carbon is sleek, sci-fi cool, and very cleanly designed. It looks like it came from a cleaner, smarter future. There’s not even a vestigial kickstand to mar the clean lines, it’s been cleverly integrated into the left side pedal.

A Shimano ride computer sits up top and connects to your phone via Bluetooth, and out back, a fully automatic NuVinci Optimized Enviolo hub automatically changes the gearing for you depending on pedal effort, incline, assist level and other factors. It’s a Class I ebike, so really all you have to do is pick from three levels of assist on a right bar pod… and pedal. There is no thumb throttle for freewheeling. There’s also no chain to oil and maintain. A Gates carbon belt drive transfers power from front to back and should last the life of the bike. Many ebikes have disc brakes, but very few have 4-piston Magura hydraulic binders that give high-level progressive and authoritative stopping power. Fat Schwalbe 27.5-inch Super Moto tires put down large contact patches. The FSS Performance saddle is very comfortable. No shortcuts were taken on making this ebike.

Ellsworth has positioned the Radiant Carbon as a luxury ebike and buyers should expect all the goodies, but the Carbon may surprise some in its ease of operation. As I noted in my previous review, the standout feature of the Radiant Carbon is how automatic – and comfortable – it is.

I put it to work riding back and forth to my day job, which involves some mild inclines and downhills. Riders pick from three assist levels using buttons on the right bar, and then it’s time to pedal. Choose a lot of assist and it’s easy and fast, and adjusts gearing to speed and effort. The bike is in always in low gear when you start pedaling from a stop, and seamlessly increases the gear ratio as you pick up speed. Effort, essentially, doesn’t change much. It’s a very unusual experience at first but you get used to it in a hurry. There are no twist grips to change the rear hub gearing or anything like that. Just… pedal.

The riding posture and experience is reminiscent of a beach cruiser as the bars bend up and back a bit, but the overall seating position is neutral and if you really want to stand on the pedals for some reason, you certainly can with complete control of the bike. But for the most part, sitting on the comfortable seat and pedaling with moderate to light effort results in plenty of speed. The pedal assist signs off at the Class I 20 miles per hour speed limit and really, if you want to go any faster, there are other bikes out there that can do that, but 20 nits is a good clip on any bicycle. Speaking of faster, I pointed the Carbon up a local tall butte near my home and set the assist to maximum, and the 500-watt motor powered right up the hill as I sat and pedaled. Coming back down, the speedometer registered speeds approaching 40mph before I laid into the excellent brakes to scrub off velocity as a corner approached. The Carbon rode like it was on proverbial rails, with no drama.

I rode the Carbon to work, the gym and even across Portland to visit friends and enjoyed the rides, even at night, with the small LED headlight throwing an unexpectedly bright pool of light onto the pavement or pathway ahead of me. The fat Schwalbe tires, run at about 25 psi, deliver a smooth, quiet ride and soak up small bumps. While there is no suspension, I did not hesitate to pop the bike off a few curbs while standing on the pedals and the landings were both controlled and with no chain to slap around, eerily quiet. While some bike makers automatically put front suspension on their ebikes, I often lock it out (if that’s an option) as I feel a fully “hard tail” type of ride gives more control in an urban ride environment where precision is more important. I did ride the Carbon on some dirt paths through a local park and it tracked just fine, especially given the fat tires, so riders don’t need to worry about avoiding gravel stretches or the occasional stretch of unpaved pathways. Remember, the first mountain bikes didn’t have suspension either.

More time aboard the Tony Ellsworth’s creation confirmed my suspicions from my short ride almost a year ago: The Radiant Carbon is an innovative and distinctive offering in the ebike world. The design is unique and the performance capabilities make it a good choice for anyone looking for a solid bike for the long haul. The long-distance assist capabilities make it a great choice for commuters looking to leave their car at home and not having to worry about finding an outlet at work to charge it up. If simplicity and stunning design are high on your list of ebike attributes, the Radiant Carbon is your bike.

I enjoyed my time on it and my friend and the bike’s owner, Kent Lewis, also understands how an ebike can change up your transportation dynamic – even for a guy who was already commuting on a regular bicycle. “I enjoyed commuting on my cross bike for the past decade, but The Ride gets me to my office and meetings around town quickly and without breaking a sweat,” Lewis told Forbes.com. “The bonus of this particular ebike is that it looks good and is enjoyable to ride. I rarely use my commuter bike anymore.”

Nits? Not many. It’s expensive, but Tony Ellsworth told me several times he doesn’t build bikes to meet a budget, the builds them to meet a need, fulfill a vision and to last a long time. Quality bikes are a worthy investment. Also, by using gear from established makers like NuVinci, Shimano and Magura, owners and most any shop can more easily fix problems. If anything, I’d love to see some sort of rack system for the Carbon; I wore my messenger bag while commuting and that certainly works, but more carrying capacity would be nice. It’ll be a challenge to make a rack work given the unusual frame design, but I’m sure Ellsworth can create a solution.

If you’d like to try out a Radiant Carbon before buying, it is possible to rent them in Newport Beach, California.

Radiant Carbon ebike by The Ride: MSRP and as tested: $6,995