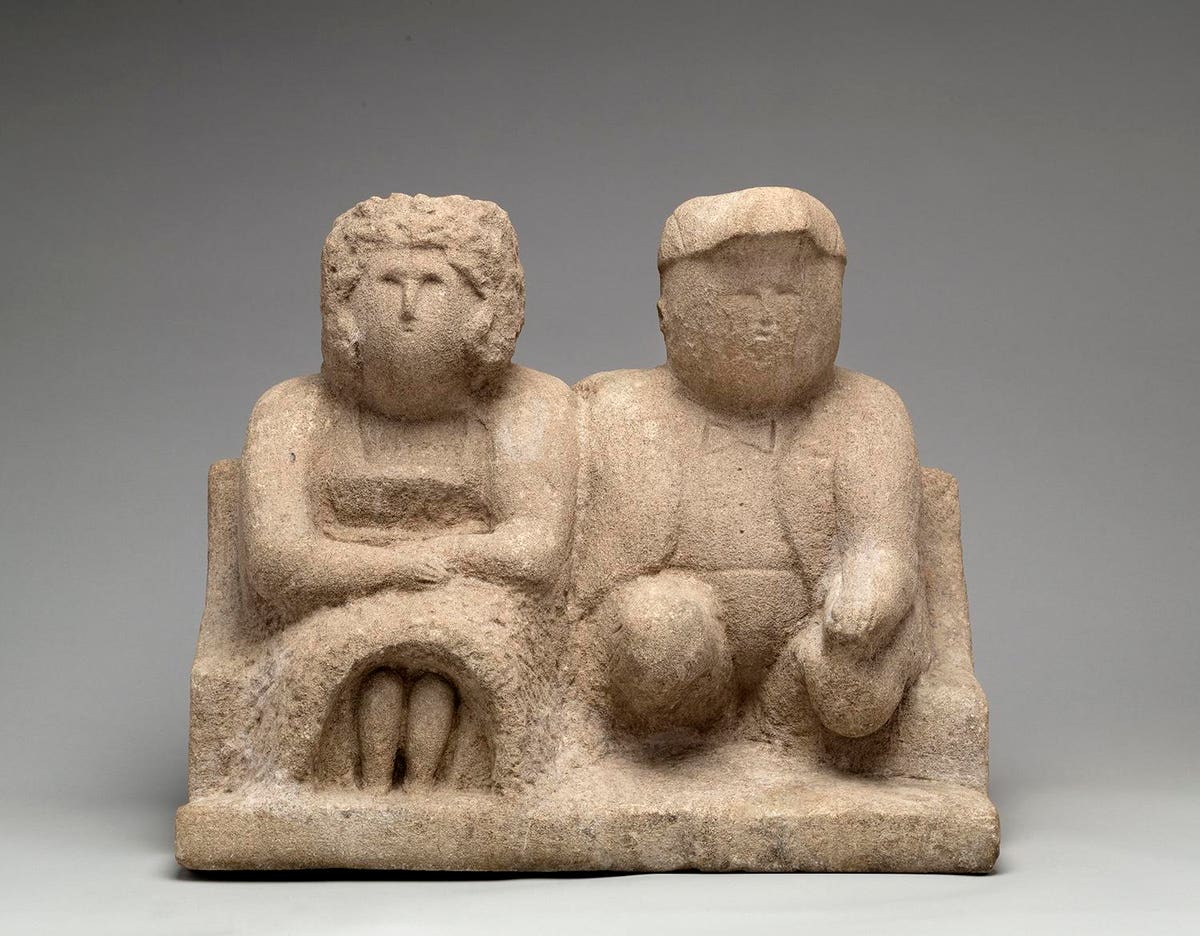 The story of William Edmondson could scarcely be believed if it weren’t true. He was born in Nashville, Tennessee sometime in the early 1880s to parents who were previously enslaved. The exact date of his birth is unknown due to the family Bible in which that information had been recorded being burned in a fire.

At roughly 50-years-old, having retired as a laborer with zero artistic background, he received a vision believing, “Jesus has planted the seed of carving in me” (“Time” magazine, November 1, 1937). In the vision, God ordered him to obtain mallet and chisels. He underwent a religious conversion devoting the rest of his life to preaching and cutting tombstones at God’s will.

Poor and Black in the Jim Crow South and lacking any formal education, Edmondson took advantage of a pile of limestone that had been mistakenly dumped on his property–“a gift from heaven” he believed–for his initial carving material. Makeshift tools including railroad spikes and sledgehammers served as carving implements.

Edmonson began by making tombstones, often for the city’s African American community. He would advance to rudimentary figures, generally one to three feet in height. These he displayed in his yard, drawing attention from intellectuals at nearby Vanderbilt University.

In 1936, Louise Dahl-Wolfe, a photographer from New York for “Harper’s Bazaar” magazine in Nashville visiting friends saw his sculptures–his “mirkels” (miracles) as he called them–and photographed them. Back in New York, she showed the pictures to Alfred Barr, the influential first director at the Museum of Modern Art; he was so taken by the carvings that he arranged a solo exhibition at MoMA for Edmondson in 1937, making him the first Black artist–and first self-taught artist–to receive a solo show there. Edmondson didn’t visit, aside from a short trip to Memphis, he never left Nashville.

He died on February 8, 1951, following a years-long battle with cancer. The famed tombstone carver was buried in an unmarked grave in a cemetery on the outskirts of town. Another fire destroyed the cemetery records detailing which plot was his.

Edmondson returns to the spotlight in Nashville as “The Sculpture of William Edmondson: Tombstones, Garden Ornaments, and Stonework,” the first large-scale museum examination of the artist’s career in over twenty years, receives simultaneous presentation at Cheekwood Estate and Gardens and the Fisk University Galleries through October 31.

“It was important to me that the exhibition enabled increased access to Cheekwood’s tremendous collection of Edmondson and Edmondson-related works, and part of that was literal physical access. The Fisk University Art Galleries are more centrally located (in Nashville) and do not charge any admission fees,” Cheekwood Curator-at-Large Marin Sullivan told Forbes.com of the partnership. “Seven limestone carvings and six Louise-Dahl Wolfe photographs are installed at Fisk, and one sculpture, Critter, from the Cheekwood permanent collection, will remain at Fisk following the closing of the exhibition on long-term loan.”

Photographs of Edmondson’s sculptures fail to represent their intricacy. What appear as roughly hewn stone globs in two dimensions come alive in three.

“In seeing the works in the exhibition together and in person, I was profoundly struck by just how much detail his work actually has! While seemingly simple in form, every single carving demonstrates a unique deployment of techniques to convey subject matter,” Sullivan explains. “There are rough surfaces made to resemble different textiles like lace or various animal furs. There are bows and pocketbooks and little feet peeking out from the hems of skirts. Even in carvings of similar subjects, whether preachers, brides, or eagles, each of his carvings has its own unique presence and character—and rewards close looking!”

Displayed at both locations along with Edmondson’s carvings are a variety of photographs of the artist helping bring his story to life. Three major photographers visited Edmondson at his home: Edward Weston in 1941, Consuelo Kanaga in 1950 and Dahl-Wolfe on multiple occasions in the late 1930s and early 1940s. The resulting photographs of have become fundamental to the broader understanding and appreciation of his process and his work. The majority of photographs included in the exhibition at Cheekwood and Fisk are by Dahl-Wolfe who donated a large quantity of those she took of Edmondson and his work to Cheekwood.

Without these photos, it’s not difficult to imagine how more of Edmondson’s remarkable story–like his birth date and gravesite–might also have been lost to history.

Similarly, Edmondson’s home at 1434 14th Ave South no longer stands. It is now a park space, Edgehill Community Memorial Garden. A historical marker can be found there and a local nonprofit, Save the William Edmondson Homesite Park & Gardens, is working to preserve and better contextualize the location. A park named in his honor can be found roughly a mile from his homesite near downtown.

A number of his tombstones do remain in situ in cemeteries across town, but they, like the artist more generally, exist well outside this now bustling, sprawling, cosmopolitan city’s contemporary memory. Cheekwood and Fisk, thankfully, haven’t forgotten.

Neither have collectors. In 2016, one of his sculptures depicting a boxer sold for $785,000 at Christie’s auction house.

The artwork of another groundbreaking African American artist can be seen presently in Nashville as the Frist Art Museum presents “Kara Walker: Cut to the Quick, From the Collections of Jordan D. Schnitzer and His Family Foundation” through October 10. Walker (b. 1969) is one of the most significant contemporary artists working today and has been for a generation.

Offering a broad overview of the artist’s career which provocatively explores racial and gender exploitation, abuse and inequity, “Cut to the Quick” displays more than 80 works across a variety of mediums including her now iconic cutouts, as well as a bronze replica of Fons Americanus, the 43-foot-tall allegorical monument installed in Tate Modern’s (London) Turbine Hall in 2019.