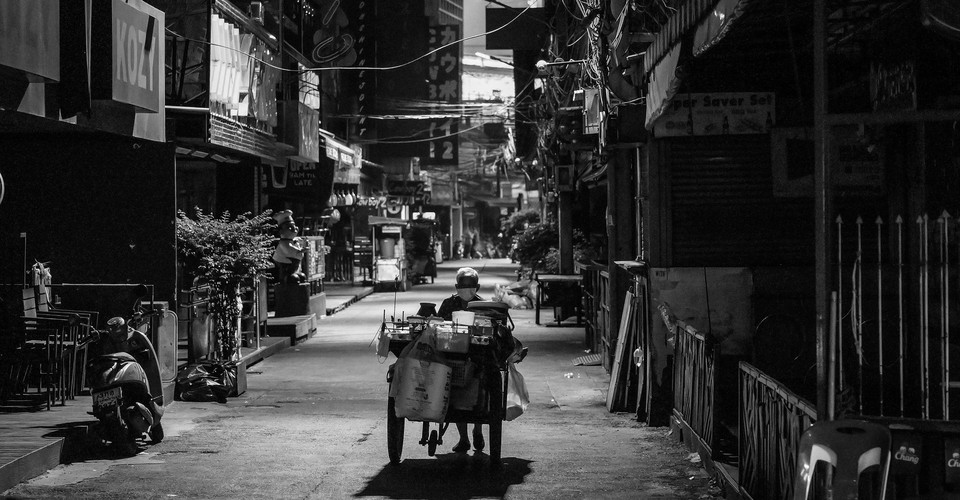 Shortly after Jarrett Wrisley arrived in Bangkok in 2008, the global financial crisis hit the media industry, forcing outlets to slash budgets. Wrisley, a food and travel journalist, saw his opportunities to write rapidly diminishing, so he pivoted to the only other thing he knew how to do: cooking. In September 2010, Wrisley opened Soul Food Mahanakorn, serving northern and northeastern Thai fare in the capital’s trendy Thonglor neighborhood. The restaurant helped Bangkok, always renowned for its street food, establish itself as a buzzy high-end-dining challenger to more established regional food destinations such as Hong Kong and Singapore. Sporadic upheaval—including a coup, riots, and occasional floods—did not stymie the seemingly endless stream of visitors to the country: In 2019, Thailand welcomed about 40 million foreign tourists.

But on January 13, 2020, a traveler from Wuhan who was visiting Thailand tested positive for COVID-19, marking the first confirmed case outside of China. Bangkok’s restaurants, sensing that the disease could be a major event for the industry, complied with restrictions, expecting to reemerge in a few months, Wrisley told me. But as months dragged on, he said, messaging from the government “became very, very confused.” There were lockdowns, haphazard alcohol bans, and scant support delivered to the industry, leaving restaurant owners to largely fend for themselves. This summer, Wrisley, a former Atlantic contributor, closed Soul Food Mahanakorn for good. “My wife and I put everything into our business, so to leave our staff that have been with us for a decade, to close the doors for the last time,” he said, “I’ll never forget that feeling.”

Since the 1997 Asian financial crisis, which wrecked several of Southeast Asia’s economies, development and growth in the region has, if haltingly and unevenly, been robust. Those who are bullish on the region have a well-rehearsed sales pitch: The countries that make up the Association of Southeast Asian Nations, a regional bloc, have an enormous combined population (some 650 million people) and an eye-popping cumulative gross domestic product ($2.8 trillion). Mentions of residents’ young average age and name drops of one of Indonesia’s tech unicorns have, in recent years, updated the talking points for the more online age.

Former President Barack Obama, though he could never fully pivot the United States to Asia as he envisioned, was a frequent visitor to the region, often recounting his youth in Indonesia. After Southeast Asia was largely ignored by the Trump administration, President Joe Biden has begun to pay more attention to it: Vice President Kamala Harris began a visit to Singapore and Vietnam this weekend. Those who have long called for the U.S. to engage the region hope that after America’s unceremonious extraction from Afghanistan, this goal may finally be realized.

Yet if that does happen, the narrative advocates can present about this part of the world is no longer so rosy. A region that was on such an apparently unremitting upward trajectory has seen its prospects for progress badly damaged by the coronavirus.

In the early stages of the pandemic last year, many countries across Southeast Asia tallied enviable success, avoiding large-scale outbreaks and mass death. But the arrival of the far more transmissible Delta variant this summer and a lack of vaccine availability sent cases surging. These factors, combined with poor monitoring and easy movement among countries, often unofficially, have meant that Southeast Asia is “becoming a new regional hotspot in the global fight against COVID-19,” a group of experts wrote this week in the medical journal Nature Medicine. They warned that this part of the world “could set back the global success of COVID-19 control in its final mile.”

This ballooning health crisis has collided with, and in some cases been exacerbated by, churning political discontent. The Myanmar military has killed more than 1,000 people since it staged a disastrous coup in February that has further deteriorated the country’s health-care system. The prime minister of Malaysia stepped down amid widespread criticism of his handling of the pandemic. Protests continue almost daily in Thailand over the government’s COVID-19 response. Vietnam’s change of government slowed vaccination plans there.

Economically, the new wave of infections, and the attendant restrictions governments have imposed to stop the virus’s spread, is stalling recoveries, according to Roland Rajah, the lead economist and director of the international-economics program at the Lowy Institute, an Australia-based think tank. Although the latest surge won’t totally derail the region, “it will definitely set it back by a large margin,” he told me. “Many people that had previously moved out of poverty and had increasingly become middle-class consumers will have lost their jobs and livelihoods and be pushed back.”

Myanmar offers perhaps the most extreme example of this shift. The country began a course of economic liberalization and partial democratic development in 2011. It reengaged with the United States after decades as a pariah, a development touted as a signature foreign-policy victory by the Obama administration. But charges of genocide against the military, the February coup, and the rampant spread of COVID-19 have repealed nearly all of the gains of the past decade, both political and economic. A monitor published by the World Bank last month warned of an 18 percent contraction in the country’s economy. Coupled with weak growth during the previous year, the economy is about 30 percent smaller than it would have been had COVID-19 not spread and the military takeover not occurred. Some 1 million jobs could be lost.

A simmering banking crisis since the coup has meant that people wait for hours, often fruitlessly, to obtain a limited amount of cash from banks and ATMs. Some people, seeing an opportunity to make money off the unfolding crisis, act as currency brokers (while pocketing a hefty fee), touting for business in a Facebook group created for people who keep their money deposited in one of the country’s largest banks. At the same time, the health-care system that was already extremely weak from decades of underinvestment has struggled to keep up with the Delta variant. Pleas for oxygen and posts reselling medicine were common on social media during the height of a recent surge in cases.

Other parts of the region face different challenges but look likely to suffer a similar fate. Nicholas Mapa, a senior economist at ING Bank Manila, told me that he expected economic growth in the Philippines to stall and reverse because of lockdown measures reinstated from April until mid-May. The country is reliant on remittances, tourism, and the service industry, areas that have been especially hard-hit by the pandemic. Indonesia, which has had 3.8 million COVID-19 cases and more than 118,833 fatalities (both numbers of which are widely believed to be undercounted), last year saw its economy contract for the first time since the late 1990s, when the Asian financial crisis hit. The rebound that follows is now likely to be weighed down by the new, Delta-driven wave. In Vietnam, disruptions caused by ongoing prevention measures have been particularly felt in the business hubs of Hanoi and Ho Chi Minh City, where manufacturing has been affected, leading to cutbacks and job losses. The country’s government, lauded in the initial stages of the coronavirus crisis for its success in containing infections and deaths, “has applied pretty much the same measures, not much different from what it did in the early phases of the pandemic—which is the problem,” says Linh Nguyen, an associate director at the consultancy Control Risks. Vietnam, she told me, should have more aggressively procured and administered vaccines.

Thailand, which has long been heavily reliant on tourism, has trialed an array of creative programs in an effort to revive the badly hit sector. Following a golf-quarantine program that allowed golfers to wait out their isolation period at a resort on the links, the country last month launched a travel bubble on Phuket, the country’s largest island, that was meant to be a first step toward normalcy. The “Phuket sandbox” as it was dubbed, is an intriguing experiment in tourism for a disease-altered world: Vaccinated travellers from countries deemed low-risk are able to skip the 14-day quarantine mandated elsewhere in Thailand and roam the island freely. Though ongoing, the results have been decidedly mixed, complicated by a recent record surge in COVID-19 cases and related deaths.

There has been some uptick in business, Arthon Uengprasert, who runs a chain of spas across the island, told me, but foot traffic is yet to return to the streets. Cheaper hotels are suffering as luxury resorts offer cut-rate prices, he said. Chinese tourists, in particular, which he estimated accounted for 60 to 70 percent of his clients, have not come back. (Beijing continues to pursue a “COVID-Zero” strategy to handle the pandemic, a policy that has kept the country largely sealed off, and even domestic travel at times suspended and snap lockdowns announced.) The increase in customers Arthon has seen the past two months is “better than nothing,” he told me, but new cases are threatening the program and “a lot of people in Phuket don’t feel like this sandbox scheme really helped.”

Read: Where the pandemic is cover for authoritarianism

These economic struggles will have spillover effects. “Unemployment is not only an economic issue but also poses serious social issues,” Nguyen, of Control Risks, said. She was referring to Vietnam, but the point applies more broadly. In Bangkok, demonstrations against the government, which seized power with a coup in 2014, have been reinvigorated after a pause. Protesters are calling for the prime minister to resign. Much of the anger is directed at the authorities and their flailing response to the outbreak. In recent weeks, demonstrators have clashed with police, who have used tear gas and water cannons to disperse them.

“This government is deeply cynical and completely incompetent, and they don’t have the faith of the people,” Wrisley, the restaurateur, told me. “There is a very serious and troubling amount of discontent.”