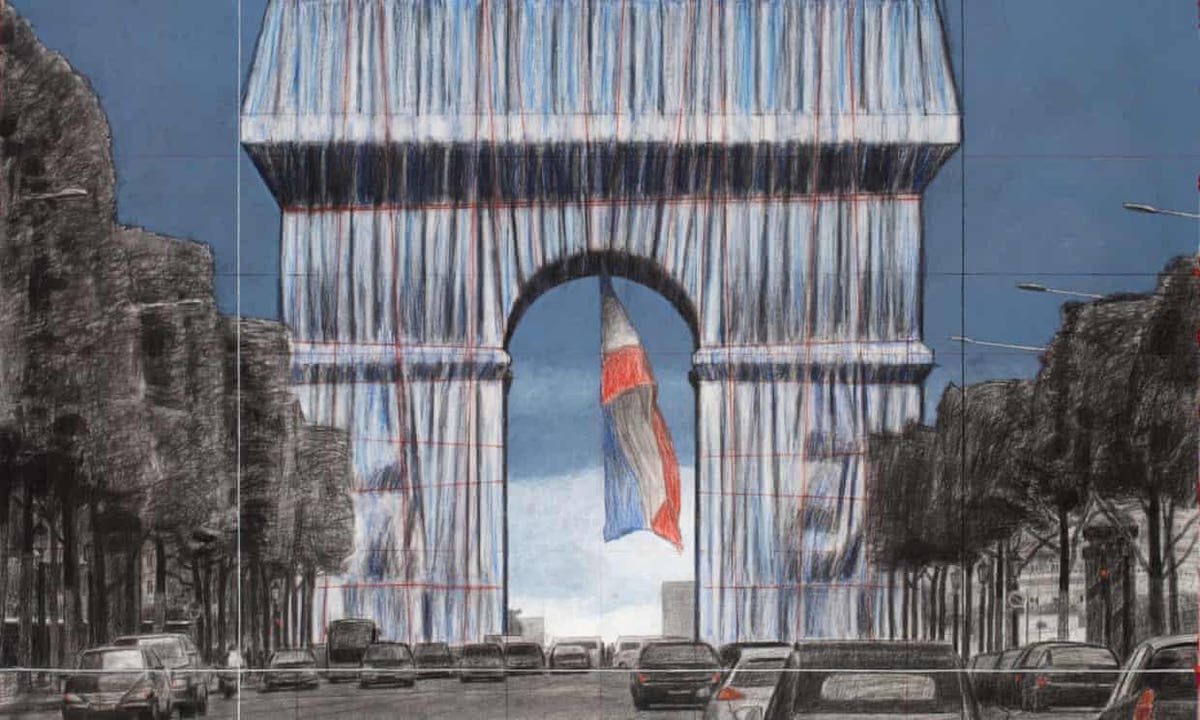 Christo’s ambitious monumental project for Paris, L’ Arc de Triomphe Wrapped, is in process according to the late artist’s instructions and will be unveiled to the public for 16 days next month, from September 18 to October 3.

Three crews are working around the clock to prepare the emblematic, 50-meter-high, 19th century Parisian monument.

Currently, the Arch is surrounded by cranes, scaffolding and protective equipment to ensure the condition of the stonework and sculptures during the wrapping process, which requires 270,000 square feet of recyclable, silver-and-blue polypropylene fabric and nearly 10,000 feet of red rope.

Six decades in the making

The envelopment of the world-recognized, neoclassical monument is a tribute to the late artist-couple Christo and Jeanne-Claude, who dreamed for decades of the project.

“It will be like a living object stimulated by the wind and reflecting the light,” as Christo described his dream project. “The folds will move and the monument’s surface will become sensual. People are going to want to touch the Arc de Triomphe.”

Christo and his wife Jeanne-Claude specialized in creating this kind of spectacular, monumental and ephemeral art installations in public spaces. The Arc de Triomphe Wrapped will become a reality 60 years after the artists conceived it.

“I never though it would ever happen,” Christo said during one of his last interviews while under Covid-19 isolation not long before his death of natural causes at age 84 in May 2020. “But I want you to know that many of these projects can be built without me. Everything is already written.”

According to the history, of the project Christo first made a photomontage of the Arc de Triomphe Wrapped in 1962-63 as he and his French wife, Jeanne-Claude were renting a small room near the monument. He made a collage of it in 1988.

The idea was revived in 2017 and was approved by the Centre des monuments nationaux, the French government institution that manages the Arc de Triomph, with the aim of inaugurating it in 2020.

In 2020, the Centre Pompidou, which was a partner in the project, presented the exhibition Christo and Jeanne-Claude. Paris!, which retraced the couple’s years in Paris from 1958 to 1964, as well as the story of “The Pont Neuf Wrapped,” another of their Parisian projects in 1985.

“We can do this project without him today because they already drew up every visual and artistic aspect of it,” Christo’s nephew Vladimir Javacheff, told The Guardian. “This project is 100% Christo and Jeanne-Claude’s project. It was his wish and we are just realising his vision.”

A life of wrapping

“Christo was born on June 13, 1935 in Gabrovo, Bulgaria,” according to the foundation’s biography. “He left in 1956, first to Prague, Czechoslovakia, and then escaped to Vienna, Austria, in 1957, and to Geneva, Switzerland. In 1958, Christo went to Paris, where he met Jeanne-Claude Denat de Guillebon, not only his wife but life partner in the creation of monumental environmental works of art.”

As planned by the artists, the €14 million cost of installation of L’ Arc de Triomphe Wrapped has been entirely self-financed by Christo’s Foundation thanks to the sale of his preparatory studies, drawings and collages of the project, original models, works from the 1950’s and 60’s and original lithographs dedicated to other subjects.