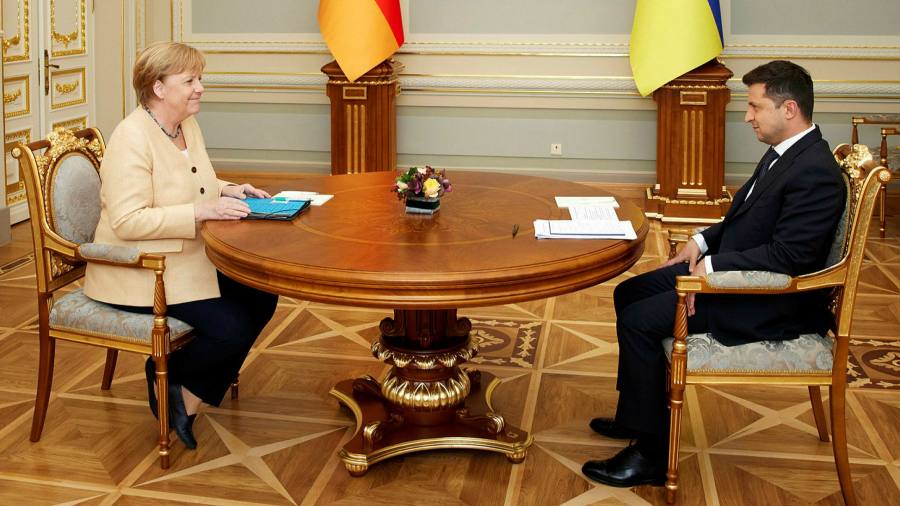 Sign up to myFT Daily Digest to be the first to know about Ukraine news.

The construction of NS2, which will pump Russian gas to western Europe across the Baltic Sea, is of particular concern to Kyiv, which stands to lose $2bn in transit revenues if Moscow cuts supplies through Ukraine. Opponents say the $11bn pipeline also increases Europe’s dependence on Russian energy exports.

“Gas cannot be used as a weapon,” Merkel said on Sunday after meeting Volodymyr Zelensky, Ukrainian president, in Kyiv. “We are for new sanctions if Russia uses this gas pipeline as a weapon,” she added without going into detail.

Describing NS2 as a “danger” to his country, Zelensky said he wanted to “see what Ukraine will get . . . and who will give concrete guarantees” over NS2. “I’m president of a country at war . . . we consider this project a dangerous geopolitical weapon from the side of the Kremlin,” he added.

The Zelensky meeting comes two days after Merkel held talks in Moscow with Russian president Vladimir Putin. There she stressed that Russia had signed a contract obliging it to continue sending gas through Ukraine until 2024, and insisted the agreement “can and should be extended”.

Putin responded by calling on Russia’s European partners to define exactly how much gas they wanted to buy from Russia after that date.

Merkel last month reached a truce with President Joe Biden’s administration over the project, which the US had opposed. As part of the deal, Berlin promised to impose sanctions on Moscow if NS2 was used to threaten the energy security of American allies in the region. It also promised to set up a billion-dollar fund to help Ukraine transition to clean energy.

Merkel’s visit to Kyiv is likely to be one of her last foreign trips before she steps down as chancellor after next month’s federal election.

While Merkel’s CDU party had remained steadfast in its support for the pipeline, Armin Laschet, the conservative bloc’s candidate to replace her as chancellor in September, has said that Germany could block NS2 deliveries if Putin tries to use it to pressure Ukraine.

The centre-left SPD is also in favour of completing NS2, but the Greens have called for the corridor to be scrapped altogether, citing environmental and geopolitical concerns.

NS2’s German supporters argue that a new pipeline is needed to support the country’s energy needs as it phases out coal, and closes nuclear plants. Many industrial companies in need of cheap electricity are also in favour.

Merkel and Zelensky also discussed efforts to help boost green energy in Ukraine as well as failed efforts to achieve a full ceasefire and settlement to the long-running war with Russian-backed separatists in Ukraine’s east.

“Russia is a participant of this conflict,” Merkel said in a swipe at Moscow, which has denied involvement since 2014 despite mounting evidence that it fomented and fuels the war.

During his Friday press conference with Merkel, Putin blamed Kyiv for the impasse saying: “It seems that the leadership of this country has decided in principle to abandon a peaceful solution to the situation.”