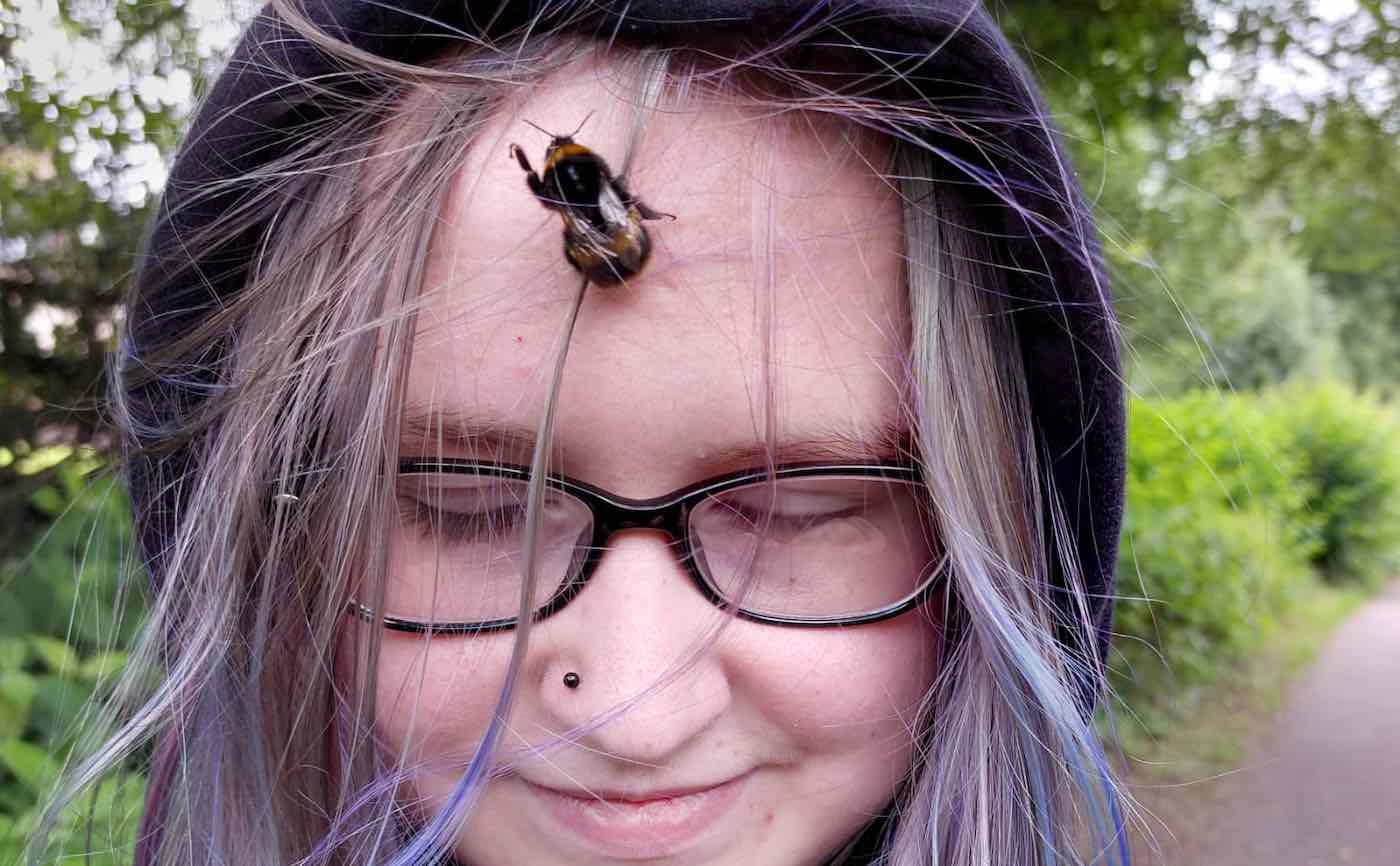 A teenager who rescued a bumblebee says it’s now a loyal pet, following her everywhere, and even sleeping in a jar by her bed.

It all started two weeks ago when Lacey Shillinglaw, 13, spotted the large bumblebee lying in the road while walking her dog. She scooped up the bee and noticed it had a crumpled wing.

She tried to put it in a safer spot, on some flowers in a nearby park, but it refused to stay put, buzzing back over to Lacey and crawling all over her, and after an hour she gave up and headed home with the creature perched on her shoulder.

Despite repeated attempts to leave the insect outside, the buzzy friend has refused to leave Lacey’s side. Now recovered and named Betty, it follows her to the shops and even stayed with Lacey during games at the bowling alley with 14 friends.

She stayed on Lacey throughout both games—for two-and-a-half hours.

“I’m so happy and I just love spending my time with her,” said the girl from Coventry, West Midlands. “She’s so fluffy and I love our friendship.”

On the way home Betty was perching on the girl’s glasses as she went into her local shop to buy milk—shocking other shoppers.

The insect apparently enjoys nibbling on Lacey’s food, but also gets fed sugar water, honey, and strawberry jam. Lacey takes her bee-pal into the garden to feast on flower nectar, but as soon as the teen goes back inside, Betty is right beside her.

At night Lacey tucks Betty up in a little pot beside her bed, and while there is no lid, the animal stays put until morning.

RELATED: Cultivate These Keystone Plants in Your Yard to Help Bees and Butterflies Thrive and Pollinate

During the day Betty nestles on the back of Lacey’s neck, or inside her sleeve, between buzzes around the living room.

“She’s on her 90% of the time during the day, including her face, her glasses, and even in between her toes. It’s so beautiful—just gorgeous.”

Betty apparently even enjoys a stroke between the wings, but steers clear of the rest of the family—mom, dad and two younger siblings.

“We have all the doors open a lot and she’s just never gone —I haven’t the foggiest why,” said Laura.

Bumblebees sting and, unlike honeybees, they can repeatedly sting you without dying—but this has never happened because these two have become Bee-FFs.

WATCH the video below…

Make Some BUZZ With Your Bee-Loving Pals — Share on Social Media!