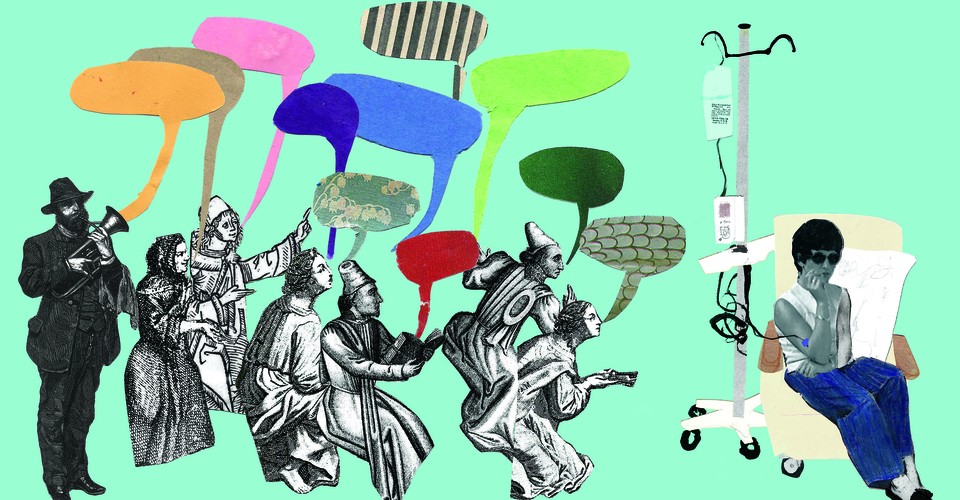 Are you someone who enjoys the unsolicited opinions of strangers and acquaintances? If so, I can’t recommend cancer highly enough. You won’t even have the first pathology report in your hands before the advice comes pouring in. Laugh and the world laughs with you; get cancer and the world can’t shut its trap.

Stop eating sugar; keep up your weight with milkshakes. Listen to a recent story on NPR; do not read a recent story in Time magazine. Exercise—but not too vigorously; exercise—hard, like Lance Armstrong. Join a support group, make a collage, make a collage in a support group, collage the shit out of your cancer. Do you live near a freeway or drink tap water or eat food microwaved on plastic plates? That’s what caused it. Do you ever think about suing? Do you ever wonder whether, if you’d just let some time pass, the cancer would have gone away on its own?

Before I got cancer, I thought I understood how the world worked, or at least the parts that I needed to know about. But when I got cancer, my body broke down so catastrophically that I stopped trusting what I thought and believed. I felt that I had to listen when people told me what to do, because clearly I didn’t know anything.

Much of the advice was bewildering, and all of it was anxiety-producing. In the end, because so many people contradicted one another, I was able to ignore most of them. But there was one warning I heard from a huge number of people, almost every day, and sometimes two or three times a day: I had to stay positive. People who beat cancer have a great positive attitude. It’s what distinguishes the survivors from the dead.

There are books about how to develop the positive attitude that beats cancer, and meditation tapes to help you visualize your tumors melting away. Friends and acquaintances would send me these books and tapes—and they would send them to my husband, too. We were both anxious and willing to do anything in our control.

But after a terrible diagnosis, a failed surgery, a successful surgery, and the beginning of chemotherapy, I just wasn’t feeling very … up. At the end of another terrible day, my husband would gently ask me to sit in the living room so that I could meditate and think positive thoughts. I was nauseated from the drugs, tired, and terrified that I would leave my little boys without a mother. All I wanted to do was take my Ativan and sleep. But I couldn’t do that. If I didn’t change my attitude, I was going to die.

People get diagnosed with cancer in different ways. Some have a family history, and their doctors monitor them for years. Others have symptoms for so long that the eventual diagnosis is more of a terrible confirmation than a shock. And then there are people like me, people who are going about their busy lives when they push open the door of a familiar medical building for a routine appointment and step into an empty elevator shaft.

The afternoon in 2003 that I found out I had aggressive breast cancer, my boys were almost 5. The biggest thing on my mind was getting the mammogram over with early enough that I could pick up some groceries before the babysitter had to go home. I put on the short, pink paper gown and thought about dinner. And then everything started happening really fast. Suddenly there was the need for a second set of films, then a sonogram, then the sharp pinch of a needle. In my last fully conscious moment as the person I once was, I remember asking the doctor if I should have a biopsy. The reason I asked was so that he could look away from the screen, realize that he’d scared me, and reassure me. “No, no,” he would say; “it’s completely benign.” But he didn’t say that. He said, “That’s what we’re doing right now.”

Later I would wonder why the doctor hadn’t asked my permission for the needle biopsy. The answer was that I had already passed through the border station that separates the healthy from the ill. The medical community and I were on new terms.

The doctor could see that I was in shock, and he seemed pretty rattled himself. He kept saying that he should call my husband. “You need to prepare yourself,” he said, twice. And once: “It’s aggressive.” But I didn’t want him to call my husband. I wanted to tear off my paper gown and never see that doctor, his office, or even the street where the building was located ever again. I had a mute, animal need to get the hell out of there. The news was so bad, and it kept getting worse. I couldn’t think straight. My little boys were so small. They were my life, and they needed me.

Three weeks later, I was in the infusion center. Ask Google “What is the worst chemotherapy drug?” and the answer is doxorubicin. That’s what I got, as well as some other noxious pharmaceuticals. That oncologist filled me and my fellow patients up with so much poison that the sign on the bathrooms said we had to flush twice to make sure every trace was gone before a healthy person—a nurse, or a family member—could use the toilet. I was not allowed to hug my children for the first 24 hours after treatment, and in the midst of this absolute hell—in the midst of the poison and the crying and the sorrow and the terror—I was supposed to get a really great positive attitude.

The book we were given several copies of, which was first published in 1986 and has been reissued several times since, is titled Love, Medicine and Miracles and was written by a pediatric surgeon named Bernie Siegel. He seems less interested in exceptional scientific advances than in “exceptional patients.” To be exceptional, you have to tell your body that you want to live; you have to say “No way” to any doctor who says you have a fatal illness. You have to become a channel of perfect self-love, and remember that “the simple truth is, happy people generally don’t get sick.” Old angers or disappointments can congeal into cancer. You need to get rid of those emotions, or they will kill you.

In 1989 a Stanford psychiatrist named David Spiegel published a study of women with metastatic breast cancer. He created a support group for half the women, whom he taught self-hypnosis. The other women got no extra social support. The results were remarkable: Spiegel reported that the women in the group survived twice as long as the other women. This study was hugely influential in modern beliefs about meditation and cancer survival. It showed up in the books my husband read to me, which were filled with other stories of miraculous healings, of patients defying the odds though their own emotional work. But I was so far behind. From the beginning I couldn’t stop crying. I began to think I was hopeless and would never survive.

I needed help, and I remembered a woman my husband and I had talked to in the first week after my diagnosis. Both of us had found in those conversations our only experience of calm, our only reassurance that we were doing the right things. Anne Coscarelli is a clinical psychologist and the founder of the Simms/Mann-UCLA Center for Integrative Oncology, which helps patients and their families cope with the trauma of cancer. We had reached out to her when we were trying to understand my diagnosis. Now I needed her for much more.

For the first half hour in her office, we just talked about how sick I felt and how frightened I was. Then—nervously—I confessed: I wasn’t doing the work of healing myself. I wasn’t being positive.

“Why do you need to be positive?” she asked in a neutral voice.

I thought it should be obvious, but I explained: Because I didn’t want to die!

Coscarelli remained just as neutral and said, “There isn’t a single bit of evidence that having a positive attitude helps heal cancer.”

What? That couldn’t possibly be right. How did she know that?

David Spiegel was never able to replicate his findings about metastatic breast cancer. The American Cancer Society and the National Center for Complementary and Integrative Health say there’s no evidence that meditation or support groups increase survival rates. They can do all sorts of wonderful things, like reducing stress and allowing you to live in the moment instead of worrying about the next scan. I’ve learned, whenever I start to get scared, to do some yoga-type breathing with my eyes closed until I get bored. If I’m bored, I’m not scared, so then I open my eyes again. But I’m not alive today because of deep breathing.

When I began to understand that attitude doesn’t have anything to do with survival, I felt myself coming up out of deep water. I didn’t cause my cancer by having a bad attitude, and I wasn’t going to cure it by having a good one.

And then Coscarelli told me the whole truth about cancer. If you’re ready, I will tell it to you.

Cancer occurs when a group of cells divide in rapid and abnormal ways. Treatments are successful if they interfere with that process.

That’s it, that’s the whole equation.

Everyone with cancer has a different experience, and different beliefs about what will help. I feel strongly that these beliefs should be respected—including the feelings of those who decide not to have any treatment at all. It’s sadism to learn that someone is dangerously ill and to impose upon her your own set of unproven assumptions, especially ones that blame the patient for getting sick in the first place.

That meeting with Anne Coscarelli took place 18 years ago, and never once since then have I worried that my attitude was going to kill me. I’ve had several recurrences, all of them significant, but I’m still here, typing and drinking a Coke and not feeling super upbeat.

Before I left that meeting, I asked her one last question: Maybe I couldn’t think my way out of cancer, but wasn’t it still important to be as good a person as I could be? Wouldn’t that karma improve my odds a little bit?

Coscarelli told me that, over the years, many wonderful and generous women had come to her clinic, and some of them had died very quickly. Yikes. I had to come clean: Not only was I un-wonderful. I was also kind of a bitch.

God love her, she came through with exactly what I needed to hear:  “I’ve seen some of the biggest bitches come in, and they’re still alive.”

And that, my friends, was when I had my very first positive thought. I imagined all those bitches getting healthy, and I said to myself, I think I’m going to beat this thing.