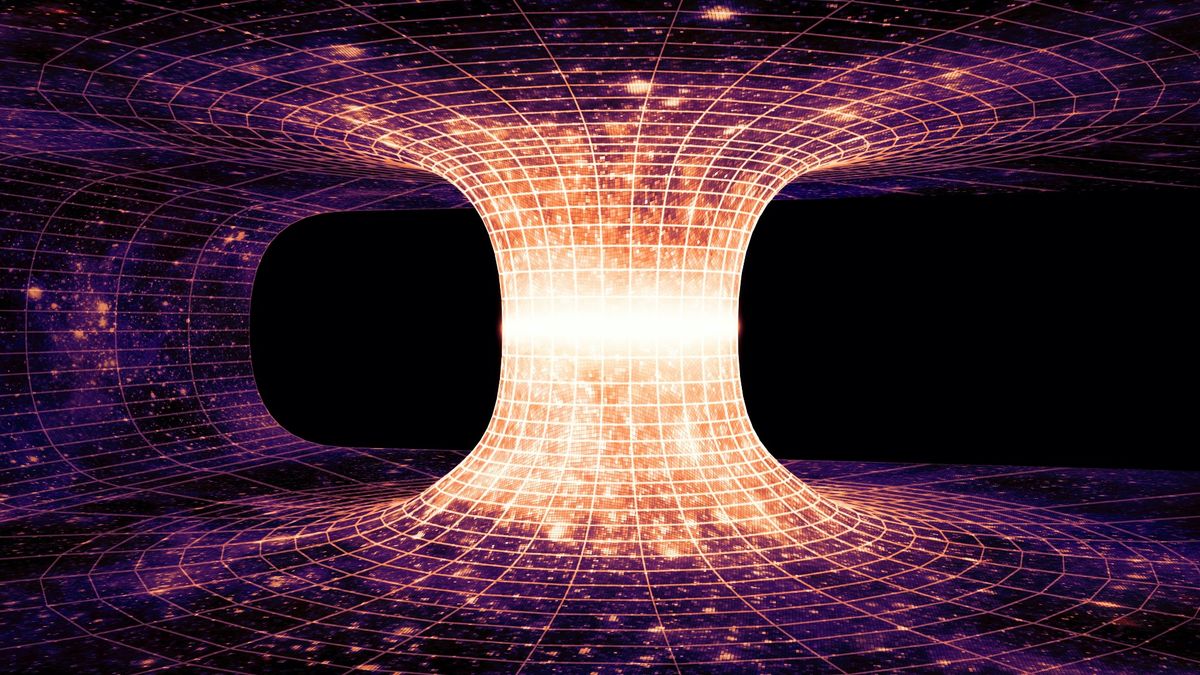 Interested in scooting through a wormhole, the ultimate cheat-code through space and time? Perhaps you’d like to hop from star system to star system across the universe without breaking a sweat? But first, you’d better make sure your wormhole is traversable.

“Any traveler trying to cross a wormhole that does not satisfy this will be crushed inside as the tunnel collapses,” João Rosa, a physicist at Aveiro University in Portugal, told Live Science.

Rosa is attempting to virtually “build” a stable, traversable wormhole, one that can be safely crossed without the theoretical passageway collapsing or trapping its occupant. And he has recently found that it is indeed possible, but only if we tweak our understanding of gravity.

The problem of traversability

Wormholes are deceptively easy to build — on paper. You start with a theory of gravity. In Einstein’s theory of general relativity, gravity defines the relationship between matter and energy, and space and time. The trick to building a wormhole is to find a configuration of matter and energy that allows you to form a tunnel — usually called a “throat” in wormhole research — bridging two distant points in space.

In principle, that throat can be as long or as short as you want, but the more interesting wormholes happen when the throat is far shorter than the normal distance between two points, making the wormhole a convenient shortcut. Oh, and wormholes can also act as time machines, sending you into the future or past, depending on how they’re constructed.

The idea of such a whimsical shortcut has captured the imaginations of scientists and science-fiction writers for decades.

“The possibility to visit other stars (or even other galaxies), possibly finding alien civilizations, and the possibility to revisit the past or not having to wait for the future have been part of the human imagination and fantasy for a long time, and wormholes provide a (relatively) simple and unified solution for both of these problems,” Rosa told Live Science in an email.

But wormholes constructed based on the criteria laid out by general relativity suffer a major problem: They’re not actually traversable. The entrances of general relativity wormholes are hidden behind event horizons, which are one-way barriers in space. That means if you were to enter the wormhole, you could never leave, which would defeat the purpose.

The other problem is that they are ridiculously unstable. The moment even a single photon, or light particle, enters the throat, the whole wormhole catastrophically collapses before that packet of light can escape.

In order to solve these problems in general relativity and stabilize a wormhole, a cosmic traveler must fashion the wormhole out of an incredibly exotic ingredient, a form of matter that has negative energy or negative mass. Negative mass (also known as exotic matter) is exactly what it sounds like: If something weighs negative 10 pounds, it would have negative mass. Scientists have not observed negative mass anywhere in the universe. Negative energy is slightly more attainable, which is just a condition where the energy in a particular location is negative relative to its surroundings, but that can only be achieved at microscopic, quantum scales.

Related: 8 ways you can see Einstein’s theory of relativity in real life

“The presence of this matter is essential as it prevents the wormhole throat from collapsing upon a traveler, but it is also problematic,” Rosa explained. “It presents a negative average energy density, an extremely rare characteristic of matter in the universe that is only observed in very specific situations at the quantum level.”

Since such matter is so rare, building an entire wormhole out of the exotic matter would seem impossible in our universe.

But all this talk about wormholes is predicated on general relativity. And while that theory of gravity has survived every single observational and experimental test thrown at it over the last century, we know that general relativity isn’t the last word on gravity. Relativity is incapable of describing the centers of black holes, the earliest moments of the universe and the link between itself and quantum physics.

So maybe a new, improved theory of gravity would allow wormholes to exist.

That’s exactly what Rosa investigated in a new paper published online July 29 to the preprint journal arXiv, meaning the study has yet to be reviewed by peers in the field.

Rosa employed a tweaked form of gravity called generalized hybrid metric-Palatini gravity. This theory of gravity is built on general relativity, but allows more flexibility in relationships between matter and energy, and space and time.

Related: Science fact or fiction? The plausibility of 10 sci-fi concepts

“What happens is that these gravitational effects needed to guarantee the traversability of the wormhole happen naturally if one modifies gravity, and exotic matter [matter with negative mass] is no longer needed to serve this purpose,” Rosa explained.

What’s next? Rosa wants to test this particular theory of modified gravity. “This is just a very small step towards the final goal: One must now use experimental data and observations (e.g. gravitational waves and trajectories of stars near the center of the Milky Way) to test and (hopefully) confirm the validity of these theories,” Rosa wrote.

While general relativity has so far explained all measurements of gravity (including gravitational waves and the vicinity of black holes), the story isn’t over. Future observations might find a crack in that venerable theory, and if generalized hybrid metric-Palatini gravity better explains cosmic observations, then wormholes made for travel might be possible.

But the questions wouldn’t end there. Wormholes can also act as time machines, so a viable wormhole solution would mean that time travel into the past is possible; that, of course, raises all sorts of difficult problems (like the so-called “grandfather paradox” and questions about causality). Knowing for sure that traversable wormholes could exist wouldn’t just make our sci-fi dreams come true, it would totally upend our understanding of physics.