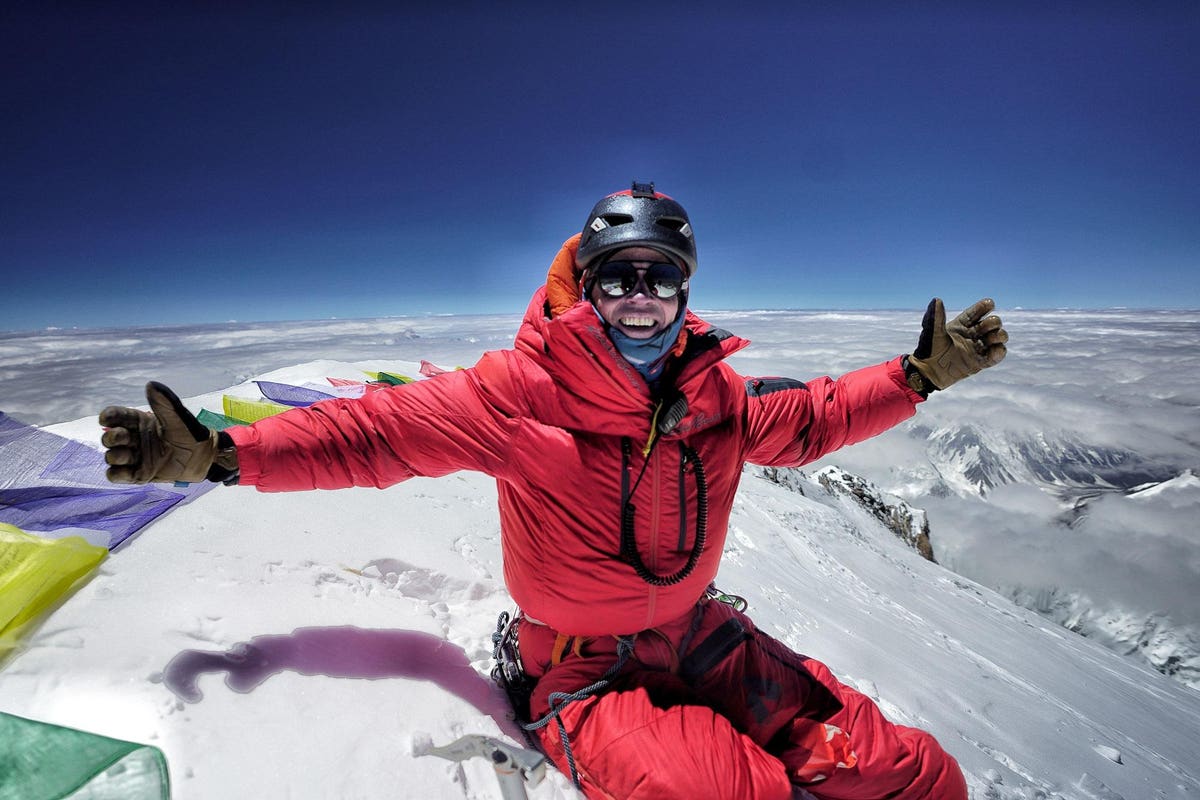 Most people have never worried about Tibetan yaks breaking their bottle of Pinot Noir up the trail to Everest base camp, but mountaineer Adrian Ballinger has different wine problems than the rest of us. He’s summited Everest eight times, accomplished the first 8000 meter ski descent from the top of Manaslu and climbed K2 without supplemental oxygen — but his biggest challenge has been finding the right wine to bring up any mountain and the best way to carry it there. After founding Alpenglow Expeditions in 2004, Ballinger’s latest project is being a co-founder of Revelshine Wines, which produces California wines in light recyclable aluminum bottles (sourced from organically-farmed vineyards) geared towards outdoor adventurers. I spoke with Ballinger about drinking wine in high places and where you have to go to find a good glass of Chhaang.

What was your first experience with wine?

I’m originally from England, and lived there until I was 6, before moving to the U.S. Wine is more a traditional part of British life. My dad loved wine, and when I reached 12 I was allowed to have a glass mixed with water at our Sunday roast dinners. Those Sunday dinners were mandatory every week until college.

How did your climbing career begin?

I started rock climbing when I was 12 as well. I never imagined it as more than a hobby until college, when I was invited to climb Cotopaxi in Ecuador. My first 20,000 ft. mountain. That challenged me at different level than any sport ever had. I also discovered I’m genetically predisposed to altitude. I want to climb Everest! That’s expensive, so when I finished school I started guiding. My family always thought I’d be a doctor and it would take a year to get out of my system. That was 20 years ago.

Not only have you climbed Mount Everest, you once did it twice within three weeks.

I’ve summited Everest eight times, once without oxygen. Traditionally the sherpas go up first on Everest and do the fixed ropes so the clients have additional safety. One year I had the opportunity to go with them. It was 9 sherpas plus me. It was unbelievable to see the mountain with no ropes or footprints. Then I still had my clients, so I came down turned around and went back.

What’s the highest altitude you’ve ever had a drink?

It was probably the Advanced Base Camp on the north side of Mount Everest at 21,000 feet. That’s higher than any mountain in the United States. I brought a little flask — something to take edge off.

Any safety concerns about enjoying a drink at high altitude?

It’s not about where it is as much as making sure it’s at the point where you know you’re safe. The activity is finished for the day, you’re at camp with no risk of avalanche you no longer have to make decisions that affect safety. Most of my time on big mountains is all about mitigating risk. I do not consider myself an adrenaline junkie. If I feel adrenaline that means I’ve put myself in a position where I can get killed. I make go or no-go decisions. It’s not until we’re all back down that I can finally breathe.

And then you can enjoy some wine.

A team might spend two and a half intense months together and you want base camp to be as normal as possible. It’s high up, but after a month you acclimate and it helps to give the brain a break from the experience. A glass of wine with dinner is something that brings normalcy. That’s why I’m excited about Revelshine. Glass bottles break on yaks! You bring boxed wine and no one wants to drink it. This is an unbreakable bottle I can bring to base camp in Nepal and it’s quality wine I want to drink.

How did you get involved with Revelshine?

Revelshine found me. Jake Bilbro was looking for athlete co-founders interested in a brand relationship who actually loved wine. Living in California, some of my favorite trips are Napa or Sonoma. He heard I brought cans of wine with me on climbs instead of beer. We connected over adventure and wine.

What makes bringing Revelshine better than wine in a can?

One, I think Revelshine is high quality, but the other thing – when I think of a can of wine it’s something only I drink. A bottle is meant to be shared. You pour and pass it around and that has a different feel to me. And I love the ability to close it again. A lot of time I’m bringing wine on these adventures where I just want a small taste of something to close the day out. One bottle lives in my pack all the time now.

Your fiancée Emily Harrington is also a climber. How do you both navigate romance and the risks you know the other person is taking?

We talk honestly and openly about why we do the risky expeditions. We hold each other accountable — are you doing this for media sponsors or is this important to you? Beyond that it’s a lot of trust in each other that we do everything we can to come back home. I want to live a long life and enjoy everything out of it.

What was one of your riskiest climbs?

After climbing Everest without oxygen I wanted to attempt the second-highest mountain, K2, without oxygen as well. It’s a much more technical and dangerous mountain. The fatality rate is 20%. It’s one of the trips we agreed that this is one shot. I’m going to go and if it doesn’t feel right it’s not going to become a life mission until I get myself killed. In 2019 I went with close friends, got lucky and got a window. Now I’m excited I never have to go back.

You’ve traveled to many amazing places. Any food and drink experiences that stand out?

I love the immersion that happens with traveling internationally and food and drink are a huge part of that. One that connects with me the most: in the Everest region each Sherpa family makes their version of a barley rice kind of beer called Chhaang. They brew and ferment it inside their homes and every family is proud of their own recipe and have barrels from different seasons, some stronger some more flavorful. Drinking Chhaang is a huge part of every trip to Nepal.

I’m paraphrasing, but I once read “mountain climbing is the only activity where people celebrate at the halfway mark, before the hard part.”

That’s 100% true. We try to get clients into the mindset that the summit is the most dangerous part of the trip. It’s the furthest point from doctors and safety. When we summit Everest, people think it’s all celebrations – I tell them you have three minutes to high five and take that photo because the next 20 hours are the most difficult.