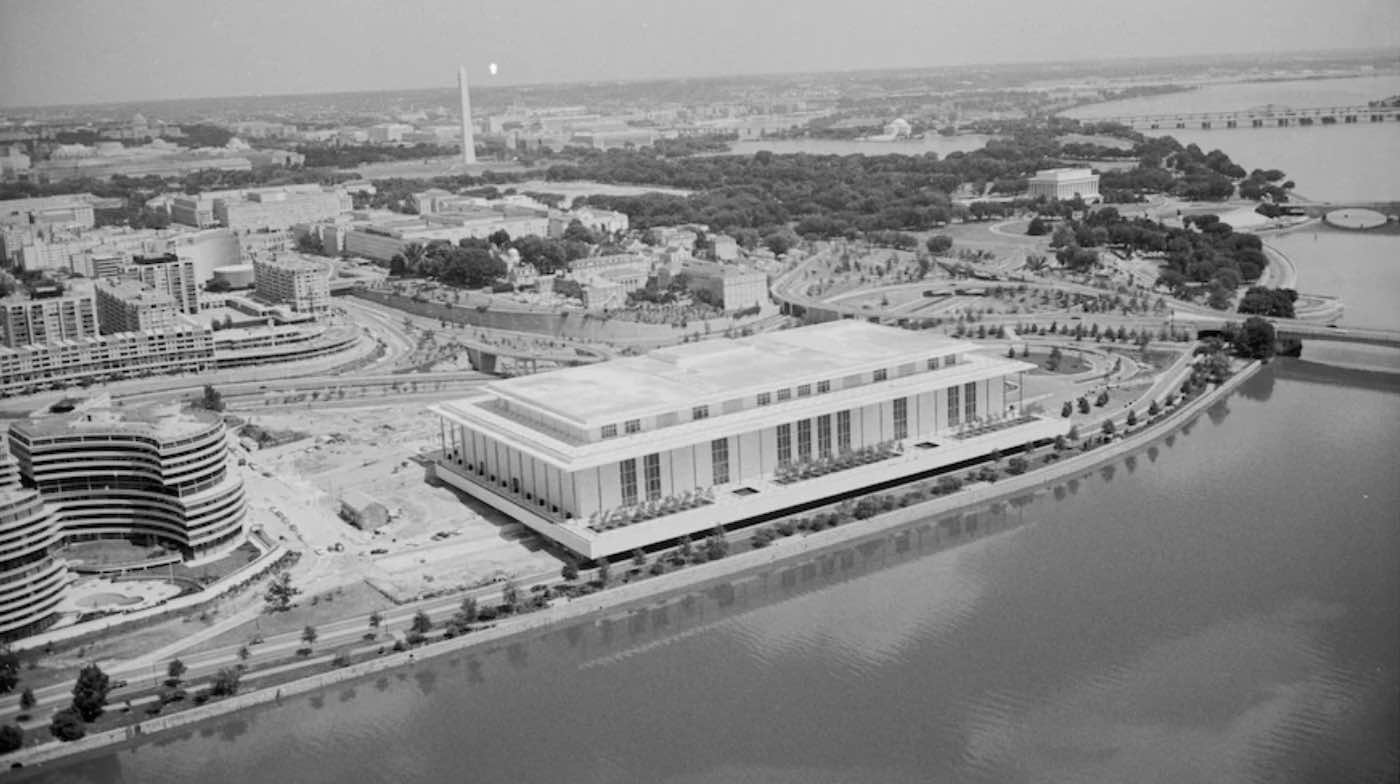 50 years ago today, the John F. Kennedy Center for the Performing Arts held its grand opening, with a performance of Leonard Bernstein’s Mass, which was commissioned for the occasion by Jacqueline Kennedy to honor her late husband, the first Catholic U.S. president.

With its opera house, symphony hall, recital space, and theaters, the Kennedy Center has launched numerous new musicals—such as Pippin, Annie, and Les Misérables—and hosted memorable premieres of dance and music. Its educational and outreach initiatives are innumerable, and almost entirely funded through ticket sales and gifts from individuals, corporations, and private foundations.

Authorized by Congress in 1958, the law requires that its programming be sustained through private funds, but the center represents a public–private partnership, with the U.S. government paying for the building’s upkeep.

The Kennedy Center’s 50th Anniversary Celebration Concert, to be held on September 14 in the Concert Hall, will be broadcast across the nation on October 1 on PBS. Free to the public will be a range of free activities on the weekends of September 11-12 and 18-19, with dance, yoga, and meditation on the lawn and throughout the campus. Learn what other free events are happening during the year in DC, and WATCH an amazing video with highlights of 40 years of the Kennedy Center Honors… (1971)

“To further the appreciation of culture among all the people. To increase respect for the creative individual, to widen participation by all the processes and fulfillments of art—this is one of the fascinating challenges of these days.”

As the concluding event of the Center’s 50th Anniversary year, Leonard Bernstein’s MASS will return to the Center in September 2022. Directed by Francesca Zambello, this monumental work will be re-staged in the Concert Hall and feature the NSO along with 2020 Marian Anderson Award winner Will Liverman as the Celebrant, speaking in both Latin and English.

And, on this day in 2005, Russians flew humanitarian aid to the United States following Hurricane Katrina, landing three Il-76 aircraft at a disaster aid staging area in Little Rock, Arkansas, marking the first time Russia’s international aid group EMERCOM had flown such a mission to North America. The delivery of more than 60 tons of medical supplies, rations, tents, blankets and 6 tons of drinking water, also set in motion a cooperative relationship between the two countries’ two disaster aid agencies, FEMA and EMERCOM.

RELATED: The Idea That Turned Russian Warheads Into American Electricity

Also, on this day 55 years ago, the first episode of Star Trek, featuring “Space: the final frontier” and the USS Enterprise, began its three-year mission of exploration on TV screens across America.

The science-fiction television show created by Gene Roddenberry was set in the 23rd century and starred William Shatner and Leonard Nimoy. The NBC show has since spawned multiple TV series, as well as comics, toys and a movie empire. Fans of the franchise, called Trekkies, often cite the show as an inspiration for technological inventions like the cell phone and computerized tablets. The Original Series which included one of television’s first multiracial casts is also noted for its progressive civil rights stances. (1966)

And 53 years ago today, Arthur Ashe became the first black male to win the US Open tennis championship. In order to compete in the historic event (and avoid the Vietnam war) the Army 1st Lieutenant who was discharged one year later, accepted his brother Johnnie’s decision to serve an additional tour in Vietnam in Arthur’s place. Ashe also was the only black man ever to win the singles title at Wimbledon, the US Open, and the Australian Open. (1968)

91 years ago today, the first roll of Scotch Tape was sold. Designed by a 3M engineering school dropout who had a limited background in chemistry, the transparent tape rose quickly in popularity even in the midst of the Great Depression. Dick Drew, the 23-year-old research assistant, realized the torment auto painters were struggling with trying to create straight lines on two-toned cars, so he set himself to solve the task, and developed semi-sticking masking tape that had just the right amount of adhesive—a formula containing cabinetmaker’s glue, kept sticky with the addition of glycerin. The product he created, Scotch Brand Masking Tape, adhered strongly yet stripped off easily without mucking up paint. It was the first of the growing family of 3M tapes. But it was Drew’s second innovation that would really set the world abuzz.

DuPont had developed cellophane, a moisture-proof packaging material. Another 3M employee, who was considering it for packaging their masking tape, showed a sample to Drew, who immediately saw its potential to help bakers, meat packers, and grocers who had adopted cellophane food wrap and were clamoring for a moisture-proof and attractive way to seal their new packaging.

3M sent its first roll of cellophane tape to a prospective client, who enthusiastically endorsed it. Interestingly, the use of the term ‘Scotch’ in the name was a pejorative meaning ‘cheap’. The name ‘stuck’ after Drew was heard one of his test auto-painters exclaim, “Take this tape back to those Scotch bosses of yours and tell them to put more adhesive on it!” In fact, Scotty McTape, a kilt-wearing cartoon boy, became the brand’s mascot for two decades, and the familiar tartan design, mirrored the well-known Wallace tartan. (1930)

Happy Birthday to the singer-songwriter Pink, who turns 42 years old today. Before fame, she dreamed of being an Olympic athlete from Pennsylvania, but developed asthma and started writing lyrics. Her collaborative rendition of the song Lady Marmalade for the Moulin Rouge soundtrack rose to #1 and earned Pink one of her three Grammy Awards. From her R&B-influenced double-platinum debut album Can’t Take Me Home released in 2000 to her catalogue of seven pop LPs, her raspy voice and catchy dance hooks have generated sales of over 90 million records worldwide, making her one of the world’s best-selling musical artists. In 2018, she was named to the Forbes list of Highest Paid Female Celebrities, with earnings of $52 million. WATCH a 2019 interview… (1979)