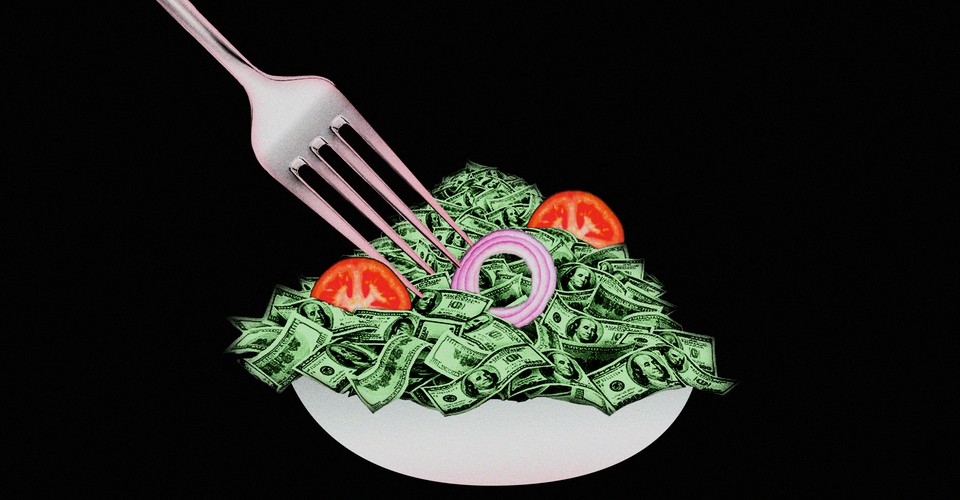 Jonathan Neman really seemed to think he was onto something. Last week, in a lengthy, now-deleted post on LinkedIn, the CEO and co-founder of the upscale salad chain Sweetgreen expounded on a topic that might seem a little far afield for a restaurant executive: how to end the pandemic. “No vaccine nor mask will save us,” he wrote. (The vaccines, it should be noted, have so far proved to be near-miraculously effective at saving those who get them.) Instead, he lamented that Americans are simply too fat to survive COVID-19, a reality that he says could be addressed with “health mandates.”

Neman did not go into many specifics about how health should be mandated, or what such mandates would mean for disabled people, though efforts at national improvement that focus on those designated as physiologically undesirable have historically ended poorly for them. He did offer one proposal: The federal government could decide which types of food Americans are allowed to eat. More specifically, he argued, the government could ban or heavily tax some foods, including any kind of processed food, a category so meaninglessly broad, it would wipe out virtually everything stocked on the inner aisles of the average grocery store—not to mention much of what is sold by Sweetgreen’s competitors.

Neman faced backlash after Vice’s Edward Ongweso Jr. reported on the post. The CEO apologized to Sweetgreen’s staff in an email, and later, at a town-hall meeting with employees, acknowledged that indeed “Sweetgreen alone is not going to solve this. Salads alone are not going to solve this,” according to a recording obtained by Vice. Even so, Neman defended the intent of the proposal. And Ongweso has since found evidence that Neman previously advocated similar measures within the company. (Sweetgreen did not respond to multiple interview requests for this article.)

It is, of course, almost hilariously convenient for a man who’s made millions slinging expensive lettuce to believe that the future of the republic might depend on the feds force-feeding people the food he already sells; that salad is the ideal medicine for an incredibly contagious respiratory virus might not be a trustworthy argument coming from a literal salad millionaire. More interesting, though, is how telling Neman’s salvational ramblings are of a harmful conviction about health that America’s wealthiest, most privileged class long ago laundered into common sense: that people who, unlike them, end up sick or poor have simply refused to make the right choices and help themselves. Speculating that America’s health-care crisis could be solved if everyone just had to eat some salad is not only lazy and wrong; it’s perpetuating an attitude that is making health—and the pandemic—worse for millions of people.

As proof for his idea, Neman offered an argument that’s often cited by people looking to reframe America’s pandemic failures as those of individual responsibility instead of institutional rot: According to one CDC study, 79 percent of people hospitalized with severe COVID-19 in the United States in 2020 had a BMI categorized as overweight or obese. The percentage is alarming in a vacuum, and the CDC does assert that high body weight is a risk factor for severe COVID-19. But it’s far from clear that it’s a major risk factor—the CDC’s own numbers suggest that almost 74 percent of all Americans over the age of 20 fall into that same BMI range, which means that, even if weight had no correlation to or effect on outcomes, you’d still expect about three-quarters of those hospitalized with COVID-19 to have a high BMI.

BMI’s uselessness as a proxy for health is a fight for another day, but even if you leave out confounding factors that might help explain the five-point difference—for example, that poor people are more likely to have a high BMI, to delay seeking costly medical treatment, and to work in-person jobs that expose them to the coronavirus—it hardly justifies making cookies illegal. If a bodily variation causes a difference in COVID-19 risk, that doesn’t mean it must be eliminated by force. If you disagree, I’d love to hear your plan for dealing with men, who are much more likely to be hospitalized or die after catching COVID-19 than women.

Neman appended to his LinkedIn post a link to a CNN article that details a report on the global distribution of 2020’s COVID-19 deaths. The report, released in March by the World Obesity Federation, found that the overwhelming majority of deaths occurred in countries where more than half the population has an obese or overweight BMI. CNN used Vietnam’s impressive track record against the pandemic and the nation’s low obesity rates as a foil for Americans’ own failures, both in the pandemic and on the scale.

But ample evidence exists that Vietnam didn’t contain the pandemic because its people are slender. The country relied on the kinds of interventions that aren’t very profitable to outside businesses: proactive governmental action, robust contact tracing, strategic testing, and free food and housing for those who need to quarantine. Vietnam also benefits from a populace whose median age is six years younger than that of the U.S.—a meaningful difference when the worst outcomes of a disease are more closely associated with advanced age than anything else.

The CNN article omits any information about Vietnam’s COVID-19 response or other risk-mitigating population differences. It also doesn’t disclose that the World Obesity Federation is an advocacy group that receives funding from corporations who profit when people are pressured to get thin: a number of pharmaceutical companies that already sell weight-loss drugs or have new ones in much-hyped clinical trials, as well as WW, the diet company formerly known as Weight Watchers.

Neman gets one basic thing right, though, which is what helps these kinds of ideas gain acceptance even among those they might harm, or among those notionally opposed to state punishment for poor health: Fresh, high-quality, nutritionally dense food plays a distressingly minor role in the diet of millions of Americans. Before the government starts slapping chicken nuggets out of your hand, though, it would be useful to consider why that is, beyond the apparent belief that most Americans are too stupid or gluttonous to be given a choice in what they eat. For many of them, the choices don’t exist. Research has shown that poor people know what they’re missing from their diets, and they want quite badly to have those things. Still, the gap between how well high-income people eat and how well low-income people eat has continued to widen.

The problem isn’t them. High-quality ingredients are expensive and time-consuming to prepare when they’re available at all, and people with low wages and long hours—the people most likely to have suffered catastrophic effects of the pandemic, no matter their weight—do not have much time or money to spare. Sweetgreen and restaurants like it exist precisely because so many Americans are time-poor, but they address the problem of food prep only for those who can regularly purchase $15 greens-and-grains bowls. People who now must subsist on frozen dinners and the McDonald’s dollar menu wouldn’t start eating salads topped with salmon and roasted vegetables if their current food sources were taken away, even if they wanted to. Many of them would simply go hungry, which I suppose is one way to lose weight.

Requiring people to prove that they’ve made all the right choices before their lives are valued underpins virtually every cruelty in American health. Lots of people feel no apparent shame in asserting that those without full-time jobs don’t deserve the same access to medical care as those who are more economically productive, or that people with addictions deserve to die or rot in jail for their failures of discipline, or that hospitals should deny life-saving care for COVID-19 to people who are not yet vaccinated.

The people who benefit most from this belief system tend to be those who have parlayed personal advantages into even more enormous personal wealth; they were born on third base and swear they hit a triple. One of Neman’s most prolific forebears in this regard is the Whole Foods co-founder John Mackey, who has been arguing publicly against affordable health care since at least 2009, and who said in January, during the pandemic’s deadly winter spike, that health care wouldn’t be necessary if people would just make the right lifestyle choices, and that medicine wouldn’t solve things; his father, who was an investor in Whole Foods, was also the CEO of a health-care company. Neman and his Sweetgreen business partners met while in school at Georgetown University, and their parents, who helped fund Sweetgreen’s founding, all own their own companies. This is Marie Antoinette telling starving French peasants to eat cake, except the cake story is apocryphal, and this one happened for everyone to see on LinkedIn.

No room exists in this worldview for generosity toward others, or for a basic belief in the inherent value of human life. It’s a policy of coercion and deprivation. Absent from Neman’s call for mandates was any intimation that perhaps the government should use its power to ensure that no American has to choose between low-quality food and starvation; that everyone can find fresh, nutritionally dense, affordable foods in their neighborhood; that people have enough time away from work to prepare meals for themselves and their families if they so choose. Those solutions don’t do much to reinforce the superiority complex of the wealthy, and they probably wouldn’t be very profitable for companies that sell high-end groceries, premade salad, weight-loss pills, or diet plans.