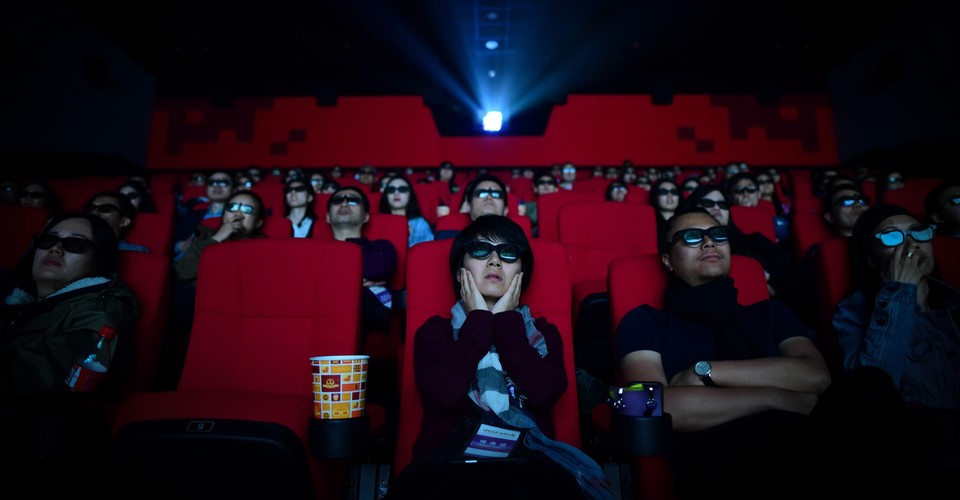 Chloé Zhao, the director of Nomadland, is new Hollywood royalty. In April, she made history as the first woman of color to win Best Director at the Oscars. In November, her big-budget Marvel movie, Eternals, will arrive in theaters. She commands so much admiration from the industry right now that she gets away with showing up to the red carpet of a film premiere in jeans.

Zhao was, for a time, just as warmly regarded in China. Born in Beijing, she also has ties to Chinese entertainment royalty: Her stepmother, Song Dandan, is one of the most celebrated comic actresses in the country. And Zhao’s success in Hollywood made her the model of a crossover artist, bringing Chinese sensibilities to American filmmaking. In March, the Communist Party–owned newspaper Global Times anointed her “the pride of China.”

But then an eight-year-old interview in which Zhao called the country a place “where there are lies everywhere” spread online. Beijing responded by deleting social-media celebrations of her Oscar win and canceling the release of Nomadland. Eternals, which should have been a shoo-in to screen across China, now faces a potential ban. Swiftly and quietly, Zhao’s native country appears to have disowned her—at least, for now. (Zhao declined to comment on the matter.)

Hers is a cautionary tale—and a common one these days. No matter their clout in Hollywood, filmmakers and actors have always been subject to bosses who decide which movies get to soar at the box office and which are left to languish. Now, more than ever before, that boss is Beijing.

In 2020, the Chinese film market officially surpassed North America’s as the world’s biggest box office, all but ensuring that Hollywood studios will continue to do everything possible for access to the country. This also means China will assert itself more aggressively to control Hollywood. The country, which already places a quota on the number of foreign films that can be screened every year, banned them for nearly two months this summer because of celebrations for the 100th anniversary of the Communist Party’s founding.

Meanwhile, China’s film industry now churns out its own big-budget franchises, lessening the country’s dependence on the next Fast & Furious installment. Though some American filmmakers, such as Quentin Tarantino and Judd Apatow, have pushed back on China’s demands, they are the rare exceptions willing and able to weather any potential repercussions. Instead, the film industry has regularly shaped its productions to please Beijing; whenever Hollywood fails, it either issues self-flagellatory public apologies or remains silent on the matter altogether. (Universal, Disney, and the other major Hollywood studios I reached out to for this story all declined to comment or did not respond to my requests.)

With studios now implementing their own limits on free speech, America’s supposedly gutsy, creative entertainment industry is at rapid risk of making preemptive self-censorship the standard. During the blacklist era of the 1940s and ’50s, Hollywood studios infamously submitted to domestic political pressure. Today, film censorship—the rise of which you can literally watch on screen—has become one of the most visible examples of American businesses bending their values to satisfy China, and a worrying harbinger for any industry that wants access to the country’s consumers. China has simply become too lucrative for Hollywood to resist.

What critics might call censorship, Hollywood studios might label a market-entry strategy. The phenomenon has long been part of the global film industry. Post–World War II West German audiences saw a different version of Casablanca than the rest of the world. Last Tango in Paris, with its notoriously explicit sex scenes, was edited before it could be released in Britain and barred from being shown in the Canadian province of Nova Scotia. Three Nordic countries placed an age restriction on the film E.T. in 1982 after child psychologists accused the film of portraying adults as “enemies of children.”

Thus, when China re-allowed Hollywood movies in the late 1980s and ’90s (they were banned during the Cultural Revolution) as long as it could select and edit the ones it wanted, American companies didn’t see red flags. “It’s all a version of self-regulation we’ve been going through for decades,” says Russell Schwartz, a former president of marketing at New Line Cinema and at Relativity Media, who oversaw campaigns for the Lord of the Rings trilogy and the Rush Hour sequels.

When China began seriously investing in—not just importing, but co-producing or financing—Hollywood films in the 2000s, the country represented pure opportunity. “Everybody was doing backflips” to get their films screened, Schwartz told me. The Chinese government, which oversees the country’s entertainment industry, imposes a quota on international movies—34 a year, occasionally a couple extra—and determines release dates, how much advertising a film receives, and the number of theaters in which it can screen. Foreign studios, Schwartz told me, lobby fiercely for their titles to be allowed entry.

Hollywood’s admittance into China might have appeared to be an opportunity for America to promote Western ideals in an authoritarian country. However, according to Wendy Su, an associate professor of media and cultural studies at UC Riverside and the author of China’s Encounter With Global Hollywood, Hollywood only ever had one, all-encompassing objective: “the vast Chinese market and the potential for greater profits,” she wrote over email. The country had been “extraordinarily underscreened” only two decades ago, Schwartz noted, but built theaters so quickly that it now boasts more than 75,500 screens, according to a report released in February (the U.S. had roughly 41,000 as of 2020). Films that underperform in the States can thus recuperate their losses abroad.

Today, China’s box office doesn’t just represent opportunity for Hollywood; it can mean the difference between a studio’s success and failure. This has resulted in “anticipatory self-censorship” by the American film industry, says James Tager, the research director at PEN America, a nonprofit that promotes free expression, and the lead author of the organization’s exhaustive 2020 censorship report. Besides casting mainland-Chinese actors and shooting on location in China, the study says, studios even have regulators visit their sets—as was reportedly the case for Iron Man 3. (Marvel and Disney did not respond to a request for comment.)

The Chinese government encourages this chilling effect by setting confusing, ever-shifting expectations, Tager told me. Time-travel narratives like Back to the Future were deemed “frivolous” and disrespectful of history—especially if such stories suggested the ability to alter reality. But 2012’s Looper, featuring scenes shot in Shanghai, with dialogue depicting China as a representation of the future, made it past censors. A culture of trying to predict the country’s needs is now the norm: Stories portraying Chinese characters as antagonists or featuring disagreement with Beijing in regions such as Tibet, Taiwan, and Xinjiang have been assumed off-limits. But China has also banned scenes from Bohemian Rhapsody, apparently for depicting same-sex relationships, and prohibited Pirates of the Caribbean: Dead Man’s Chest altogether for including ghosts and cannibalism.

Still, obvious pandering to Beijing can backfire in China. Audiences call a Chinese actor who appears in a Hollywood movie but plays a minimal role a hua ping, or a “flower vase”: nothing more than a recognizable face lazily included to help sell tickets. As the country’s own filmmaking industry has grown stronger, Chinese moviegoers have become more discerning about which foreign films to watch, and Hollywood’s share of the Chinese box office has lessened. Though action-thrillers such as Ready Player One fill seats in China, comedies still struggle to connect. “Many prospective clients have misinformed notions that China can be a savior market if you can only gain access,” Rance Pow, the CEO of Artisan Gateway, a consulting firm focused on Asia’s film industry, told me over email. “In fact … China can be a challenging, sometimes unforgiving environment for foreign fare.”

If China’s apparent crackdown on Chloé Zhao’s work is a cautionary tale, then the case of John Cena is a tragicomic one. The WWE star turned actor appeared in this summer’s ​F9, the latest Fast & Furious blockbuster, and Universal Pictures jumped through all the right hoops to ensure its success. The film, co-produced with the state-owned China Film Group Corporation, premiered in China as well as several other places more than a month ahead of its stateside release—the longest lag ever for a Hollywood movie and a date seemingly chosen to accommodate the CCP’s centenary plans.

Shortly after the film came out, Cena, who stars as the beefy villain in F9, posted a puzzling video to the Chinese social-media platform Weibo in which he awkwardly apologizes over and over in stilted Mandarin for “my mistake.” While Cena doesn’t name his offense, he had called Taiwan a country—a characterization the Chinese government adamantly opposes—during a press interview not long before the video. Cena’s apology made him a darling to Chinese nationalists and a punching bag for U.S. media. But the contrition paid off: F9 grossed $136 million in China its first weekend, nearly double its North American opening. Universal never confirmed what precipitated Cena’s video, and Cena hasn’t revisited the subject since. The only point of it, apparently, was to appease Beijing and move on.

Supplication, then silence: That’s consistent with Hollywood’s larger publicity strategy when the hint of a China-related scandal arises. “The reason why no one wants to talk about this is because there’s no advantages to talking about this,” Tager told me. “They want this issue to go away.”

According to analysts, studios are in a lose-lose position. Aynne Kokas, an associate professor of media studies at the University of Virginia and the author of Hollywood Made in China, explains that if Hollywood were to acknowledge self-censorship, the media blowback in the West would be significant, and China’s risk-averse government might blacklist Hollywood films to minimize attention. At the same time, she told me, studios might draw scrutiny from certain American legislators, harming their reputation at home. But Hollywood won’t stop caving to demands from Beijing, because that’s simply where the industry’s growth is. No other market, especially during the pandemic, comes close. “So in some ways it’s a problem with the American model,” Kokas said. “Can you make a product that is profitable without being in the Chinese market?”

The answer, it seems, is no. So much of Hollywood’s business today resides on shaky ground. The pandemic’s effects, the streaming wars, the consolidation of studios, the expansion of franchises into theme-park attractions—they’re all unpredictable variables. Yet even as China’s investment in Hollywood has slowed amid a trade war with the U.S., Chinese moviegoers provide a rare constant for studios: a market for guaranteed profit, as long as Beijing approves. Tager suggested to me that perhaps Hollywood studios could band together to rewrite the rules, but few experts offered measures that would fundamentally change an asymmetrical relationship between the world’s largest producer of films and its most lucrative audience. In the end, Schwartz observed, “I don’t think we’ll ever really draw a line in the sand.”