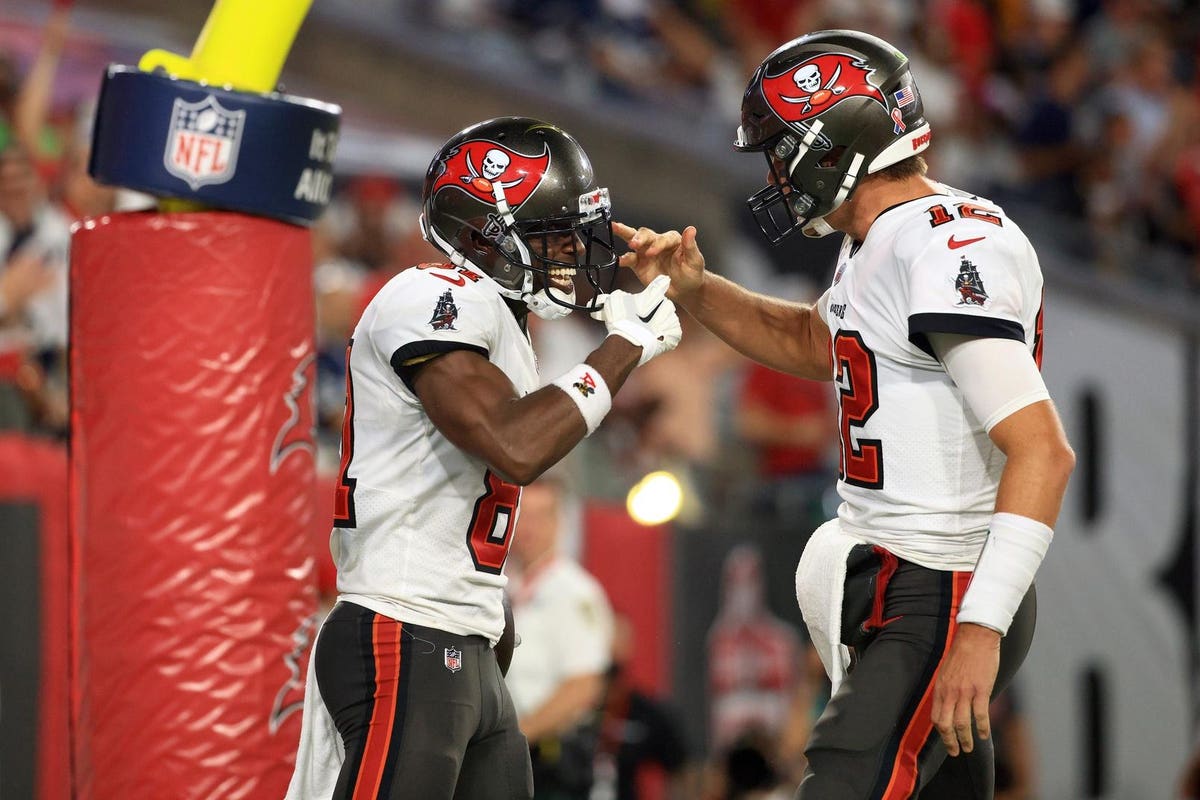 The NFL kicked off the 2021 season with a thrilling game and huge TV ratings as fans were back in the stands in Tampa Bay to see the defending Super Bowl champion Buccaneers pull out a last-second win over Dallas, 31-29. The game averaged 26 million viewers – the most since 2015 opening night. And the betting action and handle was heavy as well. Buccaneers bets poured in as kickoff approached, but didn’t work out for Bucs point spread bettors. Tampa Bay closed as a 9-point favorite at many online sportsbooks and even reached -9.5 at FanDuel Sportsbook.

The Week 1 lines have been out for months, and a look at the current Week 1 odds shows some key line moves as more bets pour in ahead of Sunday kickoff. FanDuel is reporting the most spread support on the following teams:

The betting data changes throughout each day with most bets taken closer to kickoff. The money, or handle, is different that the number of bets. You can follow the NFL odds and updated betting data at oddsfire, which includes lines, totals and moneyline on the numberFire next generation sports analytics platform by FanDuel.

I update other big bets and major wagers from leading online sportsbooks, including a $500,000 halftime bet that won on the Dallas Cowboys (+2.5) Thursday night.

Betting favorites will take most the spread bets each week, and especially in Week 1 with bettors favoring last year’s stronger teams and betting against last year’s weak teams. The Buccaneers were a popular favorite that failed to cover the point spread opening night, and other favorites attracting at least 65% of the spread money on FanDuel Sportsbook include:

I pulled stats, analysis and picks from some sharp handicappers, analysts and bettors. These are just some of their NFL Week 1 selections and bets with only underdogs noted.

Carson Wentz will start at quarterback and make his Colts debut six weeks after foot surgery. “The Colts have plenty of offensive weapons, and the defense is solid across the board,” White notes. He adds “The Colts were a 3-point favorite and the line quickly bounced to Seattle being the favorite. Well, Wentz is back but there hasn’t been any adjustment.”

Fezzik and White both noted the teaser opportunity on Washington as an underdog this week, but the line has flipped and the WFT is now a slight home favorite against the LA Chargers.

“New Chargers head coach Brandon Staley opted to not play his starters in preseason, leaving us with questions about the team’s continuity,” White states. “Herbert was Rookie of the Year and excellent last season, and now he will be on the road and face one of the top three defenses in the NFL.”

The Jaguars went 1-15 last season, and are laying 3-points on the road with rookie QB Trevor Lawrence making his NFL debut along with head coach Urban Meyer. Houston has the worst roster in the NFL and is expected to be downright awful this season. But Divisional home underdogs are 15-6-1 straight up and 18-4 ATS in Week 1 since 2009, according to the Vegas Stats & Information Network (VSiN). New Texans QB Tyrod Taylor will start for Houston, who also has a new head coach in David Culley.

His Tennessee vs Arizona analysis points out that “The Titans won the AFC South last year, but they will likely take a noticeable step back offensively despite the addition of Julio Jones.” Tennessee didn’t do anything of note to address their defensive issues in the offseason, according to Dr. Bob, who adds that the Cardinals defense ranks near league average to start the season. “The Cardinals blitzed on 43% of their opponent’s passing plays last season, and the pass rush should improve with the return off a healthy Chandler Jones, who was All-Pro in 2019.”

The Cardinals did not play a road game in the preseason, and will now see hostile fans for the first time in two years. That’s part of the situations surrounding weekly evaluations, but Dr. Bob’s math model favors the Titans by just 0.6 points, offering some support on the Cardinals.

Last season, the Jaguars pulled off a big Week 1 upset over the Colts for their only win of the season. The Jaguars also fit the divisional home underdog angle and situation noted above by VSiN in Week 1. The Cowboys nearly did the same on the road to kickoff the 2021 season Thursday night.

There will be more upsets and surprises Sunday as fans return to stadiums, along with a most anticipated regular season debut in front of fans in Las Vegas Monday night as the Raiders try to roll over the Ravens.