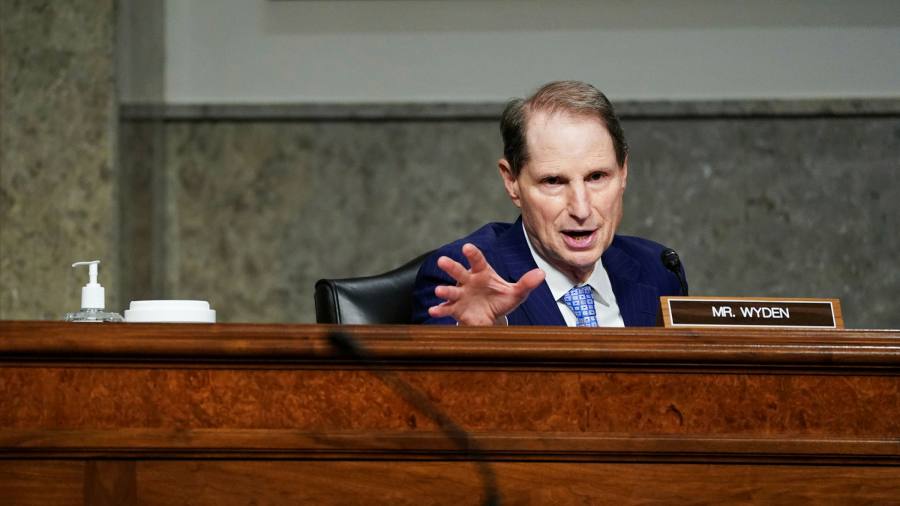 Sign up to myFT Daily Digest to be the first to know about US tax news.

Top Senate Democrats have proposed a 2 per cent tax on share buybacks by the largest US companies, firing a new shot across the bow of Wall Street and corporate America.

The legislation expands the roster of tax increases on large businesses and wealthy Americans being considered in Congress as Democrats and the White House look for ways to fund President Joe Biden’s $3.5tn social safety net spending plan.

“Even as millions of families struggled through the pandemic, corporate stock buybacks are once again nearing all-time highs. Stock buybacks are currently heavily favoured by the tax code, despite their skewed benefits for the very top and potential for insider game-playing,” said Wyden, a senator from Oregon. “Our bill simply ends this preferential treatment and encourages mega-corporations to invest in their workers.”

According to the text of the bill, publicly held companies would pay the 2 per cent excise tax on the value of their repurchased shares during the taxable year. US subsidiaries of foreign companies would also have to pay the excise tax.

The plan comes as congressional Democrats and the White House are feverishly escalating their efforts to pass Biden’s $3.5tn plan, which would plough government investments into child care, healthcare, education and the fight against the climate crisis over the next decade.

One of the biggest sticking points in the talks is how to pay for the plan. Democrats and the White House are considering increases in the corporate income tax rate, the capital gains tax rate and the top income tax rate for the wealthiest individuals.

But some Democrats are baulking at those proposals, or details of them, leading senior lawmakers to consider alternatives. The White House did not immediately respond to a request for comment on the buyback tax plan. One congressional aide said it had been shared with Biden administration officials.

Democrats have aimed to curb share buybacks for years. They criticised tax cuts enacted by Republican presidents George W Bush and Donald Trump for fuelling a rush of share buybacks rather than higher pay for workers or new investments. Wyden and Brown are allowing an exemption from the tax for buybacks intended to fund employee pension schemes.

As well as pushing for a new buyback tax, Democrats on Capitol Hill are also exploring ways to crack down on the preferential tax treatment of partnerships. On Thursday, the Senate finance committee released a discussion draft with proposals to “close certain tax loopholes that allow investors and corporations to pick and choose when to pay tax” by structuring their businesses as partnerships.

“The increase in the use of partnerships and other pass-through entities has severely depleted corporate revenues and has resulted in a more regressive tax system,” the document said. Its objective was to “make compliance easier for well-meaning taxpayers, allow the IRS to more successfully audit aggressive taxpayers, and raise revenue in a progressive manner”.

However, the plan could trigger a backlash from investors and businesses in a number of sectors that make widespread use of partnerships, from financial services to property and energy.

The US chamber of commerce said: “Shareholders often reinvest gains from buybacks into growing new businesses and creating jobs, which means that proposals to restrict or discourage buybacks would ultimately be detrimental to the US economy and American families at a time of economic uncertainty.”

Rana Foroohar and Edward Luce discuss the biggest themes at the intersection of money and power in US politics every Monday and Friday. Sign up for the newsletter here