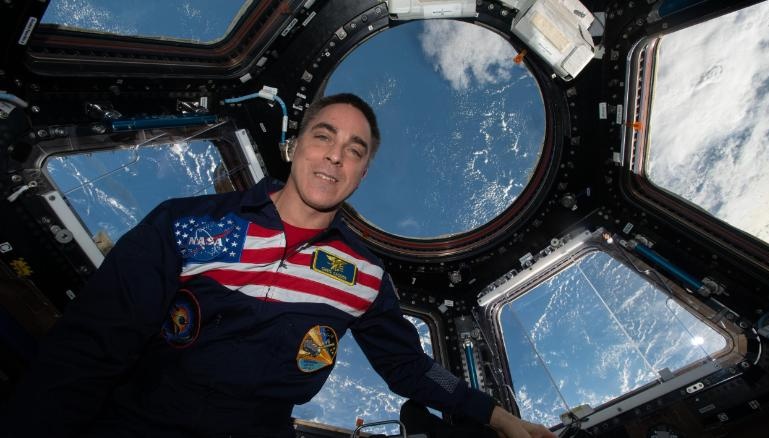 At age 6, Chad Keller already knew he wanted to be an astronaut, but his vision wasn’t sharp enough to pass the military requirements to become a fighter pilot.

Instead, never losing sight of his dream, Keller pursued a degree in aerospace engineering, hoping to someday make it into space.

On September 11, 2001 the 29-year-old U.S. Department of Defense and National Reconnaissance Office satellite propulsion specialist was on his way home to California after attending a series of launch meetings at the Pentagon.

At 9:37 a.m., the plane he was on—American Airlines Flight 77—crashed into the Pentagon.

Keller’s life ended that day, but thanks to the efforts of NASA astronaut Chris Cassidy, close to 20 years on, his space mission dreams were finally made a reality.

A former Navy SEAL platoon commander, Cassidy spent two tours in the Middle East in the aftermath of 9/11. He began training to become an astronaut in 2004 at the end of his second deployment.

Cassidy’s NASA career highlights include crewing aboard the Endeavor shuttle in 2009, two tours on the International Space station, and 10 spacewalks.

According to Cassidy, NASA allows astronauts to bring a selection of small personal keepsakes—such as photos, patches, or pins—along with them on their missions. For his first two space outings, Cassidy concentrated on mementos from his family but for his final mission in 2020, he wanted to share the unique and meaningful opportunity with someone who’d truly appreciate it.

Cassidy reached out to Keller’s father, Richard, with a proposition: He was heading into space soon and wondered if Chad would like to tag along. Richard’s answer was a resounding, “Yes!”

On April 2020, when Cassidy and the rest of his crew lifted off, pins from Chad’s days at Boeing and the University of Colorado, a program from his memorial service, a snapshot of Chad and his wife Lisa, and some of his ashes went with him.

To round out the collection, Cassidy also brought commemorative items from the 9/11 Museum.

Over the course of the mission, with a stunning backdrop of the Earth behind them, Cassidy photographed each item from his inventory in the space station’s observatory cupola.

Along with documenting moments in history, he also sent out messages of hope to the people on the planet below.

MORE: She Came to the US to Study With Only $300 in Her Pocket — Now She’s a NASA Director For the Mars Rover

“With each item that I pull out, I always pause for a second to think a little bit about the story to that particular item,” Cassidy told CNN. “It’s kind of special to think about the story and the path, the journey of that object from the hands that it was in to my hands to this window.”

In the 20 years since Chad Keller’s passing, his family had a mission of their own—to scatter his ashes at the places that held the greatest meaning to him. Thanks to Cassidy, they were finally able to send them to the one place he’d always most wanted to go—space.

While Cassidy and the Kellers have yet to meet in person, the bond they forged in bringing Chad’s dream to life is a testament to the resilience of the human spirit in the face of tragedy; one told from a perspective that’s both humbling and hopeful.

RELATED: She Survived Cancer at 10, Now She Will Be the Youngest Person to Be Launched Into Space

“The world would be a better place if every human being got five minutes to look out that window of the space station,” Cassidy told CNN. “It made me more appreciative for everything that Earth offers to us. Friendships, connections, and shared experiences are all that much more meaningful to me now.”

And that is a take-away that’s universal.

“The Cosmos is all that is or ever was or ever will be,” Carl Sagan wrote. If we can simply remember that we’re part of something larger than ourselves, then whether we’re earthbound or breaking the bonds of gravity, in the here and now or part of what’s come before, all of us are sailing among the stars.