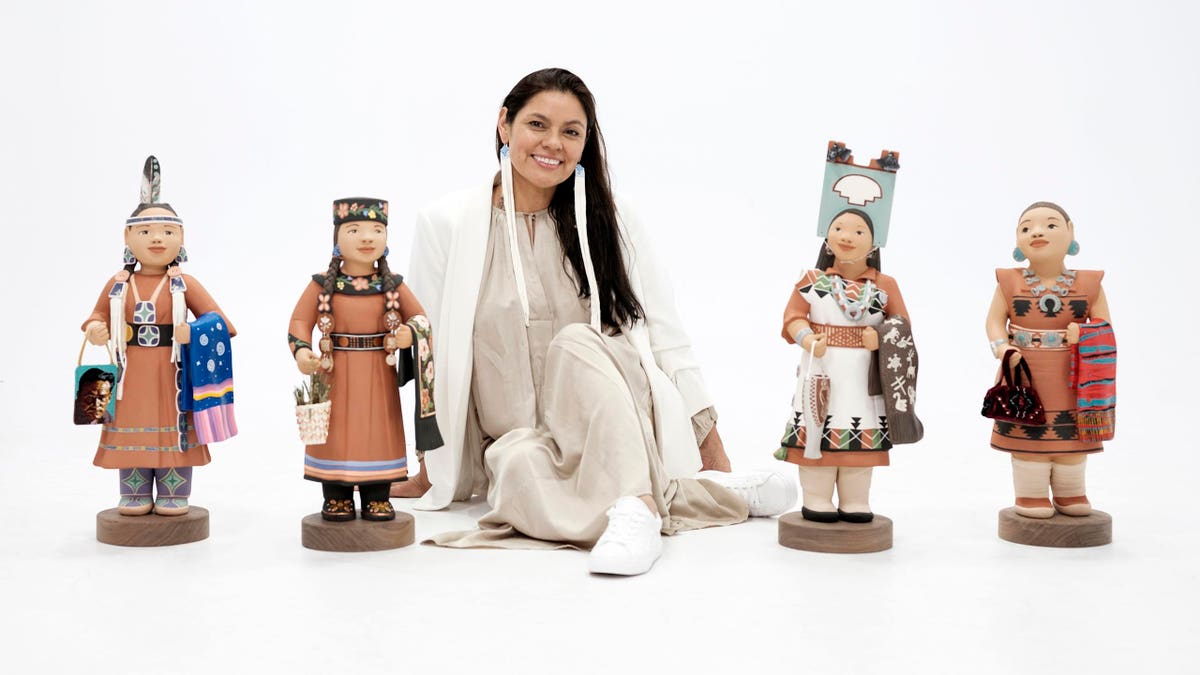 When considering the country’s indigenous people, American popular culture loves smushing the hundreds of distinct tribes and nations which occupied the continent prior to European contact together. America wants a monolithic “Indian.” A “cowboys and Indians” Indian. A Western Indian. A Plains Indian shooting arrows at buffalo, wearing turquoise.

Art history has done this prominently.

Art history–and art collectors–also love the “savage” Indian. The warring Indian. An unhealthy percentage of the depictions of Native Americans in art, even contemporary art, are violent depictions. What stereotypes does this imagery reinforce? How are onlookers encouraged to think about Native people through this barrage of hostility?

Kathleen Wall (Jemez Pueblo) recently created four ceramic figures offering a more sensitive portrayal of Native Americans, objects which will now enter the collection of the Detroit Institute of Arts following the museum’s purchase of the group during a virtual auction held this past August by the Institute of American Indian Arts with proceeds benefitting the school’s scholarship fund.

“This artwork will be essential in helping to teach visitors about different Native American cultures,” Denene De Quintal, Curator of Native American Art at the Detroit Institute of Arts, told Forbes.com of the acquisition.

No monoliths here. The welcoming, peaceful, joyful figures represented in Create Our Future—Honor Our Past represent the Navajo, Plains, Woodland and Pueblo people. The figures are all females. Each features cultural details specific to the individual nations.

“Create our Future—Honor Our Past not only allows the Detroit Institute of Arts to acquire an artwork by renowned ceramic artist Kathleen Wall, but also highly detailed artworks by eight other contemporary Native American artists,” De Quintal said. “Since the DIA is located in the Great Lakes, we were especially attracted to the Anishinaabe figure, Sweetgrass, which highlights Wall’s connection to her grandmother, who was both White Earth Chippewa and Seneca. Sweetgrass features Anishinaabe artists Wanesia Spry Misquadace (Ojibwe), and Kelly Church (Potawatomi/Odawa/Ojibwe). The DIA has Church’s ​Anishnabe Treaty Hat–Michigan Treaties (2017) in its collection.”

The Detroit Institute of Arts has long possessed a forward-thinking collector’s eye. It acquired the first Van Gogh painting to enter a U.S. museum (Self-Portrait, 1887) and commissioned Diego Rivera’s jaw-dropping Detroit Industry murals (1932–33). It was the first art museum to establish a curatorial department and galleries dedicated to African American art and has been making increasing efforts to add to its Indigenous art holdings.

“The DIA has a great collection of Native American artworks from the regions Create Our Future—Honor Our Past represents,” De Quintal said. “These figures add to our ceramics from the Southwest, as a well support the DIA’s initiative to acquire more contemporary Native American art.”

This marks the first purchase by DIA from the Institute of American Indian Arts which is the only college in the nation dedicated to the study of contemporary Native arts.

The Detroit Institute of Arts sits on the historic homelands of the Meškwahki·aša·hina (Fox), Peoria, Anishinabewaki ᐊᓂᔑᓈᐯᐗᑭ, Bodéwadmiakiwen (Potawatomi), Myaamia and Mississauga nations.