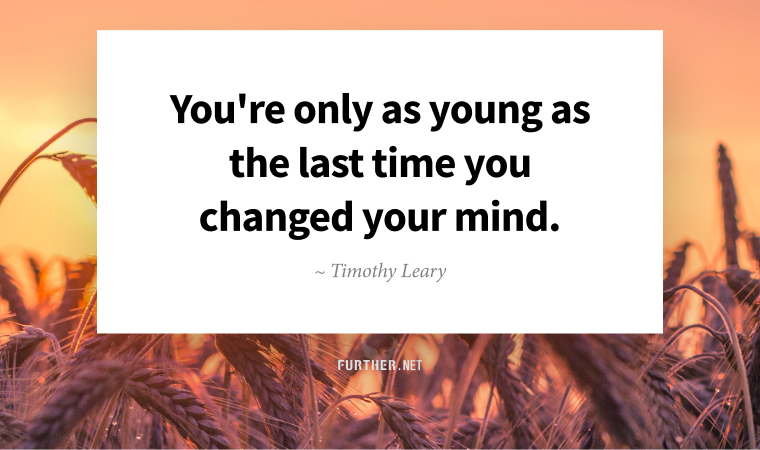 Those who are interested in personal growth are seeking transformation. Whether in the realm of health, wealth, or wisdom, we’re seeking to change in a meaningful way.

Some turn to self-help books. Others to meditation. Simply making it to the age of 50 can be transformative.

Other transformative events are more traumatic: A near-death experience, job loss, or divorce.

But there’s another path to transformative experience. In fact, 67% of participants in a 2006 landmark study at Johns Hopkins University rated this experience to be one of the most meaningful of their lives.

In the last 10 years, psychedelic drugs like LSD, magic mushrooms, DMT, a host of “plant medicines” — including ayahuasca, iboga, salvia, peyote — and related compounds like MDMA and ketamine have begun to lose much of their 1960s-driven stigma. Promising clinical trials suggest that psychedelics may prove game-changing treatments for depression, PTSD and addiction. The response from the psychiatric community, far from dismissive or even skeptical, has been largely open-armed.

The value of psychedelic therapy was first recognized nearly 70 years ago. In the 1950s, around 6,000 studies on psychedelics involving over 40,000 patients attempted experimental treatments for alcoholism, depression, schizophrenia, criminal recidivism, and more.

Then around 1965, things changed. What had been a promising field of research ran headlong into a nationwide political panic about LSD in particular. This led to psychedelics being classified as Schedule-1 drugs in the U.S. and Class-A in the U.K. as part of the broader and ill-fated war on drugs.

When we were young, this criminalization of psychedelics informed our worldview. Either psychedelics were evil things that led to bad trips and even insanity, or they were the party favors of rave and club culture.

Now, things are changing. Psilocybin mushrooms have been decriminalised in a couple of E.U. countries and several U.S. cities. A vote to federally sponsor psychedelic research recently made its way to the U.S. Congress, and in 2017 the U.S. Food and Drug Administration designated MDMA as a “breakthrough therapy.”

The hope among advocates is that therapeutic use of psychedelics will become not only legal, but mainstream. In anticipation of this shift, psychedelic drug developers and clinical providers are attracting significant investment.

Unlike other drugs, psychedelics can radically alter the way people see the world. They also bring mystical and hallucinatory experiences that are at the edge of current scientific understanding.

At that point, the remaining objection may be that a “hallucinatory experience” isn’t real. And if it’s not real, any meaning derived from the experience is an illusion.

First of all, meaning is what you make of it. Secondly, we don’t experience objective reality as it is. In fact, we’re likely wired so that the true nature of reality is hidden from us as a survival mechanism.

Donald Hoffman, a cognitive scientist at the University of California, Irvine, argues that consciousness creates neural activity, not the other way around. In other words, humans have evolved to perceive what’s needed for survival (and no more) under “normal” circumstances.

Perceptions, he says, are a user interface, but not necessarily reality.

In that sense, the brain doesn’t create the mind. The brain constrains the totality of the mind for our own good. From an evolutionary standpoint, it wasn’t adaptive to be perpetually “one with everything” when lions and tigers and bears were about.

In a controlled clinical setting, though, a psychedelic experience that “unlocks” your mind may be just the transformation you’re looking for. Changing your mind is the necessary first step to changing your life.

P.S. Did someone forward this issue of Further to you? Join us here.

After a year-and-a-half of loss, sickness and stress caused by the pandemic, burnout is high and morale is low. But in some positive news, the way to feel better need not depend on restrictive diets, grueling fitness regimes or testing mental challenges, but in something far more attractive: fun.

Ready for the Roaring 20s? It’s Time to Re-learn How to Have Fun, Says Happiness Professor (The Guardian)

You and I are Gonna Live Forever

The sentiment may have come from Oasis in Manchester, but the “live forever” movement is deeply rooted in California. Will we end up being Generation X-tended? With the kind of money being thrown at lengthening both lifespan and healthspan, it’s worth factoring into your future plans.

What matters is not so much the “what” of a job, but more the “who” and the “why”: Job satisfaction comes from people, values, and a sense of accomplishment.

The Secret to Happiness at Work (The Atlantic)

Familiar categories of mental functions such as perception, memory, and attention reflect our experience of ourselves, but they are misleading about how the brain works. More revealing approaches are emerging.

How to Put Insomnia to Bed

We often talk about the importance of sleep here at Further. It’s essential for a healthy immune system and cognitive function. It helps safeguard your system from chronic illnesses (i.e., heart disease, Type 2 diabetes, depression). And for those of us over 50, better sleep duration decreases the risk of dementia.

In other words, consistent sleep is critical for both lifespan and healthspan.

Catching z’s isn’t necessarily an issue for those who experience occasional sleep disturbances. But for around one-third of all adults, insomnia means it’s impossible to ever rest assured.

If you want to beat chronic insomnolence, it helps to understand what causes it in the first place.

Topping the list are stress and anxiety. Thanks to today’s pandemic-related pressure cooker, the American Academy of Sleep Medicine reports around 60% of adults are experiencing “coronasomnia.” There are other contributing factors, too, like disrupted circadian cycles (later or inconsistent bed/wake times), too much time inside, and increased alcohol and “comfort” (read: crappy) food consumption.

Plus, there’s the dirty secret many of us keep: work from home has allowed us to treat our boudoir like a boardroom. Experts like sleep medicine physician Dr. Ilene M. Rosen warn against blurring the lines between work and sleep.

The bed is for sleeping or sex. If you’re not doing either of those things, then get out of bed.

Of course, not all sleep disturbances have psychological or behavioral causes. An underlying medical condition like restless leg syndrome or sleep apnea may be the culprit. If you suspect that’s what’s happening, consult a doctor. (Visit sleepeducation.org to find a local sleep practitioner or physician.)

Regardless of the source of your sleeplessness, there are numerous slumber-inducing strategies (beyond those of a chemical nature) you can try to break the cycle of insomnia.

An excellent way to start is to use cognitive-behavioral inspired techniques — that is, make choices that address underlying causes of restlessness, specifically anxious or negative thoughts. So, for example, use the 25-minute rule: if you can’t fall or stay asleep for 25 minutes, get up and do something relaxing, like read a book in low light, meditate, do a light breathing exercise, or listen to a soothing song or podcast.

Or, you can try the kinds of sleep-inducing things other people find helpful but experts may not embrace. For example, streaming a favorite TV show can calm you, even though device screens’ blue light generally disrupts sleep. Others resort to reading technical non-fiction (read: boring, which makes me wish I kept my college economics textbooks). Even a bland, carb-rich midnight snack might help.

Finally, as long as you’re up, here are some articles from the Further archives with plenty of doze-inducing advice:

With that, I bid you a good night!

The Pandemic Messed With Your Sleep. Here’s How to Feel Rested Again (New York Times)

But the moment that I first laid
Eyes on him all alone
On the edge of seventeen
Just like the white winged dove
Sings a song
Sounds like she’s singing
Ooh baby, ooh, said ooh …. (YouTube)

Thank you for sharing Further!