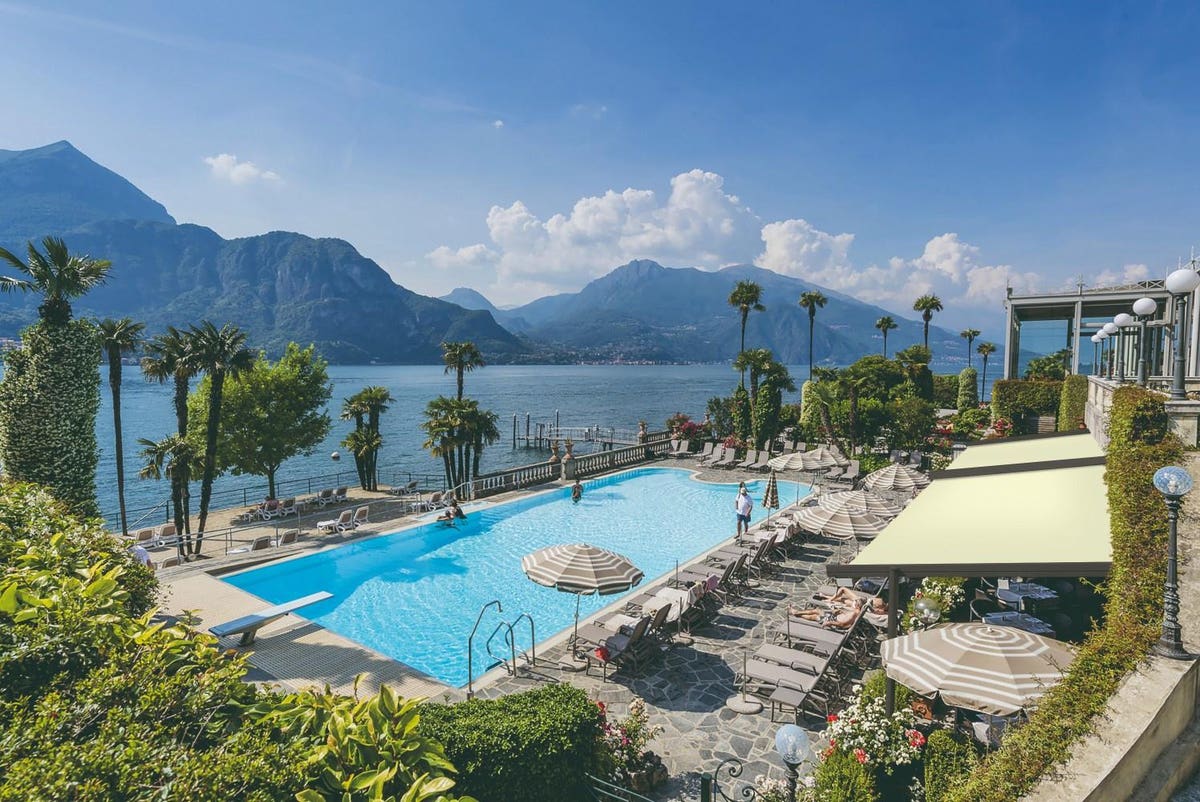 As August draws to a close, Lake Como in northern Italy is still busy with vacationers taking advantage of its temperate microclimate. The pretty medieval town of Bellagio is thronged with visitors promenading leisurely before the lake edge or sipping cocktails at street-side tables. At the end of the town, stretching along the waterline, is the resplendent facade of Grand Hotel Villa Serbelloni. Named the #1 resort in Italy in 2019 by Travel & Leisure, the five-star “de luxe” hotel is a swish but surprisingly easygoing base for exploring the area.

The terrace of Grand Hotel Villa Serbelloni looks directly out over the rippling lake waters and majestic mountains. Lake Como is synonymous with luxury and the sweeping shorelines are a succession of opulent villas and palatial hotels. Homeowners include George Clooney and Richard Branson, while the visiting A-listers this season included actress Sophia Bush, supermodels Joan Smalls and Irina Shayk, and singer Nicole Scherzinger. Villa Serbelloni’s 150-year history has had its fair share of VIPs. President JF Kennedy, the Rothschilds and Al Pacino have all graced the hotel’s rooms. But celebrity status is far from being a prerequisite for staying there. In fact, general manager Jan Bucher, whose family has owned the establishment for just over a century, tells me that photoshoots by the pool for a million-strong Instagram following aren’t exactly “on brand”.

Guests at Villa Serbelloni include everyone from elderly couples to families, many of whom are repeat visitors returning each year for some lakeside R & R. In fact, as Travel & Leisure’s award implies, Villa Serbelloni is more of a resort than a hotel. Many guests may never leave the neoclassical splendor of its 95 rooms, stately breakfast parlor, spa, gym, indoor and outdoor pools and private lake access.

After being supplied with cardamom-scented Bellini and a feast of aperitivo snacks — including oysters and tabasco sauce, red prawns on an avocado cream, and pigeon mousse tartlets — I’m joined on the panoramic terrace by Bucher. At just 31 years old, he is in charge of this vast and historic establishment after taking over from his father. He hardly seems overwhelmed by the responsibility, though, as he settles in his chair and recounts anecdotes from the hotel’s history. The Bucher family has been running the hotel since 1918 and its homely atmosphere may derive from the fact that the family actually lives in a wing of the building.

There is another member of the hotel’s team who, although he may not live in the structure, would also easily call it home. Chef Ettore Bocchia has been managing the hotel’s Michelin-starred Mistral restaurant for 30 years. Such longevity has allowed him to “source the best of the best” for the hotel. It shows in the tasting menu which includes red prawns from the chef’s exclusive fishing zone in Sicily, an ethical foie gras from Eduardo Sousa’s farm in Spain, and caviar from Poland. The menu also features a rich, powerfully flavored dish of peacock ravioli where all parts of the bird are used in the various elements from the pasta filling to the meat sauce to the gravy. As a pioneer of molecular cuisine, Bocchia also offers turbot cooked in sugar allowing the inside of the fish to remain soft and creamy with a texture almost as though raw.

During dinner, food and beverage manager Carlo Pierato recounts snippets of his own long experience at the hotel, serving and meeting its clients. He tells me of a recent guest, an elderly American who had visited the hotel when she was ten years old with her grandmother. “Although some things have changed, the mountains are the same and the hotel is like home,” were the woman’s words. Indeed, the businesses and the residents of Bellagio are unwavering in their determination to maintain the area’s timeless tranquility. Carlo explains that a vast, crumbling villa just outside the center received a proposal for renovation as a casino. The idea was flatly refused by the town.

Expanding my search for laid-back luxury beyond the hotel’s doors, I was directed to George Clooney’s local haunt, Da Luciano. The roadside and lakeside bar and delicatessen is charming but unassuming, with tables set out by the water beneath the shade of a tree. As the food arrives, I can see how Clooney might like to hide in a corner here, whiling away hours sipping local wine with a platter of cold meats and cheeses from the counter inside. The bar’s latest service is a private boat mooring and pontoon so clients can arrive directly from the water.

While visitors can’t have a curious peek at Clooney’s Villa Oleandra just down the road from Da Luciano, an idea of private lakeside living can be found at Villa Melzi, near Bellagio, and Villa Balbianello near Tremezzina. Although the gardens are open to the public, the neoclassical Villa Melzi is still privately owned. The Palladian-style house sits in an undulating landscape of little hills, a Japanese pond, classical-esque statues and a chapel. It inspired the likes of composer Franz Liszt and writer Stendhal, who both stayed at the property.

Villa del Balbianello, located on a wooded promontory just up the road from Da Luciano, is an 18th-century mansion with landscaped gardens. Envisaged as a hideaway for luxury literary retreats by its original owner, it hosted various prestigious politicians and writers including Alessandro Manzoni whose The Betrothed is considered one of the great masterpieces of world literature. More recently, the villa and terraced gardens have provided spectacular stage sets for various films including Casino Royale (2006) and Star Wars: Episode II Attack of the Clones (2002).

Back at Grand Hotel Villa Serbelloni, I wander around the gardens that overlook the water. From this direction, all you can see is lake and mountains. It’s hard to believe that the fast-paced metropolis of Milan lies just an hour south.