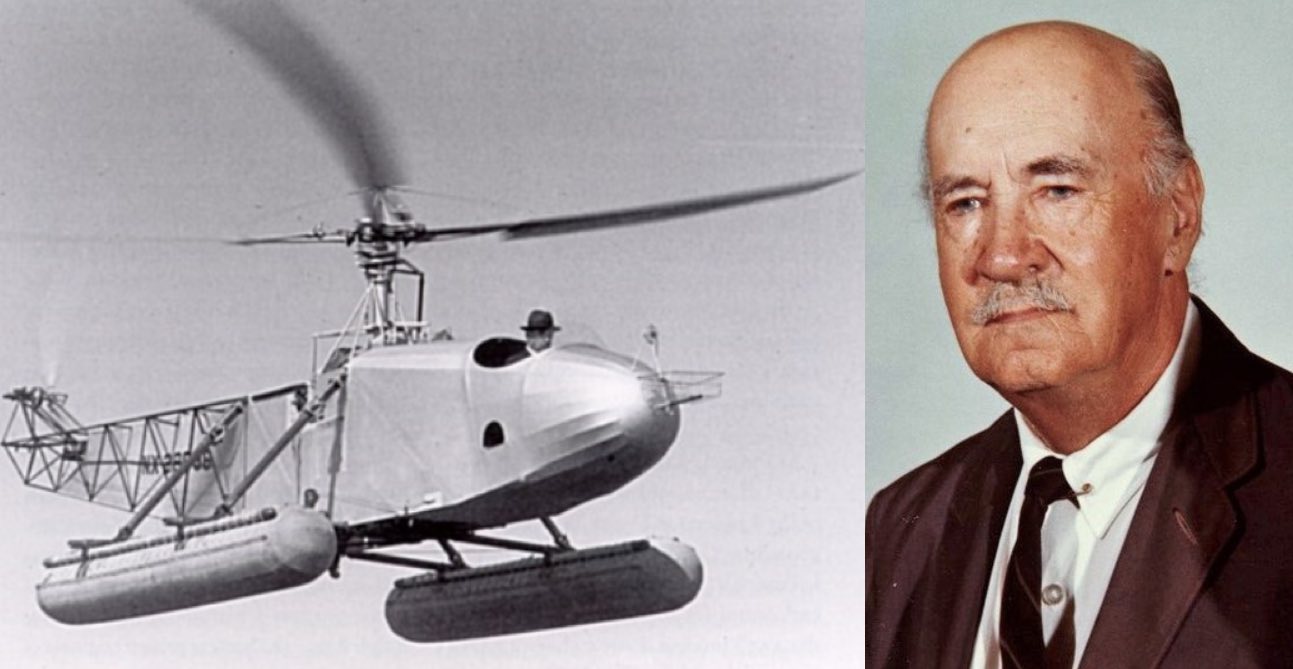 82 years ago today, Igor Sikorsky flew his self-designed Vought-Sikorsky VS-300, the first viable helicopter, which pioneered the rotor configuration used by most helicopters today.

In 1901, the Russian homeschooled boy began to experiment with model flying machines, and by age 12, he’d made a small rubber band-powered helicopter.

During the revolution, he emigrated to the U.S., launched an aircraft company, and was convinced that his years of study and research into rotary-wing flight problems would lead to a breakthrough.

The VS-300, with its single three-blade rotor originally powered by a 75 horsepower engine, was the first successful helicopter to use a single vertical-plane tail rotor configuration for anti-torque. With floats attached, it became the first practical amphibious helicopter. Soon, Igor Sikorsky modified the design into the R-4, which 3 years later became the world’s first mass-produced helicopter. (1939)

37 years ago today, retired Air Force Colonel and fighter pilot (who was shot down a decade earlier) Joseph Kittinger set off alone as the first man to cross the Atlantic in a gas-powered balloon, setting a world aerospace record.

Four days later, after having traveled 3,543 miles (5703km) through the middle layers of the stratosphere, he had become the first man to fully witness the curvature of the earth—on a mission that was seen by its designers as a stepping stone to space. He also previously set a world record for the highest skydive from a height greater than 19 miles. (1984)

And, on this date in 1955, after frustrating sessions in a recording studio, Little Richard and his producer went to a bar for lunch. Richard started playing the piano like crazy, singing a loud, racy version of ‘Tutti Frutti,’ a song he had written and composed for live club gigs years earlier.

With its opening cry of ‘A-wop-bop-a-loo-bop-a-lop-bam-boom,’ the producer knew it would be a hit. Richard completed the song in three takes and it became his first #1 hit. Some call this song “the record that changed the world” and “the birth of rock and roll”, with its loud vocal style emphasizing power, and its distinctive beat and rhythm, combining elements of boogie, gospel and blues. David Bowie credits Little Richard as his most important musical inspiration.

36 years ago today, The Golden Girls, starring Bea Arthur, Betty White, Rue McClanahan, and Estelle Getty, debuted on television. The popular sitcom created by Susan Harris aired on NBC for seven seasons—a total of 180 half-hour episodes. The show features four older women who share friendship and a home in Miami, and the wise-cracking women were an instant hit with audiences.

The Golden Girls received critical acclaim, too, winning the Primetime Emmy Award for Outstanding Comedy Series twice. It also won three Golden Globe Awards for Best Comedy TV show. Each of the four stars received an Emmy Award, making it one of only three sitcoms in history ever to achieve this. The series also ranked among the Nielsen ratings Top 10 for six of its seven seasons.

In 2014, the Writers Guild of America placed the sitcom at number 69 in their list of the “101 Best Written TV Series of All Time”. WATCH a great highlight reel of some of their funniest moments… (1985)