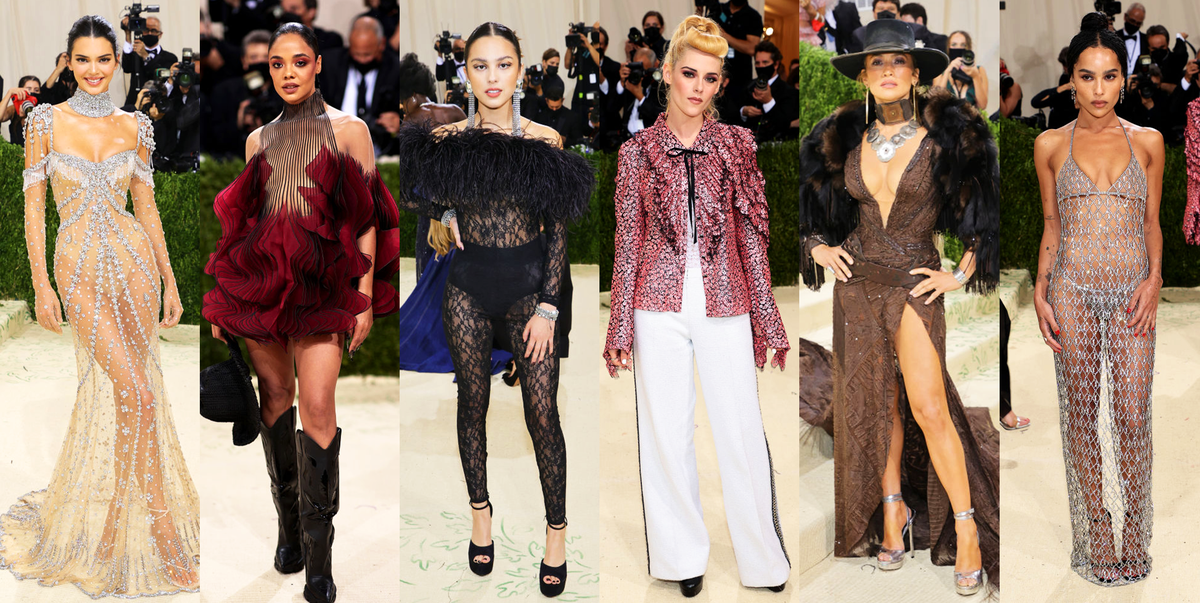 After literally years, the Met Gala is finally back, slightly later than anybody hoped for, but none the worse for wear. And on behalf of a world positively hungry for the kind of high-fashion cray the event provides, we thank the stars and designers for this bounty of style. We went into the night assuming it would be a low-key affair, what with the whole pandemic thing and all, but we are utterly thrilled to report that we were totally, one hundred percent wrong in our prediction. The stars turned it out—some more effectively than others. Let’s run through the most notable looks of the night, shall we?

The co-chair and Dune star came in his usual style, which is somewhere between futuristic boy-prince and video game character. Personally, we love this look, but as much as the Chucks are an American classic, we’re not convinced they make the best footwear choice for the suit, even with the sweatpants. We might have liked them more in black.

Well, she certainly won’t have to worry about hand sanitizer or mask-wearing all night. We’ll call this the ultimate in Covid Couture. It’s weird, but we respect it.

It has been far too long since Lupita Nyong’o has graced the world’s red carpet and to our utter delight, she came back to this one in gorgeously perfect style. The denim gown is about as American as style gets and the glorious swirl of hair takes the whole look somewhere new and interesting.

The Saturday Night Live star may not have been our prediction for one of the dress-wearing men of the night, but there’s something a little sinister about this look—like a cross between a priest and a surgeon—that makes it feel like the height of Horror Chic. It suits him really well.

The poet, activist and Met Gala co-chair took a more restrained approach to her red carpet style. This floaty, romantic Vera Wang gown was inspired by the Statue of Liberty and even included a purse with part of the lady’s famous quote, “Give us your tired.” Very apt for a woman of words and symbolism.

The Grown-ish star looked like a Disney Princess on her wedding day in a look paying homage to Josephine Baker and how could we possibly object to that?

The star of the upcoming Thor: Love and Thunder looked like a delicate flower in kickass boots. Somehow, that seems totally Tessa Thompson to us.

Taking the “horse girl” meme literally, the “Do Me Like That” singer made her claim for the wackiest look of the night by sporting a 3-D horse head as a bodice. She seemed to be having fun with it and the floral textile is actually very pretty, but as much as we love our crazy Met Gala fashion, we’re going to have to give this one (forgive us) a “neigh.”

The Pose star and Emmy nominee looked stunningly dramatic in a Victorian-inspired gown from Thom Brown that somehow managed the trick of looking fiercely sexy and up-to-the-second modern.

The Spencer star was one of the latest arrivals on the red carpet, but she was worth waiting for. In a Chanel ensemble that showcased her particular knack for combining leisure wear with couture and making it look effortless, she was almost unrecognizable in her curled blonde bangs and high pony.

The world’s most fabulous billionaire was the absolute last to arrive, showing up swaddled in a massive Balenciaga cloak, dripping diamonds, and topped off with a knit beanie. The ultimate in hi-lo style.

The “Brutal” singer stepped out in a black lace catsuit that seemed a little more appropriate for the VMAs, but still managed to deliver that high-fashion feeling the Met Gala asks for. Besides, if there was one major trend of the night, it was definitely see-through and tight-fitting. She told interviewers that her lacy look was a nod to American punk music.

The stylish stepdaughter of Vice-President Kamala Harris stepped onto the carpet in a Stella McCartney crystal and mesh bodysuit with matching pants and sneakers, somehow managing to look like a space princess, an Olympic athlete, and a superhero all at the same time.

The Euphoria star looked like luxury defined as she positively dripped pearls and sparkle on the red carpet, in a gown that made her seem like some sort of sea goddess or modern-day Aphrodite rising from the waves.

The “Thot Shit” singer went for a classic old Hollywood screen siren look. While we’d liked to have seen something with just a little more flamboyance to it on the Met Gala red carpet, there’s no denying she looked absolutely stunning.

The “Lost Cause” singer and Met Gala co-chair served up pure retro beauty queen realness. Everyone saw Marilyn Monroe, but to us, she looked like Miss Peaches and Cream 1954. Just a gorgeously grown up fantasy look—which she told interviewers was inspired by Holiday Barbie—perfectly executed.

The tennis star turned heads in a Louis Vuitton ensemble that paid homage to her own cultural heritages as well as saluting the idea of America as a melting pot. The look was wild and thoughtful at the same time, exactly what you want from a Met Gala attendee.

He just does not miss. Not even when he shows up as the Pope, changes into a golden knight, and finally strips down to a glittering gold bodysuit. Every look was flawless, every reveal was breathtaking. Behold your new red carpet king.

J Lo understood the damn assignment! When the American fashion theme was announced, your girl here called up Ralph Lauren and requested the most glamorous high-fashion cowgirl look he could possibly dream up.

The tennis legend wowed in a look that was part superhero, part drag queen, and spectacular all over. We just can’t look at this without smiling.

The “Angel Baby” singer worked a hard/soft look on the red carpet that seemed both defiantly sexy and deliberately uncategorizable, paying partial homage to the work of legendary queer photographer and fetish aficionado Robert Mapplethorpe while moving the look away from his masculinity obsessions. We loved it for being sexy, thoughtful, and queer to the rafters.

The thing about Iman is, if you invite her to the Met Gala, she’s going to give you the full Iman, whether you can handle it or not. Once again affirming her status as a world-class supermodel, the legend showed up looking like some sort of sun goddess in a Harris Reed ensemble that not only turned heads, it cleared the floor.

The “Sobrio” singer might have looked a little bit like a rhinestone cowboy or some city slicker cosplaying as a country boy in this bold take on a classic western style, but honestly, when he’s this gorgeous, does it even matter?

The “Mood Ring” singer sported a unique ensemble handcrafted by artisan brand Bode from, in the wearer’s words, “repurposed antiques.” We don’t know if we love it, and it definitely doesn’t fit the theme in any obvious way, but we respect it for being so different. Besides, wearing a crown is practically required at the Met Gala at this point.

Not sure if this was the most receptive crowd for her message, but you can’t fault the good Representative from the Bronx for being consistent. Her gown, which said “Tax the Rich” in huge, red graffiti-like letters on the back, was designed by Brother Vellies’ Aurora James, creator of the 15 Percent Pledge, which is calling on major retailers to devote 15% of their shelf space to Black-owned businesses. AOC walked that red carpet, but more importantly, she walked the walk.

What could we possibly add to this picture? The “Gett Off” singer and dancer showed up on the red carpet looking like a damn goddess and dropping every jaw in sight before announcing to anyone who’d listen that she couldn’t wait to get inside and eat. Respect for a real one—who just happens to look amazing with as little as possible on.

The iconic actress and host of The View did not come quietly, nor would we expect that of her. Taking up as much space as possible rendered in colors almost too vivid for the eye to handle, she was the very definition of “too much” and that’s exactly how it should be.

The model and reality star looked amazing in a sheer, beaded gown that resembled something Cher might have worn in the ‘80s. Our only quibble with the otherwise gorgeous look is that her bodysuit isn’t a particularly good match to her skin and it’s a little too obvious in pictures.

Because this is what we want from our Met Gala red carpet: pure cray with a strong message. While this outfit might seem ridiculous on the surface, it’s paying homage to the work of American queer artist and activist David Wojnarowicz and defiantly imagining a world of free queer expression. We absolutely love it.

Chloe and Halle Bailey in Rodarte

The singing sisters couldn’t have looked more different as Chloe served up pure diva-goddess while Halle went for more of a showgirl look, which she said was inspired by legendary singer Tina Turner.

The star of the upcoming The Batman (as Catwoman, no less) made wearing a bikini on the red carpet look like the chicest thing anyone could do.