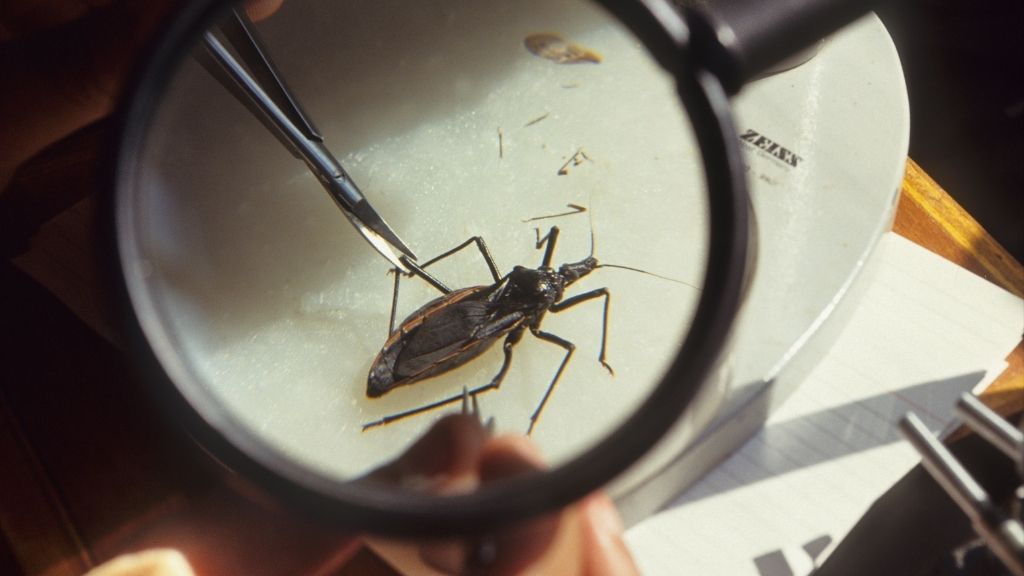 Chagas disease, also known as American trypanosomiasis, is caused by the protozoan parasite Trypanosoma cruzi, according to the U.S. Centers for Disease Control and Prevention (CDC). The illness is named after Brazilian physician and researcher Carlos Ribeiro Justiniano Chagas, who diagnosed the first known case of the malady in 1909, according to the World Health Organization (WHO).

An estimated 6 million to 7 million people worldwide are thought to be infected with T. cruzi, the WHO states, although the CDC website says there may be as many as 8 million. Chagas disease can be cured if treatment begins soon after infection, but if left untreated, the infection can become chronic and can sometimes lead to severe and life-threatening medical problems.

T. cruzi can be transmitted in several ways, but typically, people become exposed to the parasite through contact with the feces or urine of triatomine bugs (Triatominae), a family of blood-sucking insects that primarily inhabit Latin America and the southern U.S, the CDC states. That said, the bugs can be found throughout the Americas and have been documented in 29 U.S. states, in total, according to Texas A&M University.

Nicknamed “kissing bugs” because they often bite people’s faces, triatomine bugs hide during the day and emerge at night to feed on animal and human blood, according to the WHO. The bugs can pick up T. cruzi from the blood of infected people and animals, and once infected themselves, the bugs’ guts serve as an incubator for the parasite until it gets passed through their feces and urine.

After feasting on a person’s blood, triatomine bugs defecate, leaving poop and T. cruzi on their victim’s skin. If the biten person — likely asleep at the time of the bite — then rubs or scratches their skin, they can end up pushing the parasite into their mouth, eyes, bite wounds or other open skin lesions.

Humans can also become infected with T. cruzi in the following ways, according to the WHO:

“It is generally considered safe to breastfeed even if the mother has Chagas disease,” the CDC notes. “However, if the mother has cracked nipples or blood in the breast milk, she should pump and discard the milk until the nipples heal and the bleeding resolves.” The T. cruzi parasite cannot be transmitted from person-to-person like a cold or the flu or through casual contact with infected people or animals, the CDC adds.

Chagas disease has an acute phase, which lasts for weeks or months, and a chronic phase, which can persist for decades or through someone’s entire lifespan, the CDC states.

During the acute phase of Chagas disease, a large quantity of T. cruzi parasites circulate in the bloodstream, but symptoms tend to be “absent or mild.” An early sign of infection that crops up in many people is a skin lesion or a purplish swelling of the lids of one eye. A person might also experience persistent fevers, headaches, enlarged lymph glands, a pallid appearance, muscle pain, difficulty in breathing, abdominal or chest pain or swelling, according to the WHO.

Specifically, a person with an acute infection may develop swelling near where the kissing bug originally bite them, according to the CDC; this swelling is sometimes called a “chagoma,” while the telltale swelling of an eye infected with T. cruzi is called Romaña’s sign. In rare instances, young children can develop severe inflammation of the heart muscle or the brain and lining around the brain during the acute phase. People with compromised immune systems, due to AIDS infection or chemotherapy treatment, for example, face a heightened risk of such severe symptoms during an acute Chagas infection.

In the chronic phase of infection, the T. cruzi parasites can mostly be found in the heart and muscles of the digestive system and few or no parasites are in the blood, according to the WHO. At this stage, many people remain asymptomatic and never go on to develop complications from Chagas disease. But in an estimated 20% to 30% of people, the following symptoms can emerge, per the CDC:

Note that it may take more than 20 years from the time of the original infection to develop these heart or digestive problems.

Immunosuppression, due to illness or medications, can also allow T. cruzi to “reactivate” in the chronic phase, meaning the parasites appear in the bloodstream as they did in the earlier acute phase.

Chagas disease can typically be diagnosed with a physical examination by a doctor, blood tests and other biometric screenings. The CDC recommends that, if diagnosed with Chagas, a person should receive a heart tracing test (electrocardiogram) even if they feel fine.

In the acute phase, the antiparasitic drugs benznidazole and nifurtimox can cure Chagas disease; this also goes for children born with the infection. “The efficacy of both [drugs] diminishes, however, the longer a person has been infected and the adverse reactions are more frequent at older age,” the WHO notes.

Both drugs often have side effects, such as headaches, dizziness, loss of appetite and weight and skin rashes. The side effects may be more severe in elderly people.

These treatments are also recommended for those with a “reactivated” Chagas infection; for people early in the chronic phase; and for women of childbearing age, in order to prevent transmission in the womb. (Note that neither antiparasitic drug should be taken during pregnancy.)

For those already in the chronic phase of infection, treatment can help to prevent or curb progression of the disease, but the benefit of treatment should be weighed against the potential risks of taking the drugs for an extended period of time. Infected individuals may also receive different treatments to subdue the various symptoms of Chagas.

There is no vaccine available for Chagas disease, but there are steps you can take to reduce the risk of contracting T. cruzi. Triatomine bugs often hide in crevices in walls and roofs, so spraying down dwellings and surrounding areas with long-lasting insecticides can help eliminate the insects. Maintaining house cleanliness and good hygiene practices in food preparation can also cut the risk of exposure, as can using bednets, the WHO states.

This article is for informational purposes only, and is not meant to offer medical advice.