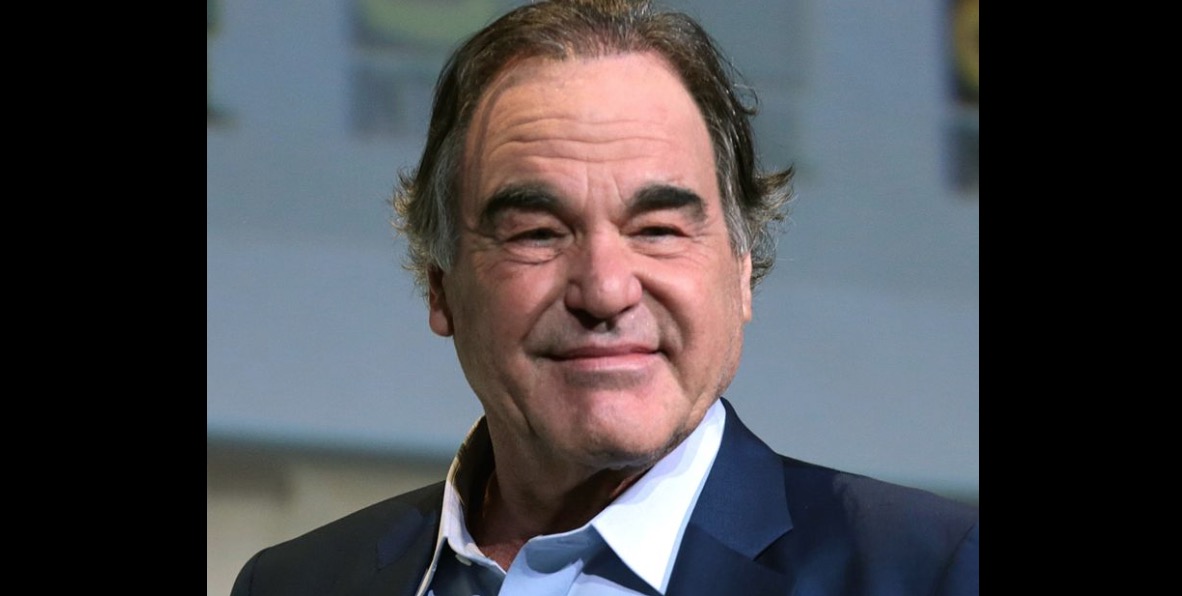 He won an Academy Award for Best Screenplay as writer of Midnight Express in 1978, and wrote the gangster film Scarface in 1983. He then achieved prominence as writer and director of the war drama Platoon, which won him Oscars for Best Director and Best Picture. It was the first of a film trilogy based on the Vietnam War, in which Stone served as an infantry soldier. He continued the series with Born on the Fourth of July—for which Stone won his second Best Director Oscar.

Stone’s other works include the financial drama Wall Street, the Jim Morrison biopic The Doors (1991), the satirical black comedy crime film Natural Born Killers, and a trilogy of films on American Presidents: JFK, Nixon, and W.

Many of Stone’s films focus on controversial political conspiracies and issues, including Snowden in 2016—and he spent two years interviewing Vladimir Putin for a 4-part Showtime documentary, The Putin Interviews.

Recently his memoir Chasing the Light was published about his being wounded in war and his filmmaking years, including the harrowing demon of cocaine addiction, the failure of his first feature, and his risky on-the-ground research of Miami drug cartels for Scarface. WATCH a recent interview… (1946)

Also, Happy 75th Birthday to Tommy Lee Jones. Born in Midland, Texas, he won an Academy Award for Best Supporting Actor for his performance as a U.S. Marshal in The Fugitive.

He is perhaps best loved for his role as “Agent K” in the Men In Black franchise. He attended Harvard University, and wrote his senior thesis on the role of Catholicism in the works of Flannery O’ Connor. (1946)

131 years ago today, Agatha Christie was born—and she was born to write mysteries! Best known for her 66 detective novels and 14 short story collections that earned her the nickname, ‘The Queen of Crime’, the British author and playwright went on to become the best selling novelist of all time. She wove such masterworks as Murder on the Orient Express, And Then There Were None, and The Mousetrap—the world’s longest-running play. WATCH a video about her life… (1890-1979)

And, 767 years ago today, the Venice merchant and writer Marco Polo was born. He became the first European to chronicle his travels through Asia—and his exotic details about life along the Silk Road inspired a new wave of explorers. His Book of the Marvels of the World, also known as The Travels of Marco Polo (c. 1300), gave Europeans their first comprehensive look at the mysterious culture and inner workings of the Eastern world, including the wealth and great size of China and its capital Peking. It also described cities in India, Japan and other Asian countries.

Marco journeyed for 24 years with his father and uncle, who had earlier travelled through Asia and met the emperor Kublai Khan. Upon his return back home, he became a wealthy merchant and raised a family. His detailed recollections influenced mapmakers before he died in 1324 and was buried in the church of San Lorenzo in Venice. WATCH a biography… (1254)