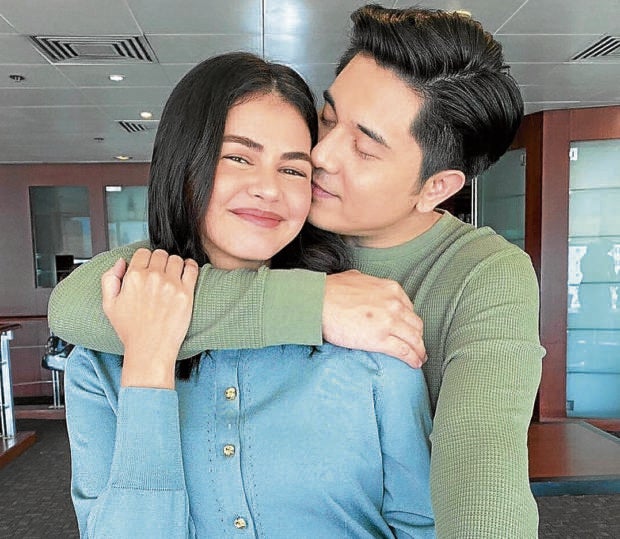 They say you’ll just know when the right time comes, but I’m always open to marriage,” said Paulo Avelino as a response to the question on whether he is the marrying type of guy.

“I know it’s really hard to say because sometimes you’re convinced that this woman is really the one for you but then something unexpected happens and you realize that it’s not really the case,” Paulo told reporters during a virtual media conference for his latest romantic comedy series “Marry Me, Marry You,” opposite Janine Gutierrez.

“Commitment is another matter. When you commit to something, you give a part of yourself to it. When you say you’re committed, you should be decided on sticking with that commitment no matter what happens. Finding the right person is also a tricky thing. You could be looking so far ahead that you don’t notice she’s just right beside you,” said Paulo as a way to tease Janine who was seated beside him during the press con.

In the series, Paulo and Janine play Andrei and Camille, two people with contrasting personalities who come from extremely different households. Camille is bubbly and hardworking. After the death of her own mother, she found her one big happy family in her three godmothers Elvie, Marvi, and Paula (Cherry Pie Picache, Vina Morales, and Sunshine Dizon). The three are trying to keep their promise to look after Camille’s well-being even if they encounter personal problems of their own.

Meanwhile, Andrei is a career-driven man who comes from a broken family. He is not close to his demanding father Emilio (Edu Manzano) and stepmom Laviña (Teresa Loyzaga). He often comes off as cold and arrogant and struggles to find happiness even while he has unresolved trust issues and fear of commitment.

The worlds of Andrei and Camille collide one night in a car accident. As they start falling in love, they both give each other brand new perspectives in life. But their relationship faces hardships when their loved ones start to meddle in order to keep them from discovering the truth about their families’ complicated history.

Janine, meanwhile, talked about what lessons she has learned from playing Camille. “What I realized is that when you commit to being with someone in marriage, you don’t just marry that person but also his family. As a woman, I appreciate it when a guy doesn’t just try to woo me but also works on being in my mom’s good graces. You should first get the approval of my mom before getting to me,” said the eldest daughter of veteran actress Lotlot de Leon. “It will be really challenging for any guy who is interested in Camille because she has three mothers.”

Paulo agreed with Janine, adding, “It would probably be a lot harder for you since you need to exert a little more effort, but people always appreciate a good gesture like showing respect to the people that your girlfriend cares for. You should also try to love the people she loves.”

Janine said that playing Camille also made her realize that “the relationship you form with people you chose to consider family can sometimes be stronger than with those who you are actually related to by blood. We can choose who to let into the family we create. I share this particular experience of Camille’s. There are people in my life, my mom’s close friends, who I consider family, too, because they helped her raise me and my siblings. So I think a lot of viewers will be able to relate to this situation. It’s a nontraditional family, in a sense, but its members show you genuine love.”

Speaking of family, Janine said she feels extremely happy to now be called a Kapamilya. After working with GMA 7 for many years, Janine signed a talent contract with ABS-CBN last January.

“I felt the love and care of the network and Dreamscape Entertainment (producer of the series) from the very start. They asked me what kind of project would I be interested in doing here—whether I like drama or something light. I appreciate that what I want matters to them. I feel so lucky to be doing this show with them, and with the rest of the cast and production team.”

She added that she also had no other person in mind to partner with for the series except for Paulo, whom she has already worked with previously in a movie project. “I already know Pau because of the work we did in 2019, so I’m excited to be with him again in this setting. I guess when we did the movie, talagang nakakakilig si Pau so I really expected to feel the kilig again here. I mean it was definitely an experience, so going into this, I said, if there’s anyone I wanted to start my journey here in ABS-CBN with, it’s really Pau.”

Hearing this from Janine, Paulo said: “I’ve always wanted to welcome you here. Let me just share with you a quick trivia on Janine: She was supposed to sign up with ABS-CBN a few years ago but the negotiation got problematic so the deal didn’t push through. I knew of this because we’re from the same management, so I sort of get the stories first hand. Our manager said Janine was crying because she already wanted to transfer years back.

Started as a joke

“After that, I would always see Janine on magazine covers or on social media posts, and I’ve always wondered, ‘How’s Janine doing?’ It makes me want to work with her because I know she has more to offer; and that she has been winning awards here and there. When it comes to Janine I feel like a manager or someone who always needs to help her, to support her all through out,” Paulo declared.

Janine said she actually asked Paulo if she could be his leading lady. “This is not a joke. While we were shooting our film, there were already talks of Pau doing another teleserye. He doesn’t have a partner yet at that time so I said, ‘baka pwede ako na lang.’ I said it as a joke, but you know that jokes are half meant. I was really hoping to eventually work with Pau on television. I’m super happy with how things turned out. I really believe that if you tell the Universe what you want, it will really happen, even if it starts out as a joke.”