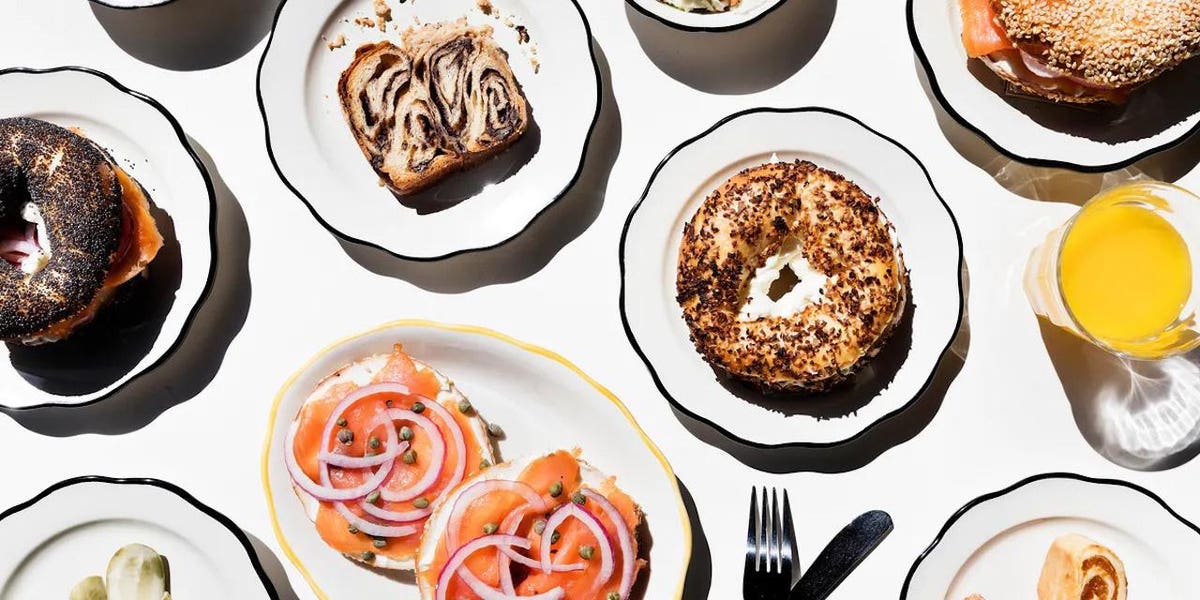 The L.A. bagel wars have a crunchy new contender in the mix. Wise Sons, with a half dozen popular locations in the San Francisco area, brings its poppy seed magic to downtown Culver City in the midst of a full-on SoCal bagel renaissance.

Co-founder Evan Bloom is actually an L.A. kid, having grown up in Ventura, noshing on pastrami and the like at Brent’s, Langer’s, and also Pico Kosher Deli. But times are changing for the Jewish comfort food biz. The week Wise Sons opened its Culver City spot was the same week the iconic West Hollywood deli Greenblatt’s closed after 95 years in operation.

Still, a new deli’s a new deli. To put Wise Sons to the truest test, I opted to enjoy my first taste of the menu after not eating for 24 hours. It was post Yom Kippur, just to be clear; but what better way to savor the flavors of break-the-fast essentials such as bagels (all baked on premises in Culver City), smoked salmon, and a bounty of cream cheese shmears? My panel of dozen super-fussy aficionados (including my 84-year-old mom) gathered to lay critical waste to the new bagel kid in town, but guess what? The crowd loved the spread: a D-Luxe Smoked Fish Platter for 12, with 8 oz shmears, smoked salmon, smoked trout salad, bubbe-worthy fixins, a chocolate babka loaf and a dozen assorted rugelach. Next-gen deli menus sometimes lack the soul and richness of old school taste memories but the Wise Sons order got it all right. The bagels had just the right crisp-to-chewy ratio. The smoked fish didn’t shy away from flavor but wasn’t too salty. And my mother kept asking, “Who made the babka?” High praise from the family’s matriarch of pickles and pumpernickel.

I spoke to Bloom about opening in L.A., his deep roots in the SoCal deli scene and why certain classics never go out of style.

How long has Wise Sons been part of the dream?

Evan Bloom: How to categorize dream? We started as a project in my backyard and opened officially about 10 years ago in the Bay Area. We were making pastrami that was an idealized version of a classic. It’s hard in a place like San Francisco. You can’t get that melt in your mouth, hand-sliced flavor I remember from childhood. We did a lot of testing and tasting. We invited people over and soon enough it turned into a little bit more of a business.

You’re not a chef, though?

Evan Bloom: I don’t have a restaurant background, no. I worked in the kitchen at Berkeley Hillel for two years. But I ate a lot of great deli food growing up. I grew up in Ventura and spent most Jewish holidays with my grandparents in the in the Pico neighborhood. All this time, I’ve wanted to get back to L.A. and open something here. We were eyeing the opportunity for years, and then this amazing spot in Culver City came up.

Culver City is so hot right now. Even during the pandemic, it’s been booming with new restaurants and food markets, new public spaces, even a new bookstore.

Evan Bloom: And miraculously, there wasn’t a Jewish deli in sight. We saw the need.

Greenblatt’s closed right when you opened. Cautionary tale or end of an outmoded model?

Evan Bloom: It’s a tough business. Restaurants in general are tough, and delis are tougher and the pandemic made it all even harder. Delis have a discerning but ageing clientele. Many deli menus are very large. It’s hard to keep up quality while also keeping costs down. Meat is expensive. People don’t want to pay what 5 to 8 oz of brisket should truly cost. We knew all that going into it. We knew that delis are traditionally big restarants with big menus. So, we slimmed down the menu. Orders are all taken by way of counter service and we focus on the absolute classic favorites: Bagels and smoked salmon. Pastrami and pastrami rubens. Breakfast sandwiches. Chocolate babka.

Evan Bloom: Good, right? We also know that the L.A. deli consumer is a bit more educated on this type of food even than the Bay Area consumers. People came in and got straight to the point. How’s your pastrami? How’s your smoked salmon? The passions for this type of food here go deep.

Evan Bloom: My grandparents were orthodox and we spent a lot of time at Pico Kosher deli. It was around corner from our house. I appreciate Brent’s which moved out to Westlake. It wasn’t just L.A., though. My tastes extend far. I loved the Rascal House in Miami Beach. I used to order corned beef on challah with ketchup. But please don’t tell anyone.

Evan Bloom: We want to be a neighborhood restaurant, first and foremost. We want to be a community deli, and also represent California and creative Jewish cuisine. A lot of people think it’s a throwback but we’re here to make new memories for families. So many young families and couples live in Culver City and the surrounding areas. We want to be part of that extended family.

You just survived the Jewish high holidays. What’s next?

Evan Bloom: Hanukkah. We’re having a Latke fest. Up in San Francisco, we make 20,000 latkes every year. It won’t be that many in Culver City, but it will be a nonstop, homemade apple sauce, sour cream fest. Maybe with roasted veggies, too. We’ve taken the flavors we love and spruced them up a little. What’s not to like?