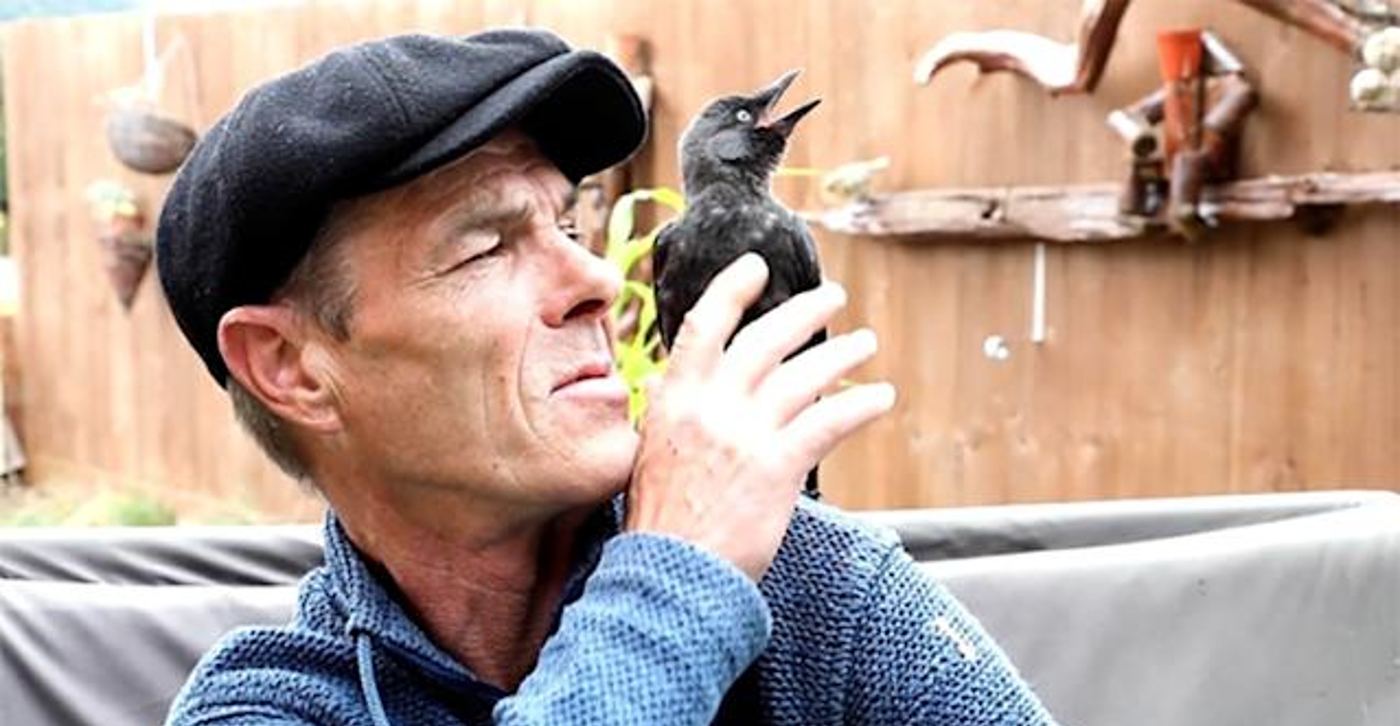 Meet the man and jackdaw who have an adorable bond after a chance roadside encounter, and now even go on bicycle rides together.

55-year-old Michael Smith spotted an injured baby jackdaw lying on the roadside as he cycled home one evening in May.

He scooped up the tiny bird, now named Patch, and took him home where he made him a little nest and fed him scrambled eggs.

Now recovered, and about 16 weeks old, Patch has spread his wings, but comes back to his rescuer when Michael calls.

Bird and man have such a close relationship that Patch gives his friend little beaky kisses and hitches lifts on his bike rides and walks.

Patch has been a celebrity guest at a wedding, and Michael loves him so much he even slept rough one night when his feathered friend didn’t come out of a tree.

Michael, an ex-builder from Malvern in Worcestershire, said, “I love nature and animals, so I couldn’t leave him injured in the hedgerow.

“He’s like my best friend now, and I spend as much time with him as possible. When I’m without him I’m thinking about him, and when I see him again he does a little joyful squark that is different from his normal screech. He’s the best pet and everyone loves him. He is the talk of the town, and if I’m without him everyone’s asking after him.”

MORE: Adorable Footage Shows Family of Ducks Being ‘Ushered’ Out of Library After they Waddled in Off the Street

Michael suspected Patch, who he thinks is a boy, had been attacked by another animal when he found him with a mangled wing.

After living in an old pigeon box Michael got from a friend, and tucking into scrambled and boiled eggs, bread and milk, Patch took four weeks to recover use of his wing.

Michael still feeds Patch mealworms, and fruit like cherries and grapes, but the now-recovered bird catches moths, wasps, and flies for himself.

Patch lives in an aviary that Michael built in the garden, but comes in for play dates and occasional sleepovers in the house Michael shares with his mother 78-year-old mother Mary.

Michael said, “People call me the bird whisperer, or bird-man of Malvern. It came quite naturally to me. And I remembered all these tales I’ve heard about people rescuing birds and forming a bond.”

CHECK OUT: Clever Cockatoos Craft 3-Piece Tool Set to Extract Fruit – Becoming Only 4th Animal Species to Do So

“He sits on my shoulder and puts his little beak to my face or gently nibbles my ear. He lets me stroke him under his breast and his feathers on his back all quiver. And he lets me rub his beak. He’s so much fun.

“I was quite well known around here but I’m even more so now: it’s a lovely thing to be known for,” said Michael.

When out walking, he hops down to play in puddles, and once enjoyed paddling in a stream on a Malvern hills excursion.

“Having him is such a lovely thing to happen.”

(MEET Mike and Patch in the video below.)