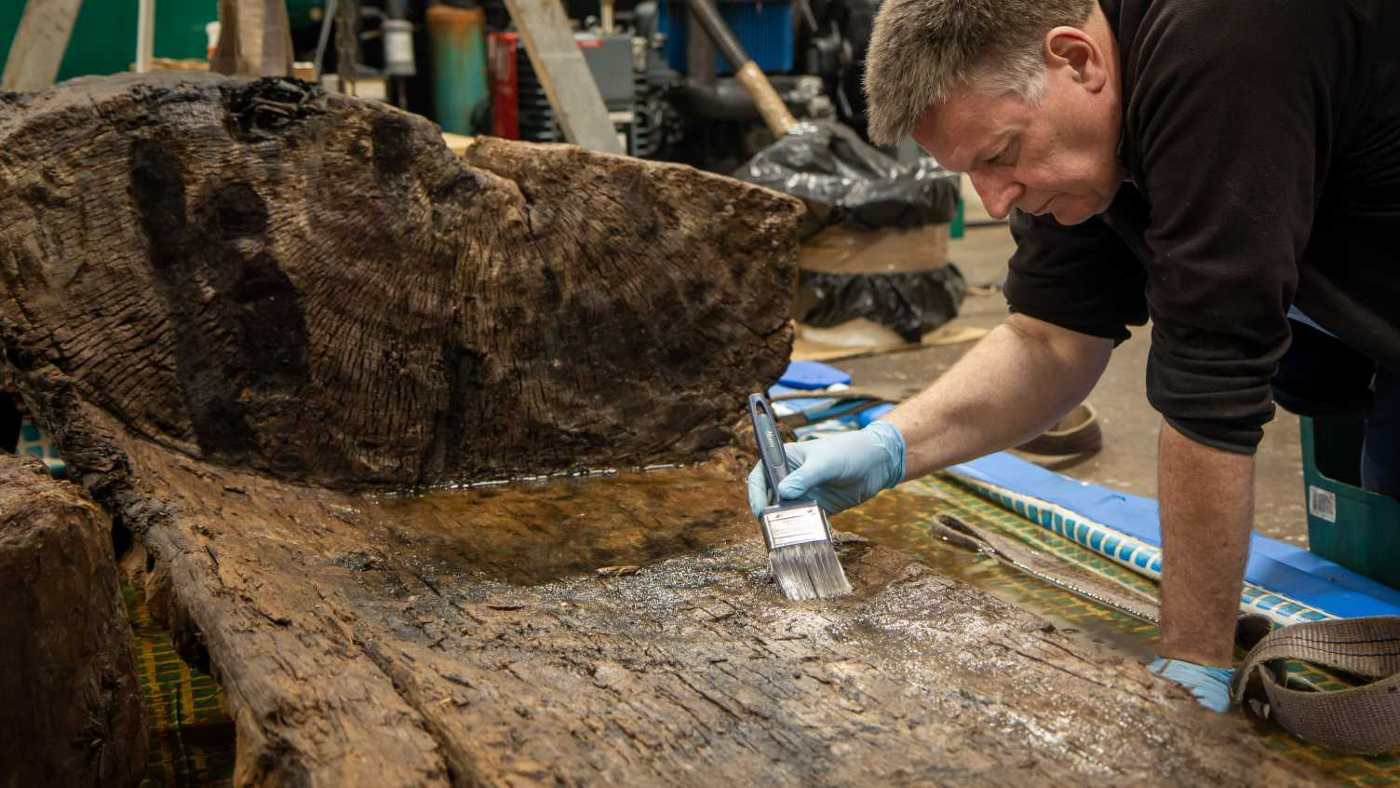 An early Bronze Age log coffin containing the remains of a man buried with an axe thought to date from 4,000 years ago has been discovered accidentally on a golf course.

The discovery of the coffin and its contents sparked a rescue mission funded by a £70,000 ($97,000) grant from Historic England and supported by a team of staff and students from the University of Sheffield’s Department of Archaeology working nearby who offered their assistance.

The coffin, which is three meters long and one meter wide, was specially protected to ensure the delicate structure did not crumble after it was exposed to the sun and air.

It was made from hollowing out a tree trunk, and plants were used to cushion the body, then a gravel mound was raised over the grave; practices that were only afforded to people with a high status within Bronze Age society.

The remarkable find was made by chance during works to a pond at Tetney Golf Club in July 2018, during a spell of hot weather. The golf club’s owner, Mark Casswell, was put in contact with the Portable Antiquities Scheme and Historic England.

Following a year of cold storage while being assessed, it was moved to York Archaeological Trust where it has been undergoing preservation work.

According to the archaeologists, the axe seems more a symbol of authority than a practical tool, while the coffin gives an insight into how social hierarchy was marked out in the early Bronze Age.

CHECK OUT: 1,500-Year-Old Skeletons Found Locked in Loving Embrace Might Have Been ‘Romeo and Juliet’ Ending in China

So far, yew or juniper leaves have been found within the coffin and further work is planned to discover more about how plants were used in this burial practice, and the time of year the burial took place.

The axe is extremely rare, there’s thought to be only 12 known from Britain, especially because the wooden shaft survives as well as the stone head.

The log-coffin was originally created by carving a large, single, fast-growing oak tree.

It used ‘split timber’ construction technique, where the tree trunk was split lengthways first to create a half or slightly larger log for carving, rather than hollowing out a whole tree from scratch. It probably had a lid, of which part survives.

There are around 65 early Bronze Age log coffins known from Britain as it is rare for them to survive, given they are made of wood. In this case a deep layer of silt aided its preservation. However, once the coffin was exposed it was a race to prevent its rapid deterioration.

Tim Allen, of Historic England, said, “The man buried at Tetney lived in a very different world to ours but like ours, it was a changing environment, rising sea levels and coastal flooding ultimately covered his grave and burial mound in a deep layer of silt that aided its preservation.

MORE: A Sorceress’ Toolkit Has Been Discovered in the Ashes of Pompeii

Mark Casswell, owner of Tetney Golf Club, added, “My family farmed here for years before we opened the Golf Course and I’d never have imagined that there was a whole other world buried under the fields.

“It’s amazing how well preserved the axe is with its handle still there like it was made yesterday. We’ll have a nice photograph of it up on the Clubhouse wall, all those years that people have been living here working the land, it’s certainly something to think about while you’re playing your way round the course.”

UNEARTH This Fascinating Story for Your Chums…