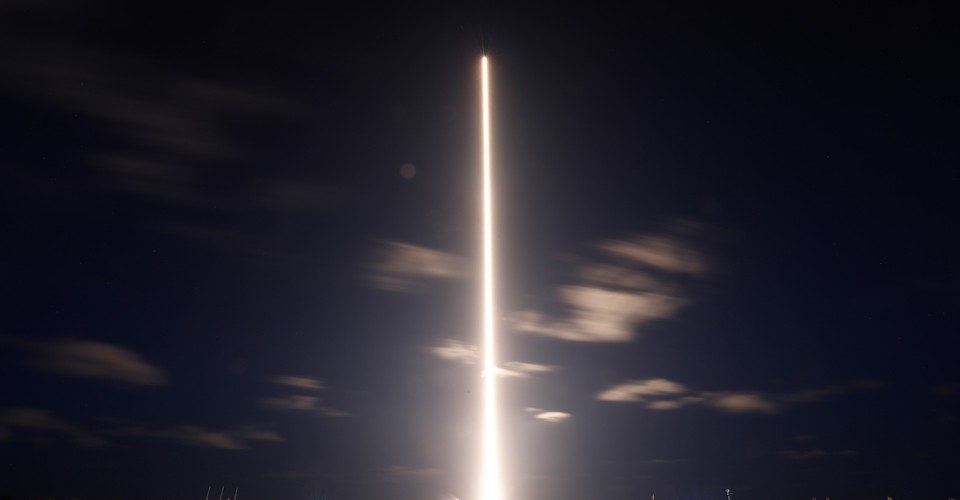 CAPE CANAVERAL, Fla.—Before liftoff, the moon was the brightest object in the sky, followed by the tiny, shining pinpricks of Venus, Jupiter, and Saturn. Then the rocket rose with a roar, a white-hot needle casting the dark evening in a soft gold. A crew of four sat atop it, strapped inside a small capsule. And none of them—not one—were professional astronauts.

The passengers who launched today are SpaceX’s first-ever private crew. They are Sian Proctor, a geoscience professor and artist; Hayley Arceneaux, a physician assistant and childhood cancer survivor; Chris Sembroski, a data engineer and Iraq War veteran; and Jared Isaacman, the tech businessman who paid for all their seats. Not long ago, they were strangers. Now they are travel buddies and—in the case of Proctor, Arceneaux, and Sembroski—the benefactors of a billionaire with the means to make them all spacefarers.

The tourism era of American spaceflight is really, truly here. Yes, Jeff Bezos and Richard Branson flew to space this summer to inaugurate their space-tourism businesses and show off their high-flying services to their future customers, who will enrich the men even further. But their trips don’t compare to what the Inspiration4 crew has signed up for.

The space billionaires made quick suborbital jaunts to the edge of space to experience just a few minutes of weightlessness before falling back down. Isaacman, Proctor, Arceneaux, and Sembroski flew well beyond that boundary today, traveling at screaming speeds so they could not only reach orbit, but stay there for three days, looping around Earth as a satellite or a space station would. In fact, the Dragon capsule will orbit the planet about 100 miles higher than the International Space Station does.

And from way up there, coming home is not a matter of simply coasting back to Earth. When it’s time for the Inspiration4 crew to return, the Dragon capsule will experience scorching temperatures as it hurtles through the atmosphere. The vehicle, roasted like a marshmallow during reentry, will then splash down at sea.

This Inspiration4 mission is the first of its kind. Non-professional astronauts have flown into orbit before—ultra-wealthy private citizens have paid their way onto the ISS, and NASA’s current administrator flew on the space-shuttle mission when he was a U.S. representative in the ’80s. But these passengers flew on government-operated machines, accompanied by government-employed astronauts, and the government decided where they were going. Now, if you have enough money, you can charter your own private spaceflight, and even customize it to your liking.

The Inspiration4 passengers are flying on their own, without a SpaceX professional on board, and Elon Musk, SpaceX’s founder, seems to have determined that they’ll do just fine. Unlike the NASA space shuttles that once took astronauts to orbit, the Dragon capsule can fly itself from launch to landing. Last year, when two NASA astronauts test-drove the vehicle for the first time, they took it off autopilot for a few minutes just to see how it handled, but the flight software did the rest for them.

The Inspiration4 crew seems to think they’ll do just fine too. They arrived here at Kennedy Space Center last week in fighter jets, just like professional astronauts before them, looking the part in their black flight suits adorned with mission patches. The Inspiration4 crew did receive about six months of training to learn the ins and outs of their spaceship, far less than the typical NASA astronaut but considerably more than future Blue Origin or Virgin Galactic passengers. And as they flew over Florida’s Space Coast, they changed something fundamental about it. The area around Kennedy has been a tourist destination for decades, its beaches and palm-tree-lined streets filling up with spectators craning their heads to catch a glimpse of a rising rocket from afar. Now it’s a tourist destination of another kind. With enough money and a bit of luck, you can get on the launchpad yourself.

Musk, with his dreams of sending humans to Mars soon, would tell you that this kind of future is long overdue. But for nearly everyone else in the space industry, this moment arrived quicker than they imagined. Just a decade ago, the idea that SpaceX could fly people into space seemed far-fetched, especially at NASA, where agency officials felt they “knew how to do spaceflight better than anyone,” Phil McAlister, NASA’s director of commercial spaceflight development, said last year. Now SpaceX isn’t just doing spaceflight as well as NASA did; it’s doing things NASA never attempted.

When the American space-shuttle program ended in 2011 because of cost and safety concerns, NASA needed a new, different form of transportation for its astronauts. The agency had always relied on private contractors to build, but this time, the development—from the complex propulsion systems to the cabin’s toilet—was entirely in SpaceX’s hands. In the spring of last year, SpaceX safely flew two astronauts to the International Space Station and back, while NASA watched over its shoulder. The company has flown two more crews since. Today, SpaceX provides the only transportation into orbit from American soil.

Read: ‘Thanks for flying SpaceX’

SpaceX will continue to fly professional astronauts on NASA’s behalf. But interspersed between these formal astronaut work assignments will be flashy trips for private citizens who want an adrenaline rush. NASA’s involvement is confined to the historic launchpad where Apollo missions left for the moon, which it now leases to SpaceX. With SpaceX, space travel is a real customer experience.

You can see it in the Dragon’s interior—the minimalist design, all clean lines, with touch-screen displays and cushy fabrics. In the spacesuits, with their sleek black-and-white look, and in the shiny Teslas that bring passengers to the launchpad. In the big, bubble-shaped glass window that SpaceX has installed especially for this mission, so that its passengers can enjoy panoramic views of Earth sparkling below and the countless stars twinkling beyond. Professional astronauts don’t need it because they’re not there just for the views, but paying customers do.

The customer experience extends all the way into orbit. There’s the autonomous flight software, a feature private citizens will expect to take care of the ride. (McAlister, the NASA official, once told me that relinquishing control to the flight software was the hardest thing that the two NASA astronauts had to do during SpaceX’s test flight last year.) There’s the menu: Proctor asked SpaceX to supply cold pizza for the crew’s first meal. And there’s the flight plan: Musk let Isaacman, a licensed pilot with experience flying fighter jets, decide how many days the crew would spend in space, and even the altitude the capsule would reach. Isaacman decided how to fill out the crew, and he went about it in unusual ways, including a Super Bowl commercial advertising a raffle for one of the seats.

Isaacman has said that although he could have invited “a bunch of my pilot buddies,” to space, he knew that the lineup for such a historic mission would carry meaning. But someday, private crews will look more like the most privileged classes. SpaceX has already agreed to fly Tom Cruise to the space station to shoot a movie. The main requirement for SpaceX passengers, Musk has said, is the capacity to handle an “intense roller-coaster ride.”

As private spaceflight expands, the traditional picture of astronauts—embedded in the American consciousness as nearly mythical figures with “the right stuff”—will change. Astronaut could become a synonym for wealthy, and spaceflight for luxury. The infrastructure of spaceflight will likely shift to accommodate them; perhaps in the future, the room where passengers suit up will have a snack table, and maybe some cucumber water too—special details befitting of an already extraordinary service. When John Glenn orbited the Earth, he did it for America. Future space tourists will be doing it for fun.

Although the aesthetics of spaceflight may change, the physics of it won’t. Space travel is just as dangerous when “regular” people fly as when NASA astronauts do it. When NASA tried to take a non-professional astronaut to space in 1986—Christa McAuliffe, a high-school teacher—the attempt ended in tragedy. SpaceX is even taking an extra risk with this flight, and, in a sign of the changing times, the decision was made at the customers’ request. The crew asked SpaceX to take the capsule to an unusually high altitude of 360 miles. The Dragon has never flown this high, and the crew will experience greater exposure to cosmic radiation than astronauts on the space station. Isaacman said this week that the crew wanted “to get a little outside of our comfort zone,” to fly beyond the ISS. Yes, it adds risk, he said, but he feels confident that SpaceX can pull it off.

And SpaceX is determined to avoid a horrible outcome. Over the years, employees, including senior leadership, have received briefings about the aftermath of the two space-shuttle disasters, which together killed 14 astronauts, and the launchpad fire during the Apollo program that killed three. They’ve met with NASA employees who lived through the tragedies, and listened as they told SpaceX about the mistakes the agency made and how to do better. When SpaceX was preparing for its first crewed flight last year, technicians’ work orders bore pictures of Doug Hurley and Bob Behnken, the NASA astronauts assigned to the mission.

When I asked Arceneaux this week about the moment she decided that she was willing to put her life in SpaceX’s hands, she told me about her third visit to the company’s headquarters in California, early on in her training. Arceneaux and her mom sat in on a long meeting with SpaceX’s lead engineers, who went over every detail of her mission. “At the end of the day, we looked at each other and said, we trust them,” Arceneaux told me.

Future private astronauts will have to make the same determination for themselves. They must feel confident not only that SpaceX will give them a glorious one-in-a-lifetime experience, but that the company will also keep them alive. The Dragon capsule is less complicated than the space shuttles were, and the system has an abort option that the NASA spacecraft didn’t; in the case of an emergency right after liftoff, Dragon can push itself away from the Falcon 9 rocket and toward safety.

But ask anyone who worked at NASA during the shuttle years, or the astronauts who flew on those vehicles: Spaceflight is risky, and a fatal disaster is not a matter of if, but when. No amount of money can protect you from that. SpaceX passengers, as well as the family and friends they leave behind on Earth, must believe in SpaceX through it all—the teeth-rattling launch, the careful maneuvering through space, the perilous journey down. They’ll need to trust SpaceX in those wonderful, wide-awake moments, when the view of Earth from the cupola leaves them speechless. Even more important, they’ll need to feel that trust in the quiet, vulnerable times too, as they change into pajamas and doze off in their sleeping bags, tethered to their seat so they don’t knock into each other, as the capsule steers itself through space.