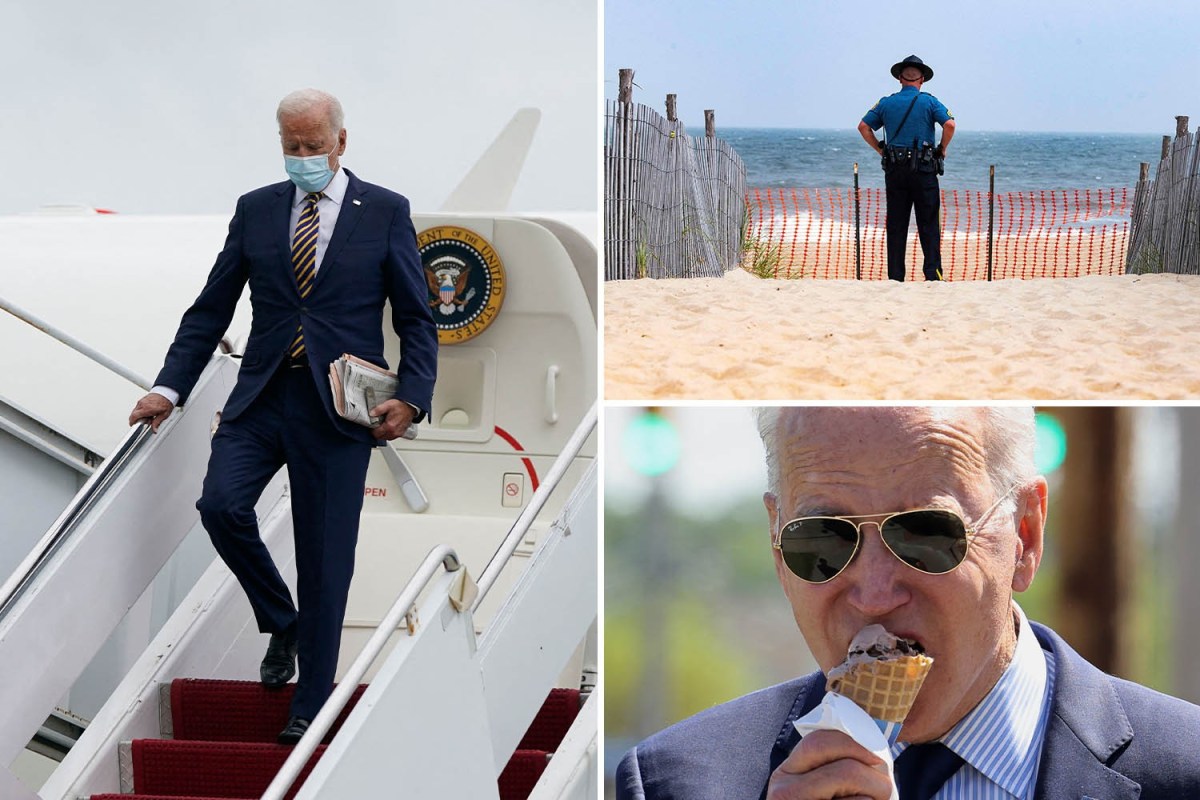 PRESIDENT Joe Biden has been slammed after he took another long weekend at his beach house despite his administration facing a number of crises.

Biden, 78, left the White House before noon Friday for his house in Rehoboth Beach, Delaware, with no apparent events in his public schedule.

His decision to take time out comes as he faces a number of problems including the FDA rejecting his push for Covid-19 booster shots, the Pentagon admitting it killed Afghan civilians and France recalling its ambassador.

Fox News’ Sean Hannity launched a scathing attack on Biden, questioning his commitment to the country.

“Someone in the administration needs to remind Joe that he’s the president of the United States – he needs to get off his a** and get to work,” Hannity said.

“If he’s too weak and frail and slow to handle the job seven days a week, he should step down and retire because right now… there are serious crises on multiple fronts.”

Biden is still facing questions over the chaotic pull-out of troops from Afghanistan.

The Pentagon admitted Friday it mistakenly killed 10 innocent civilians including a US aid contractor and seven children on August 29, one day before the final evacuation flights from Kabul – and not Islamic State terrorists, as originally claimed.

“Our investigation now concludes that the strike was a tragic mistake,’ said the head of US Central Command, Marine Corps General Frank McKenzie.

On the same day, the Food and Drug Administration (FDA) panel voted 16-2 to reject a request for approval of “booster” shots of Pfizer’s two-dose Covid-19 vaccine, upending months of planning by the Biden administration.

Last month the FDA did approve a third shot for senior citizens having green-lit the plan to give people with compromised immune systems another jab.

The Biden administration had set aside enough booster shots for most Americans despite calls from health groups and the Third World to prioritize other countries, saying new mutations of the deadly virus could emerge.

Currently, more than 76 per cent of US adults have been given at least one shot, according to CDC figures, but new infections and deaths have recently soared due to the spread of the Delta variant.

The border crisis has been steadily worsening with reports saying around 9,000 migrants, mainly from Haiti, have been gathering near Texas in a desperate bid to gain asylum.

The surge came after word got out that the Biden administration would not deport Haitians who enter the country illegally, following an earthquake in the country.

US officials are said to be overwhelmed by the numbers of people wading daily across the Rio Grande at Del Rio.

People have set up a vast camp under the International Bridge while they wait to be processed by US Customs and Border Patrol.

Texas Governor Greg Abbott said he was sending National Guard troops and officers with the Texas Department of Public Safety to the state’s ports of entry to “deter crossings” and he compared the migrant crisis to the chaotic withdrawal of US troops from Afghanistan.

“The Biden administration is in complete disarray and is handling the border crisis as badly as the evacuation from Afghanistan,” he said.

Compounding the problems for Biden has been France’s withdrawal of its ambassador.

The diplomatic crisis was caused the new security pact with the UK and Australia, known as AUKUS, which will help Australia build nuclear submarines to counter the potential threat from China and rising tensions in the region.

France has been America’s oldest ally, being the first country to recognize the US government with a treaty in 1778, and the two republics have long had close and friendly diplomatic relations.

The French government is furious with the pact which saw Canberra cancel a $90 billion submarine contract with Paris.

According to the New York Post, Biden has made 21 trips to his homes in Delaware since taking office on January 20.

Most of those trips were to Wilmington.

A poll conducted by Reuters/Ipsos Thursday revealed a 50 per cent disapproval and 46 approval of Biden’s performance as president.

A Rasmussen poll gauged disapproval even higher, at 55 per cent with just 43 percent approving of Biden’s performance.