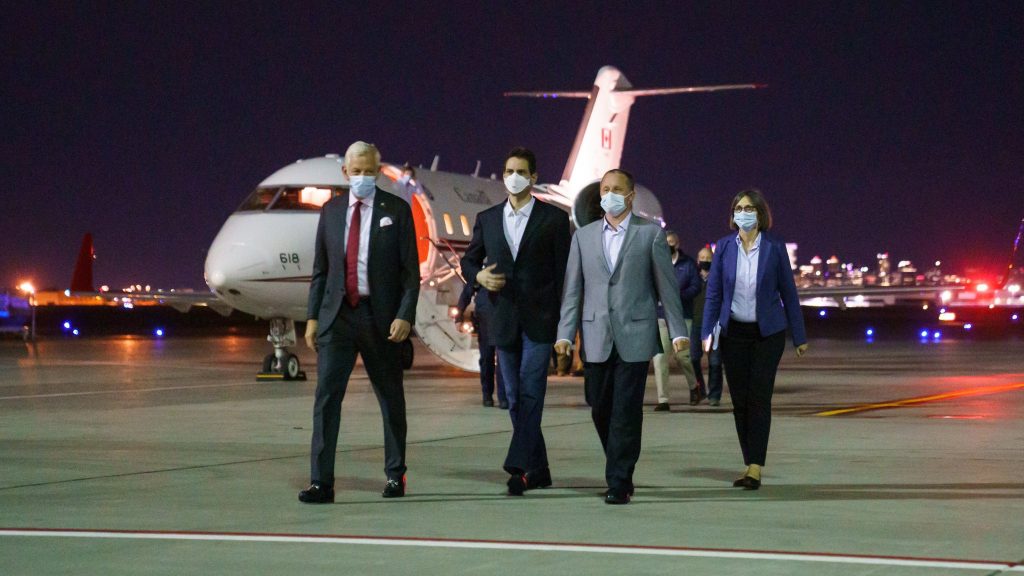 The aftermath of Canada’s long fight with China over the imprisonment of Michael Spavor and Michael Kovrig has spawned a new challenge: whether to join allies such as the United States and Australia in taking a more confrontational stance toward China.

Some analysts saw hints of a potentially tougher approach in what appeared to be a throwaway line in a congratulatory note that Prime Minister Justin Trudeau sent to his new Japanese counterpart, Fumio Kishida, this past week.

Trudeau twice used the label “Indo-Pacific” to stress the importance of co-operating with Japan on shared regional interests.

For some observers, that was a signal that Canada was moving toward a tougher posture toward future relations with China.

Paul Evans, a China expert at the University of British Columbia, said the use of that label — Indo-Pacific — denoted a subtle but distinct shift in how Canada traditionally viewed the region.

Canada has traditionally referred to the vast geopolitical entity on the other side of the Pacific Ocean as the “Asia-Pacific,” a label that Evans said clearly included China as well as its many regional neighbours, while “Indo-Pacific” is a shorthand that is meant to exclude China.

“This may sound just like words, but there’s a very serious difference,” said Evans.

“The phrase Indo-Pacific draws us into this strategic moment of great power rivalry. Indo-Pacific is fundamentally about China’s rise and responses to it.”

Moving forward, Evans expects to see Canada adopt a “softer version” of the label, one that means “sometimes countering China, often co-operating with China on economic and other matters. So, it’s a softer, more inclusive version.”

The quote Trudeau’s office released in his statement on Kishida’s swearing-in appeared to reflect that.

“Together, we will advance our shared vision for a free and open Indo-Pacific and take ambitious action in the fight against climate change,” Trudeau said in the written statement. “As we continue to address the global impacts of the COVID-19 pandemic, we will work to promote greater prosperity for people in Canada and Japan and throughout the Indo-Pacific region.”

Others say the time has come to Canada to hit back harder at China now that Kovrig and Spavor are safe.

Lawrence Herman, an international trade lawyer and former Canadian diplomat, said Canada needs a “strong and realistic” trade policy more in line with the Americans and Australians. That should start with Canada immediately banning the Chinese firm Huawei from supplying equipment for its next generation 5G internet service. All of Canada’s allies in the Five Eyes intelligence sharing network — the U.S., Australia, Britain and New Zealand — have banned Huawei.

“With that, the government should move on to articulate other areas where business and trade can continue — but under defined terms and conditions that meet Canadian policies, including China acting fairly and responsibly and respecting Canadian commercial interests, human rights and other issues,” said Herman.

Guy Saint-Jacques, a former Canadian ambassador to China, said that while Beijing has now entrenched “hostage diplomacy” as a foreign policy tool, its use of “trade as a weapon” needs to be countered in a co-ordinated way by Canada and its allies.

China imposed punitive tariffs after Australia called for an international investigation into the root cause of the COVID-19 pandemic. Beijing’s economic retaliation was similar to the bans it imposed on Canadian Canola and meat exports while it was holding Kovrig and Spavor and pushing Ottawa to free Chinese high-tech executive Meng Wanzhou after her arrest by the RCMP on an American extradition warrant.

Australia has also fended off Chinese interference in its political affairs. Last month, Australia formed a new three-country security alliance with the U.S. and Britain that will see it acquire a fleet of nuclear-powered submarines.

Saint-Jacques said it was “a good first step” that Canada spearheaded the international declaration against arbitrary detention earlier this year by getting the support of more than 60 countries.

“Canada should work with our allies to take this one step further and develop criteria that would trigger common responses by the signatory countries, including sanctions on the weaponization of trade,” said Saint-Jacques.

“If Australia, Canada and the U.S. were to agree that if one of the three is subject to sanctions by China, then the two others would agree not to increase their exports to China beyond their historical share of the market there. That would prevent China from playing one country against the other.”

Last month, Politico reported that the Biden administration’s nominee for ambassadorship to Canada wants to see the Trudeau government release its “framework for its overall China policy.” David Cohen told his nomination hearing before the Senate Foreign Relations Committee that he wanted to see greater American and Canadian co-operation to counter the “existential threat that is China.”

In Canada, the Conservative opposition has called for the Liberals to release such a document as well.

A senior federal official, who spoke on the condition of anonymity because of the sensitivity of the issue, said there are no plans to publish a specific new document on China any time soon. The official described the government’s approach as more of an evolving strategy and rooted in tougher statements from former foreign affairs minister Francois-Philippe Champagne and by Foreign Affairs Minister Marc Garneau more recently.

Last year, Champagne supported Taiwan’s bid to take part in World Health Organization meetings on COVID-19 over the strident objections of China. Earlier this year, Garneau said China had committed “egregious human rights violations” in a “systematic campaign of repression” against its Muslim Uyghur population when he announced Canada was joining Britain, the U.S. and the European Union in imposing sanctions on four Chinese officials.

Saint-Jacques said Canada and its allies should aim higher, targeting President Xi Jinping. That can take the form of Western leaders boycotting the opening of the February 2022 Beijing Winter Olympics, which would be seen as an embarrassment by the Chinese leader.

“There is grumbling inside the Communist Party about the direction that Xi Jinping has given to the country and people have been saying, ‘why have we made enemies of Australia and Canada?’ ”

Next fall, Xi will be seeking a third term as head of the Communist party, said Saint-Jacques.

“So, the more pressure we can put, the more that will force a discussion inside the party about those issues.”