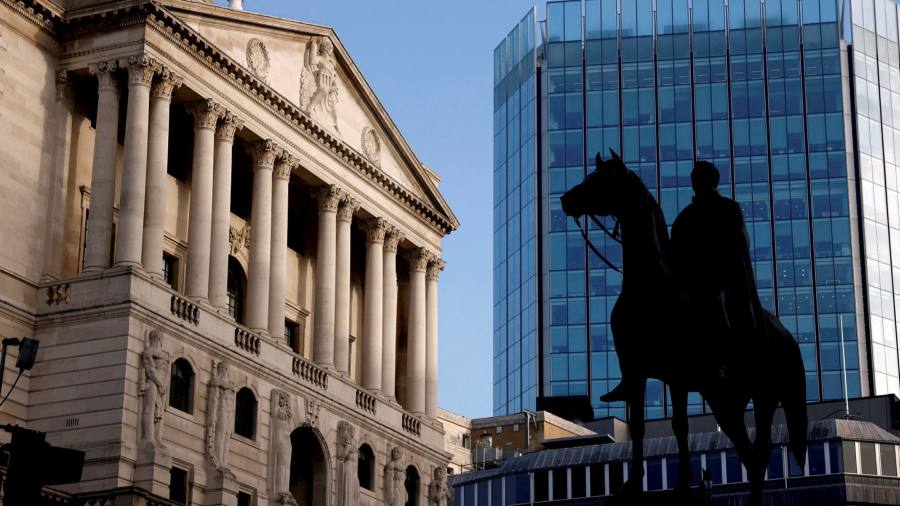 Investors now expect the Bank of England to increase rates in December for the first time since the Covid-19 crisis after policymakers sounded the alarm over inflation, pushing UK government bond yields to their highest level in two-and-a-half years.

Traders had already been tweaking bets on the BoE’s lift-off from the record low of 0.1 per cent since the central bank last month signalled concern over high inflation and said it could raise rates even before its bond-buying programme ran out at the end of the year.

They further increased those wagers on Monday after two BoE rate-setters, including governor Andrew Bailey, used weekend interviews to underline risks stemming from a burst in inflation that was proving surprisingly persistent.

Markets are now pricing a rise to 0.25 per cent in the base rate by December, with a further increase to 0.5 per cent by March next year. A month ago investors were not anticipating the first move from the BoE until the summer of 2022. At the end of next year, interest rates are expected to have climbed almost to 1 per cent.

Bailey said in an interview with the Yorkshire Post published on Saturday that he was “concerned about inflation”, and that the BoE had a difficult job on its hands in preventing high inflation expectations becoming embedded. His fellow Monetary Policy Committee member Michael Saunders told the Sunday Telegraph that the recent move in markets to price in earlier rate increases was “appropriate”.

Investors are expecting annual UK inflation to peak at about 6 per cent next spring as the surge in energy prices feeds through to consumers. But markets also anticipate longer-term price pressures, with inflation priced to average about 3 per cent over the coming decade, the highest level seen since 2008 and well above the BoE’s 2 per cent target.

“The market is currently pricing a humongous overshoot in inflation, for all sorts of reasons from global pricing of oil and gas to our own homegrown problems about lack of [lorry] drivers and labour in general,” said Peter Schaffrik, chief European macro strategist at RBC Capital Markets. “The BoE is saying we have to be careful inflation expectations don’t fester and become a self-fulfilling prophecy — therefore as a policy response we have to nip this in the bud. That’s why you’ve seen the market turn very hawkish.”

The prospect of higher interest rates dented UK government bond prices on Monday, with 10-year gilt yields climbing to their highest since May 2019 at 1.21 per cent. Two months ago they were slightly higher than 0.5 per cent.

Other big government bond markets, including Germany and the US, have also been hit by rising inflation expectations in recent weeks — but the increases in the UK have been much sharper, suggesting investors believe Britain faces a particularly challenging period ahead.

The gap between UK and German 10-year government borrowing costs has widened to 1.33 percentage points, the broadest spread since before the Brexit referendum in June 2016.

Typically, higher bond yields relative to other economies would give sterling a boost, but the currency has fallen out of favour with investors. The pound edged higher on Monday to trade at £0.848 versus the euro, but has seen little overall change against the single currency over the past two months.

“Sterling’s fall from grace over the past month has been one of the more notable developments [in major developed market currencies],” said Kamal Sharma, a foreign exchange strategist at Bank of America, in a note to clients, adding that the pound’s typical correlation with moves in bond markets has broken down.

He said: “While we believed that the end-September slide in the pound had been excessive, sterling’s issues have been compounded by the deteriorating UK news flow and what seems to be a ‘lightbulb’ moment that Brexit actually matters.”