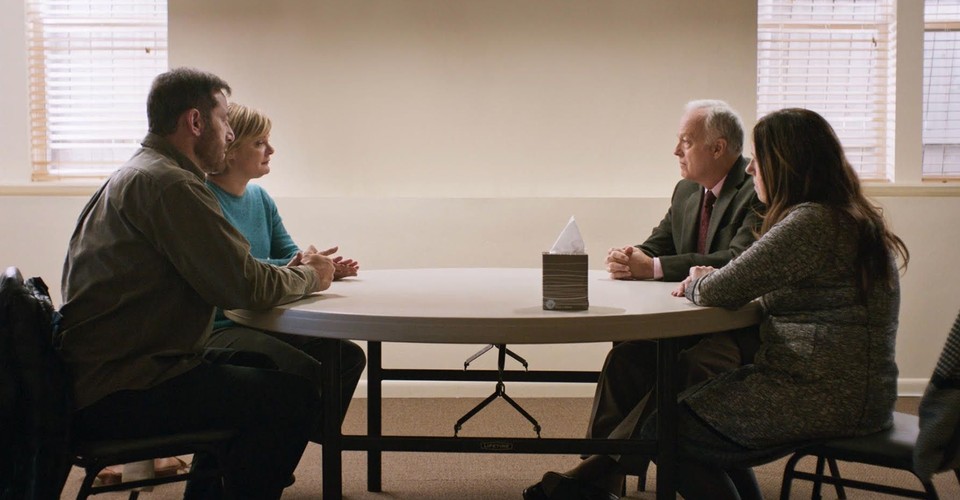 The events in Mass are spurred by a school shooting, but the film’s true focus is the challenge of talking through grief.

For the first 40 minutes of its runtime, the film Mass refuses to reveal why its four protagonists—two sets of parents—have gathered in a small room in a church basement. They don’t appear to be friends; they’re polite toward one another, but cold. They’re not there to pray or to eat the food that’s been provided. Their conversation is stilted and awkward, descending into silence every few beats.

Finally Gail, played by Martha Plimpton, clarifies their situation. She squeezes the words out, as if desperate to hold them in but incapable of doing so any longer: “Why do I want to know about your son?” she asks. “Because he killed mine.”

Mass, which is now in theaters, is about the lasting trauma spurred by a school shooting that happened years before. Linda (played by Ann Dowd) and Richard (Reed Birney) are the parents of the shooter; Gail and Jay (Jason Isaacs), the parents of a victim. But the film doesn’t dwell on the tragedy that took their sons. It doesn’t indulge in flashbacks, never shows the two boys, and rarely moves outside the sunlit but stifling room. Instead the drama rests in the quartet’s private discussion, an attempt by all parties to move forward, whatever that means.

The writer-director Fran Kranz blocks Mass, his first film, like a stage play. Inspired by true stories about parents of shooters meeting parents of victims, as well as the Truth and Reconciliation Commission, in South Africa, Kranz delivers a delicately paced study not of a school shooting and its aftermath, but of the way people communicate grief. The conversation, which plays out in real time, captures the second-to-second emotional evolution of dealing with unfathomable loss: Their hesitancy to touch the subject of their sons’ deaths bubbles into geysers of vulnerability that they then try to quell. They struggle to modulate their expressions of pain and guilt, especially when their personal conclusions about the event haven’t crystallized as much as they thought—and perhaps never will.

In brewing such precise discomfort, Kranz forces the audience to concentrate deeply on what’s being said and, more important, unsaid. The characters, played meticulously by four top-of-the-line actors, all believe they understand why they’re there: Gail and Jay want more clarity, and, as they repeatedly insist, “to heal”; Linda and Richard feel it’s their responsibility to provide answers. But their exchange doesn’t unspool so neatly. Jay’s gun-control activism hides a buried anger. Linda’s obvious yearning for forgiveness—she offers Gail a handmade bouquet as a gift as soon as she enters the room—betrays her fear, while Richard’s matter-of-fact demeanor covers up a guilt he can’t shake.

This isn’t the typical approach for a school-shooting movie, an unfortunate subgenre born of America’s real-life crises. Recent films that use a school shooting as a backdrop, such as Lakewood and Run Hide Fight, focus primarily on the violence and horror. Others, such as Vox Lux and the Oscar-winning animated short film If Anything Happens I Love You, concentrate on the painful aftermath for survivors and relatives. The current creative impulse, it seems, is to lean into either the drama of the shooting or of its impact; anything else would be too messy.

Mass’s unusual approach—to consider how people communicate with one another—results in the rare dramatization of a school shooting’s lasting effects that feels truthful without being exploitative. That choice also helps the film resonate beyond its particular tragedy. The close examination of a single conversation shows the frustratingly familiar rhythms in discussions about other sensitive subjects, for instance. Self-editing phrases—“I’m just saying,” “It’s just,” “What I mean is”—pepper the dialogue; the characters are searching for the right words where there are none. In some scenes, they talk past one another, too eager to share their perspectives first. Midway through the film, Jay delivers a monologue about his memory of visiting the school after the shooting that gains speed like a runaway train. It obviously stings Linda and Richard, and the conversation shuts down. In moments like these, Mass understands how the inability to compassionately discuss grief perpetuates it. Yet both couples manage to continue talking, showing the value of empathy.

During a panel I moderated for The Atlantic Festival, Isaacs and Dowd briefly debated whether their film is about a school shooting at all. To Isaacs, it’s not, but Dowd disagreed. Looking back, I think they’re both right: Mass wouldn’t work without the event that led its foursome into that small church room, but its message—that the simple act of talking about trauma is an often overlooked step toward healing—also transcends its specific tragedy.