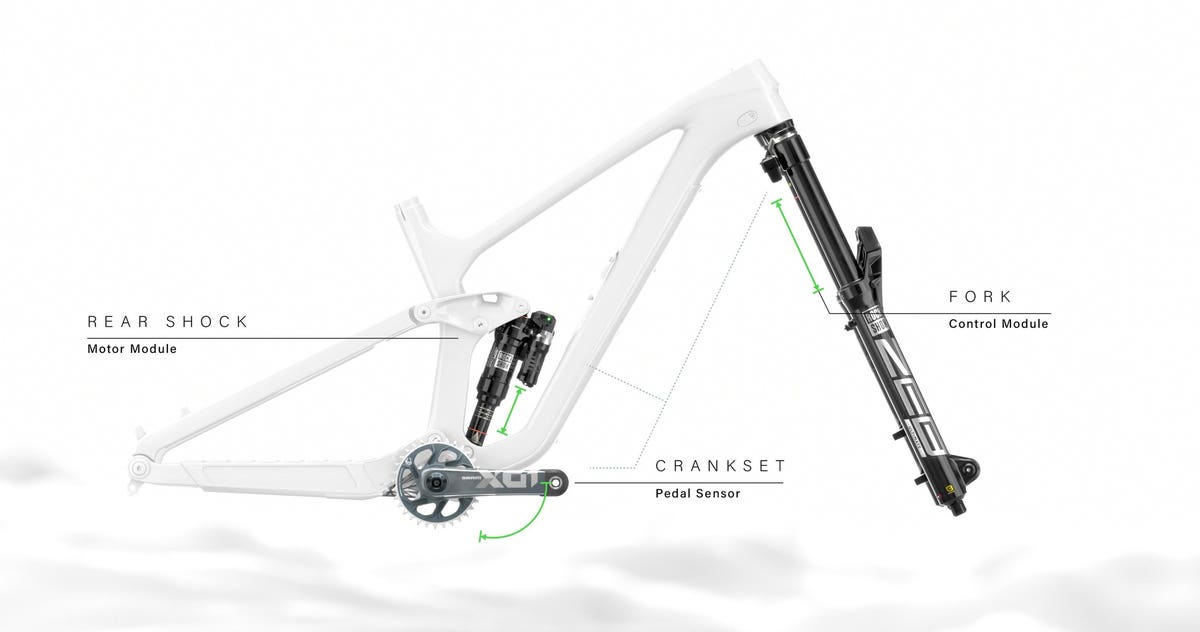 Technology is all about solving problems. Every startup investor deck puts this right up front. What is the problem your company or product solves? What pain does it address? Is it a vitamin or a cure? Is it a searing or mild pain? There are myriad problem metaphors for addressing market needs.

This is the approach I took in testing the new Flight Attendant suspension technology from RockShox, which is part of the SRAM family of brands. In cutting right to the chase, this is an automated system that adjusts both the fork and rear shock in real time to optimize for fun, handling and pedaling efficiency. Clearly, this achievement is easier said (and written) than done. SRAM invested the better part of a decade developing this technology, so it’s certainly worth exploring the mountain biking pain that Flight Attendant addresses and whether it’s worth the investment.

My Flight Attendant-equipped bike arrived about a month ago, which was perfectly timed for the Park City riding season. Indeed, the best time to ride the Wasatch Mountains runs from Labor Day through to ski season. It’s also a time when the lifts at Deer Valley and Park City Mountain Resort are still running, as the fall colors start lighting up the canopy in a blurred blaze of yellows, reds and oranges. I also took the bike down to Moab, Utah, which proved to be the ideal testing ground for this new tech.

SRAM sent me the Specialized S-Works Enduro LTD ($12,500), which is pretty much the biggest bike you’d ever want to pedal. It’s a 29er with beefy treads and 170mm of front and rear travel. The wheel base is huge, and when I loaded the Specialized SWAT compartment (under the bottle cage) with a spare tube, CO2 cartridges and tire plugs/levers, it weighed in at 35.5 pounds. That’s not light. To put that into context, my downhill bike with 200mm of travel (Santa Cruz V10) weighs a tad over 34 pounds. Of course, the Enduro LTD has a broad range of gears with AXS electric shifting, a RockShox Reverb AXS dropper post, and a couple extra batteries to power the Flight Attendant suspension. It’s a much more versatile bike with almost as much downhill capability as the V10. But you are expected to pedal it uphill…at least some of the time.

The Flight Attendant system consists of four or five key components, depending on how you look at it. First, the brain of the system lives in the fork and is powered by a standard AXS battery, the same one used on the rear derailleur and seatpost. The rear shock also has an AXS battery and is synchronized to the fork. The left shifter, which controls the dropper post, has an additional lever to manually control the suspension. And finally, there is a sensor in the crank and an inclinometer. If you’re keeping score, that’s four AXS batteries for a bike with this configuration.

Setting up the system will be familiar to anyone who’s paired other AXS components. It’s a series of button presses and blinking lights, and you can use the AXS mobile app to customize it all. What’s unique, though, is programming the inclinometer by “telling” Flight Attendant when the bike is level and when it’s leaning to one side. This is the first signal of how the system actually works. Because despite all the hardware, Flight Attendant essentially boils down to a computer algorithm.

The inputs to the algorithm include incline i.e. is the bike going uphill, downhill, and/or leaning to one side? The crank sensor communicates pedaling data, while the fork and rear shock send force/compression data being generated from both the trail (coming from below) and the rider (coming from above). It’s making calculations at a rate of 200 per second to determine the ideal suspension mode, and it switches accordingly between Open, Trail, and Closed. These are pretty self explanatory, but generally speaking, Open is for descending, Closed is for climbing, and Trail is for anything in between. What’s more, you can program bias toward Open or Closed, which essentially tweaks the algorithm to one’s personal preference. Finally, like any other air-sprung suspension system, you still have to set the front and rear air pressure for proper sag and ride feel. Then it’s ready to rip.

As of this writing, I’ve put just over 150 miles on the Flight Attendant system between Park City and Moab, Utah. This included several lifts and shuttle rides, along with plenty of good ol’ fashioned climbing. Below are four of the key rides, which link to my Strava profile for more detail. I also did one day in the Deer Valley Bike Park, but that’s not a great way to test automated suspension, as it just needs to be full Open.

1. Flying Dog Trail: This is a Park City classic and just happens to be right out my front door. The long version of the loop is about 18 miles and includes one big climb before the epic Flying Dog descent (which should be a downhill-only section, but that’s another story). As I was still getting used to the system, this wasn’t the best first impression. I struggled with the weight of the bike on the climb and couldn’t fully rail the descent for fear of a head-on collision. So the jury was still out. But one key takeaway was that Flight Attendant doesn’t offer maximum value on rides characterized by one big climb and one big descent. It’s not a big problem to manually switch suspension modes with this type of ride profile.

2. Wasatch Crest Trail: This is a bucket-list ride and is typically done as a shuttle up to Guardsman Pass with a final run into Canyons Village. It’s about 15 miles with 3,000+ feet of descending and 1,000 feet of climbing. This is where I first started to feel the true benefits of Flight Attendant. Through the rolling sections up top, which can get steep, I could hear and feel the suspension switching modes to suit the terrain. And when we got to the final section on Ricochet Trail (above), a proper downhill flow trail, it was ideal to have 170mm of travel with a massive 220mm front brake rotor, such that I could just let go of the brakes knowing that I had enough suspension and/or braking power for whatever lay ahead.

3. Park City Mountain Chair Lift: Unlike Deer Valley, Park City Mountain doesn’t have a proper bike park. But it does run one lift (Crescent) during the summer, which cuts out a big climb and gives one access to a huge network of trails above 8,000 feet. No matter how you slice it, though, there’s plenty of pedaling to be had and always nets out to a lot more descending. This is a sweet spot for Flight Attendant and the S-Works Enduro LTD, where the pedaling feels solid and even inspiring, but it’s really about going downhill. This was an epic day, and I can’t think of a better bike (or tech) to have for it.

4. Amasa Back & Captain Ahab: This is widely considered one of the best—if not the best—trails in Moab, according to many of the locals I asked. Moab’s trails are renowned for being highly technical and awe-inspiring. There’s very little flow. The descents require a lot of pedaling. Indeed, you’re pedaling most of the time in Moab, and you don’t go too far for the effort. An eight-mile ride in Moab is more like a 20-mile ride in Park City. And that’s what makes it ideal for Flight Attendant i.e. when taking your hand off the bar to manually adjust your suspension could literally be fatal on a trail like Captain Ahab. I absolutely welcomed the automation and didn’t for a second think about the weight. In fact, you wouldn’t want to ride Ahab with anything less than 160mm of travel.

Before riding Flight Attendant, I’d limited myself to riding a trail bike (140mm of travel) when the terrain was burly and a lot of pedaling was involved. Anything bigger just felt too inefficient. So the problem SRAM has solved with this new technology—the pain it has alleviated for me—is pedaling long-travel bikes on a variety of terrain. Putting the added weight aside, it can feel like pedaling an XC bike when it’s in the Lock mode. You feel all of the power going to the rear wheel. You can also manually “shift” to lock mode from the left shifter if you want to override the algorithm, say, for a paved section or pedaling out-of-the-saddle. I used this feature frequently but never opted to manually shift through the suspension modes. It does that perfectly on its own. Flight Attendant constantly gives you the ideal pedaling or descending platform based on a complex and tunable algorithm. So the 140mm trail bike has to go, and I’ll be riding a bigger, Flight Attendant-equipped bike going forward.