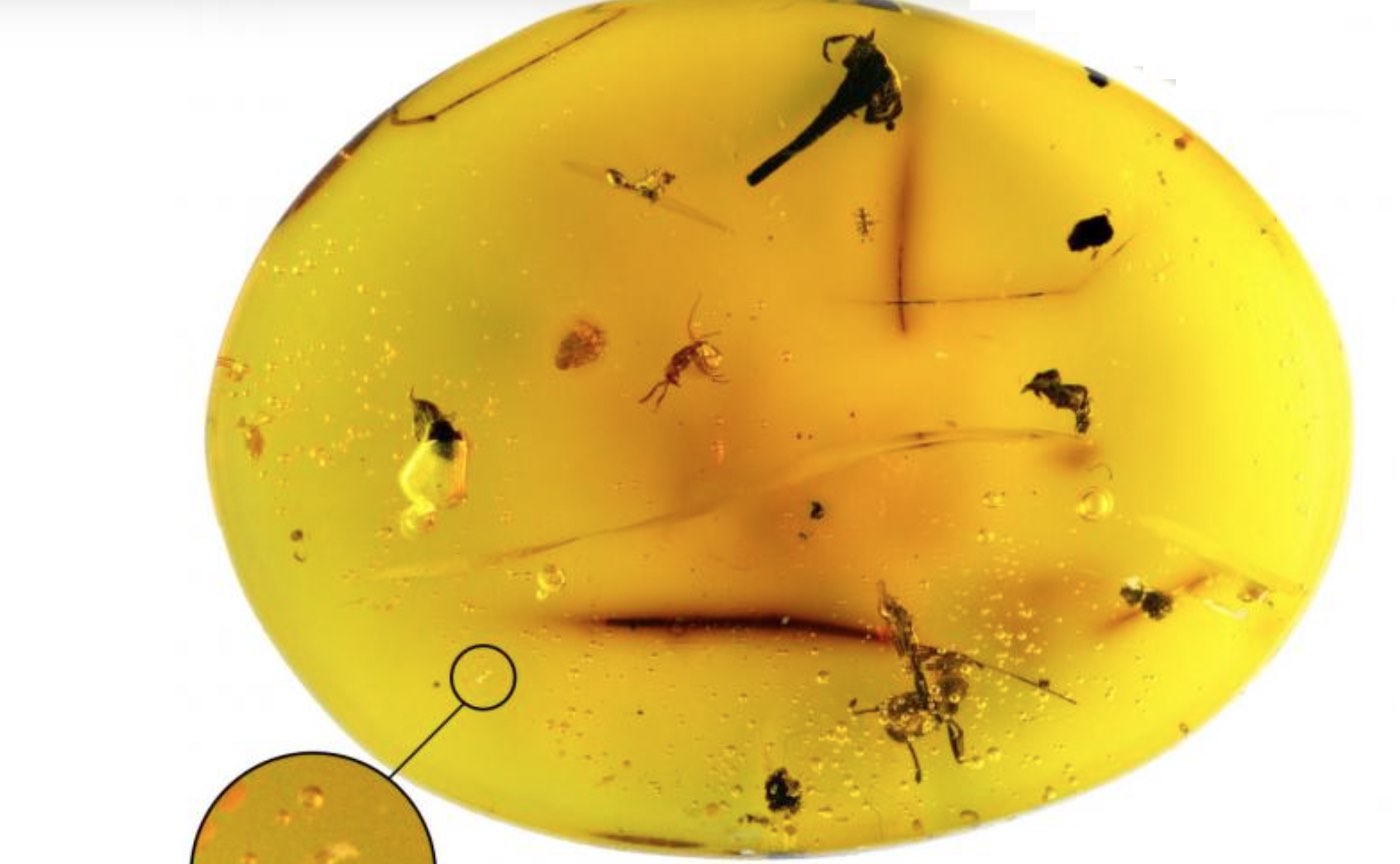 They’ve famously survived the vacuum of space, and even returned to life after being frozen for decades in Antarctic moss. But as hard as it is to kill the bizarre microscopic animal, the tardigrade, it’s harder to find one fossilized. In fact, only two have ever been discovered and formally named—until now.

Measured at just over half a millimeter, the specimen has been identified as a relative of the modern living tardigrade superfamily, Isohypsibioidea, and represents the first tardigrade fossil recovered from the Cenozoic, the current geological era beginning 66 million years ago.

Researchers say the pristine specimen is the best-imaged fossil tardigrade to date— capturing micron-level details of the eight-legged invertebrate’s mouthparts and needle-like claws 20-30 times finer than a human hair. The new fossil is deposited at the American Museum of Natural History Division of Invertebrate of Zoology.

“The discovery of a fossil tardigrade is truly a once-in-a-generation event,” said Phil Barden, senior author of the study and assistant professor of biology at New Jersey Institute of Technology. “What is so remarkable is that tardigrades are a ubiquitous ancient lineage that has seen it all on Earth, from the fall of the dinosaurs to the rise of terrestrial colonization of plants. Yet, they are like a ghost lineage for paleontologists with almost no fossil record. Finding any tardigrade fossil remains is an exciting moment where we can empirically see their progression through Earth history.”

“At first glance, this fossil appears similar to modern tardigrades due to its relatively simple external morphology,” said Marc A. Mapalo, lead author of the study and graduate student at Harvard’s Department of Organismic and Evolutionary Biology. “However, for the first time, we’ve visualized the internal anatomy of the foregut in a tardigrade fossil and found combinations of characters in this specimen that we don’t see in living organisms now. Not only does this allow us to place this tardigrade in a new genus, but we can now explore evolutionary changes this group of organisms experienced over millions of years.”

Tardigrades, or water bears, are renowned for their unusual appearance and self-preservation abilities—certain species are known to survive extreme conditions by curling into a dehydrated ball and entering a state of suspended animation where their metabolism is virtually paused, known as cryptobiosis.

Rare tardigrade fossil finds such as Pdo. chronocaribbeus, the team suggests, could provide new molecular estimates that offer fresh insight into major evolutionary events that have shaped the more than 1,300 species found across the planet today, such as the miniaturization of their body plan into one of Earth’s smallest-known animals with legs.

Perhaps the greatest challenge in unearthing tardigrade fossils, however, is their size.

“It’s a faint speck in amber,” said Barden. “In fact, Pdo. chronocaribbeus was originally an inclusion hidden in the corner of an amber piece with three different ant species that our lab had been studying, and it wasn’t spotted for months.”

RELATED: Astonishing Peek Into Travels of Mammoth 17,000 Years Ago: A Diary Written in Their Tusks

Barden says tardigrades’ microscopic non-biomineralized bodies are also uniquely suited to preservation in amber derived from plant resin, which is capable of safely enveloping and preserving organisms as minute as water bears and even individual bacterium.

“This particular mode of fossilization helps explain the patchy fossil record,” explained Barden. “Fossil amber with arthropods trapped inside is only known from 230 million years ago to the present… that’s less than half of the history of tardigrades.”

Placing the discovery on the Tardigrade Tree

While it is estimated that tardigrades diverged from other panarthropod lineages before the Cambrian 540 million years ago, only two definitive tardigrade fossils have formally been described, both from Cretaceous fossil deposits in North America.

“The fact that we had to rely on imaging techniques usually reserved for cellular and molecular biology shows how challenging it is to study fossil tardigrades,” said Javier Ortega-Hernandez, assistant professor of organismic and evolutionary biology at Harvard. “We hope that this work encourages colleagues to look more closely at their amber samples with similar techniques to better understand these cryptic organisms.”

The team’s analysis places Pdo. chronocaribbeus in one of three core classes of tardigrade, Eutardigadra, and makes it the first definitive fossil member of the superfamily called Isohypsibioidea—a diverse species that today inhabits aquatic and land environments and is typically characterized by their distinct claws that vary in size leg-to-leg.

The finding, published in Proceedings of the Royal Society B, also puts a minimum age on the Isohypsibioidea family.

“We are just scratching the surface when it comes to understanding living tardigrade communities, especially in places like the Caribbean where they’ve not been surveyed,” said Barden. “This study provides a reminder that, for as little as we may have in the way of tardigrade fossils, we also know very little about the living species on our planet today.”