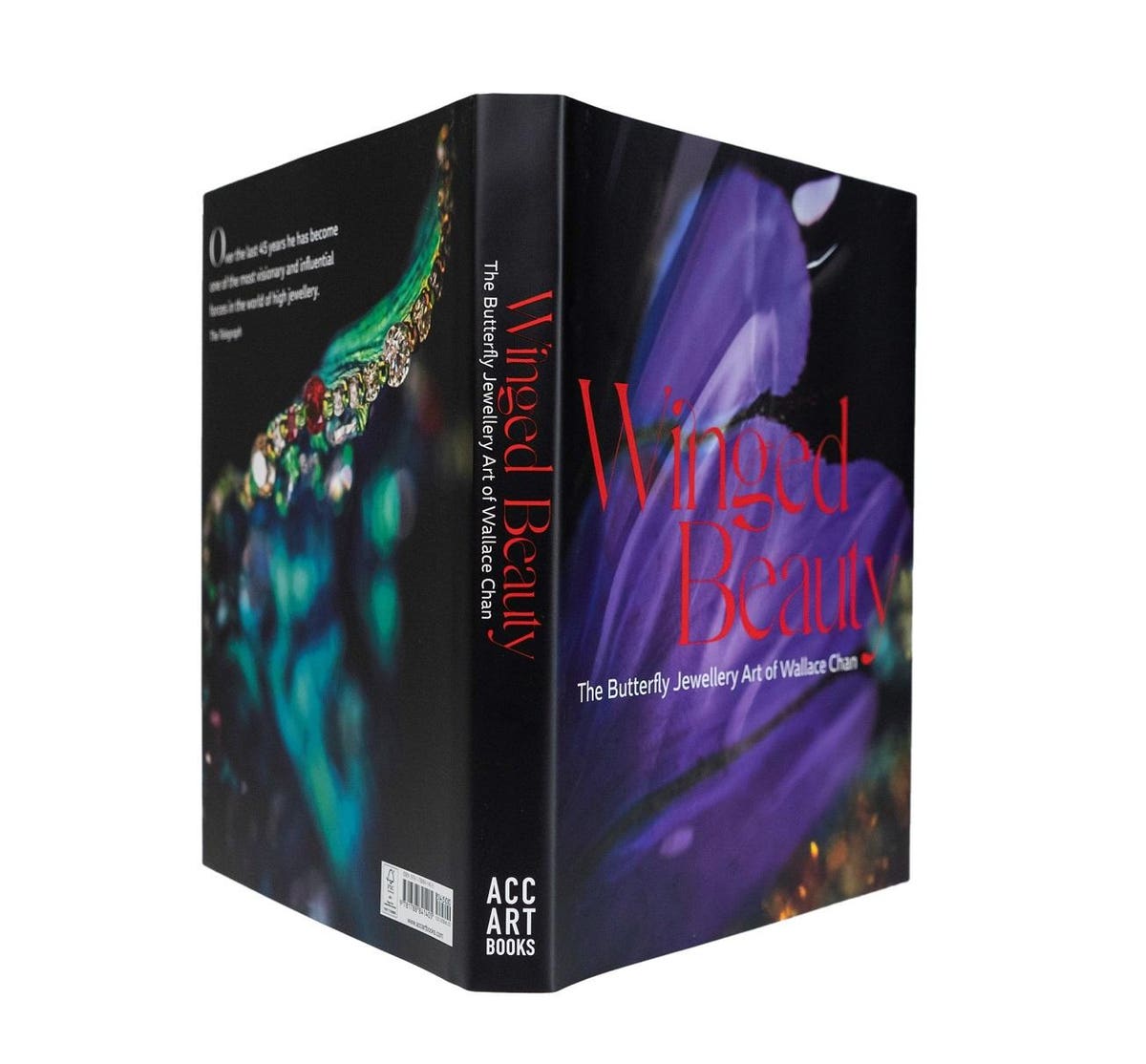 The butterfly as a motif for jewelry certainly isn’t a novel subject but few have elevated it to such a grand level as well as Wallace Chan. Now one of his favorite themes is the subject of a new book called Winged Beauty: The Butterfly Jewllery Art of Wallace Chan, published by ACC Art Books.

Winged Beauty is a study of one of Chan’s main motifs. The butterfly in practical terms presents itself as a palette for expression. It’s also a universal symbol of rebirth. The celebrated Hong Kong-based jewelry artist says in Chinese culture, it is one of the most recognized symbols of love and immortality. Just like in the west, the butterfly has been used throughout Chinese history in different art forms, including literature, music, painting and sculpture, as well as jewelry. Chan says he was “enveloped and nurtured” by traditional Chinese culture from a very young age and has called it his “spiritual hometown.” One of his favorite Chinese legends, the Butterfly Lovers, inspired him to create his “Fluttery” brooches, which capture the beauty and romance of butterflies. Chan has continued to be inspired by this motif.

“For a period of time, people knew me as the ‘Butterfly Man.’ The butterfly has meant a lot to me throughout my life,” Chan says. “When I was a young boy, butterflies were flying colors. As I grew older, I found them to be the embodiment of a great philosopher’s great philosophy – life is but a dream, only that we need to decide whether we want it to be the dream of a man, or the dream of a butterfly. I could not decide, so I became The Butterfly Man.”

The book, two years in the making, contains more than 100 images, including newly commissioned and previously unseen works. It features 50 pieces of Wallace Chan’s butterflies created over the years, from brooches and earrings, to necklaces and rings, elaborated with his personal and cultural memories on butterflies.

In addition, each chapter in the book is penned by a different jewelry expert, including jewelry historian, Vanessa Cron journalist and author, Ming Liu, jewelry curator at the Museum of Fine Arts in Boston, Emily Stoehrer, and lecturer and author, Juliet Weir-de La Rochefoucauld. The book begins with candid interview conducted by author and journalist, Melanie Grant.

Chan as a high jewelry artist has broken new ground in numerous ways during a career that began when he opened a gem carving studio in 1973 at the age of 16. In 1987, he invented the “Wallace Cut,” a fourfold reflection on a transparent stone from one carved face at the stone’s back. This established Chan as a master sculpture. In 2015, Hong Kong-based jewelry retailer, Chow Tai Fook, unveiled “A Heritage in Bloom” by Chan, created with 24 D-color internally flawless diamonds cut from the Cullinan Heritage, an exceptionally rare 507.55 carat. Although its price hasn’t been revealed, it is considered by some to be the world’s most expensive jewel.

More recently, he invented a porcelain five times as steel and he is currently working on a proprietary 24K gold with the hardness of 18K gold.

Winged Beauty is available at established booksellers for $45.