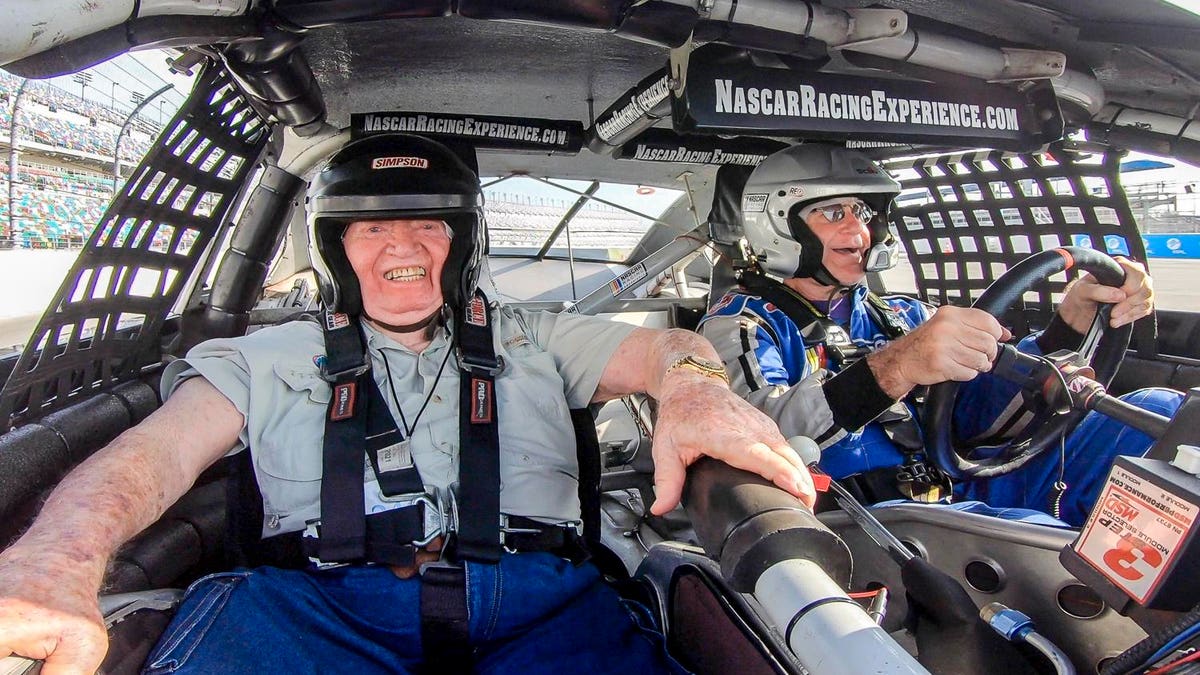 Joe Kittinger is not a household name. But if you mention him to aviation- and astronaut-types, they know who he is. In 1960, as research for NASA’s then-fledgling space program, he rode a helium balloon to 102,800 feet above the Earth, then jumped out, eclipsing 600 mph during his free-fall. His parachute opened at 14,000 feet, and he gently glided to the surface of the New Mexico desert.

Kittinger had just been the highest man in the world, at the edge of space, and, when he returned to Earth, he was almost as high. A telegram awaited him from seven Mercury astronauts, including the late John Glenn, congratulating him for his daring experiment. Kittinger had proved that test pilots and astronauts could eject at extreme altitudes, and survive.

Imagine my nervousness just before I was about to take him for a 170-mph thrill ride around the Daytona International Speedway, courtesy of the NASCAR Racing Experience. I had given similar rides to hundreds of other NRE customers, including two-time Daytona 500 winner Michael Waltrip and NHRA drag-racing superstar Antron Brown.

But Kittinger? The retired U.S. Air Force Colonel is a national treasure. There is a park near Orlando, Florida, named after him, which features an F-4 fighter jet he had flown on combat missions during the Vietnam War. Joe had been shot down in a similar F-4, and spent several months being tortured in the POW camp known as “The Hanoi Hilton.” Joe had ejected from his crippled aircraft at supersonic speed, and was lucky to be alive.

In full disclosure, I know Joe from a decade back. When I had originally interviewed him for Forbes, he had encouraged me to try a parachute jump. While proudly wearing his sneakers (I had big shoes to fill, pun intended!), I did my first tandem from 13,500 feet over Skydive DeLand, not far from Joe’s home in Altamonte Springs. We kept in touch over the years via The Explorers Club, in which we are both members.

As they strapped Joe into the passenger side of my 600-plus-horsepower stock car with five belts, a helmet and Hans device, I wondered what was going through his mind. Certainly, this ride would be small potatoes compared to the other things he had done during his life of 93 years. We would pull about 3 G’s on the 31-degree-banked, 2.5-mile-long Daytona oval. But Joe once told me he had pulled 15 G’s (15 times one’s body weight!) in a centrifuge for NASA experiments in the 1960s. 15 G’s? I couldn’t even imagine that kind of force. I once pulled 6 G’s in an F-15, and that was enough for me.

As I gunned the engine in pit lane, Joe gave me a fist bump, then I roared through the gears and blended onto the track just before Turn 1. Because of the engine noise and the focus I had on the road ahead of me, I couldn’t hear or see Joe, other than the occasional “thumbs up” in my right peripheral vision, and the time he reached over for a quick handshake on the back-straight. Really? This guy was fearless.

After seven hot laps, we returned to pit lane and I shut down the engine. I was apprehensive. Would this experience measure up to Joe’s expectations?

“Holy cow, that was really something,” he exclaimed. “I was Grand Marshall at the July Fourth Daytona race in 1973, and I got a ride-along then, but only at 100 mph. It was like kissing your sister. Riding with you was a real adventure. I loved it. You’re a great driver.” I actually think he meant it.

Right after, I took Joe’s son, Mark, out. Mark’s comment: “A redneck’s dream come true!” Now I’m not a redneck, and neither is Mark nor Joe. But I understood what he meant. Hey, we were down south in NASCAR country. What the heck!

We all had a good laugh. Then Joe and Mark made their way back to the parking lot. I stayed in the car giving rides for the rest of the day with a big grin on my face. How often do you get to give a true American hero something fun to remember in exchange for all he’s done for America?