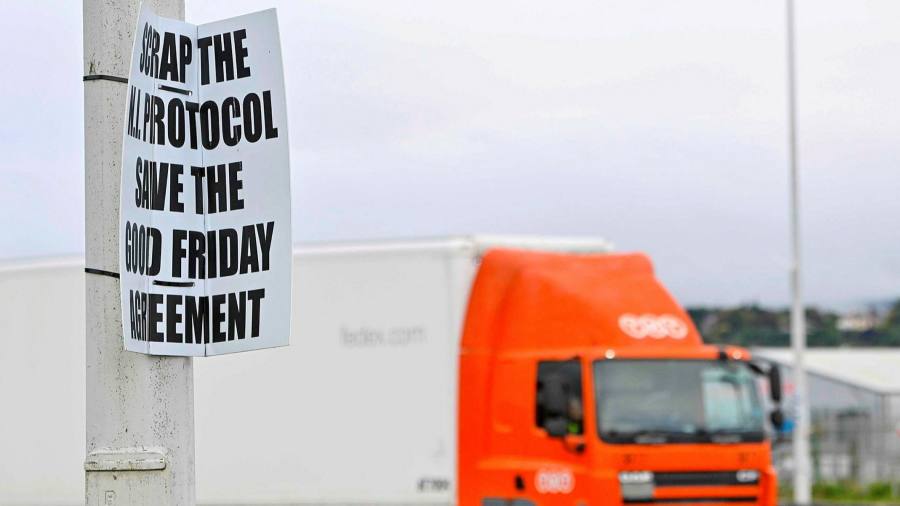 The UK government has a severe case of buyer’s remorse. Almost from the day it signed the Northern Ireland protocol that governs post-Brexit trade arrangements with the region, it has longed to renegotiate it. Downing Street’s determination to resolve real problems with the operation of an accord that is vital to preserve peace in the north of Ireland is legitimate. Yet binding international pacts cannot be ripped up or rewritten on one party’s whim. The solution must be to make the existing deal work, through constructive engagement by both sides.

Boris Johnson resurrected the idea of leaving Northern Ireland in the single market for goods as a last-ditch way to deliver a hard Brexit, while avoiding creating a hard border with the Irish Republic. By necessitating a regulatory border in the Irish Sea, this was always going to be tricky to make work.

Complicating any solution is the fact that Britain is now waging two battles. One is over whether the protocol is being implemented too heavy-handedly — gumming up goods flows from Britain and diluting unionists’ sense of British identity. The other is over the constitutional settlement with the EU that gave the European Court of Justice oversight of the protocol.

On the first front, the EU has made steps towards compromise, tilting towards the risk-based approach the UK favours, rather than its usual rules-based stance. Proposals from Maros Sefcovic, European Commission vice-president, could reduce customs and regulatory checks on the Irish Sea border by more than half. These will, though, require businesses in Britain to have detailed documentation available for electronic inspection. As a quid pro quo, the UK must provide more data and market surveillance so the EU can see goods are complying with its rules.

The UK, meanwhile, has hardened its line on the ECJ. Brexit minister Lord David Frost pre-empted Sefcovic’s proposals with a hawkish speech warning the EU would be making a “historic misjudgement” if it failed to rewrite the agreement. His amended text replaces the EU court with international arbitration. This reflects more the ideological preoccupations of Frost and fellow hard Brexiters with “sovereignty” than realities in Northern Ireland. The unionist community is more concerned with making the deal function than with who is the ultimate arbiter.

The Johnson government may have convinced itself that, as with the EU exit deal in 2019, only its hardball tactics have persuaded Brussels to bend, and pushing harder will make it bend further. London may believe it can go as far as triggering the partial suspension of the protocol — as Frost has threatened — opening the way to legal and trade sanctions if no resolution is found. Surely, after all, the EU would not want to retaliate in a way that could destabilise Northern Ireland.

Yet proceeding further towards confrontation would be a mistake. ECJ oversight over the 450m-strong single market is an EU article of faith. The more it believes Britain simply wants to blow up the protocol, the less willing Brussels will be to pursue useful talks. Wider EU relations could be poisoned. And in any trade dispute, the EU’s size will give it far greater leverage.

Most importantly, perhaps, one reason the UK chose a hard Brexit was to allow it to reach trade accords with others. Partners will shrink from making deals with a country they feel cannot be trusted to respect its commitments. Britain has made its point. The EU has taken steps towards it. “Landing zones” for agreement exist, even on who resolves disputes over the protocol. Now the two sides must get back to the table and thrash out a solution.