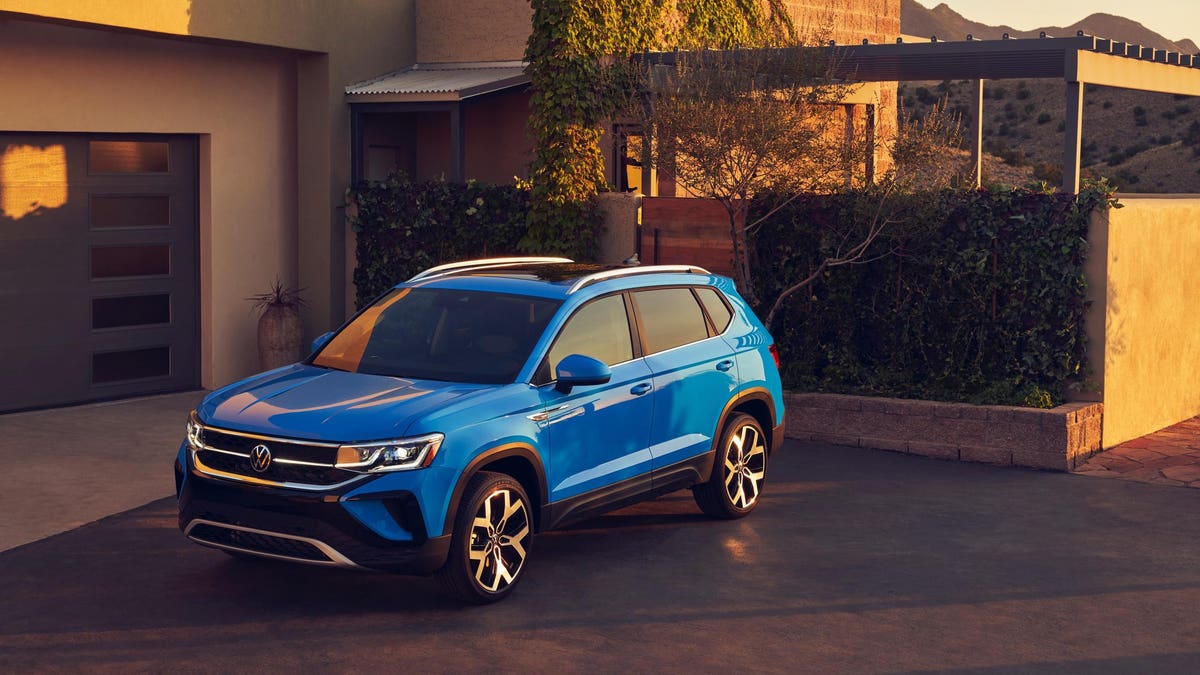 Volkswagen has been doing a great job impressing people with their latest SUV models, both gasoline and electric. The latest addition to the lineup is the subcompact Taos. It’s a little smaller than the Tiguan, competing with the likes of the Jeep Compass and Subaru Crosstrek for supremacy in the cut-throat market space of the subcompact crossover SUV. We tested the mid-level 2022 VW Taos SE, which is higher than the base “S” model but below the top-spec SEL.

Let’s start the review on a positive note, and that’s the exterior design. VW has taken their clean, modern exterior design language that have helped other SUVs in the range such as the Tiguan and Atlas gain appeal, and translated it beautifully into this subcompact crossover.

The front end features clean chrome lines around the grille, as well as a brushed metal finish on the bumper which looks sleek. The edges are a little more rounded compared to other VW SUV models, but the inclusion of a full LED light bar at the front, as well as chrome TAOS letter badging at the rear make a contemporary finish.

So it looks the part on the outside, but what is the interior like? The biggest plus of the 2022 Taos SE interior is undoubtedly the space. It’s positively cavernous! The back seat is surprisingly large and spacious for a subcompact-class SUV, and behind the rear seat you can also get up to 28 cubic feet of cargo and luggage in the AWD model, but that does go down to a (still good) 25 cubic feet if you opt for the FWD version.

The generous interior is mostly down to the equally generous exterior proportions of the 2022 Taos, including 72.5 inches of width, which is actually a little wider even than the larger-overall Tiguan.

The 2022 Taos starts at just $22,295 for the base model, and $27,245 for the SE model that we tested. It comes with a 1.5L turbocharged inline-4 engine outputting 158-hp and 184 lb-ft of torque. It’s not a bad thing to find such a pleasing specification with the VW brand for significantly under $30,000 before further additions. That works in the car’s favor, for sure.

Not everything is perfect, of course. The main downside for the 2022 VW Taos has to be the interior finish and quality. It’s a little disappointing when one considers the quality of the exterior finish. The two don’t quite line up, nor does the interior quality match the price, not when competitors like Mazda offer better for about the same money. These faults aside, it’s a fantastic new addition and will undoubtedly find a great market among VW and crossover fans.