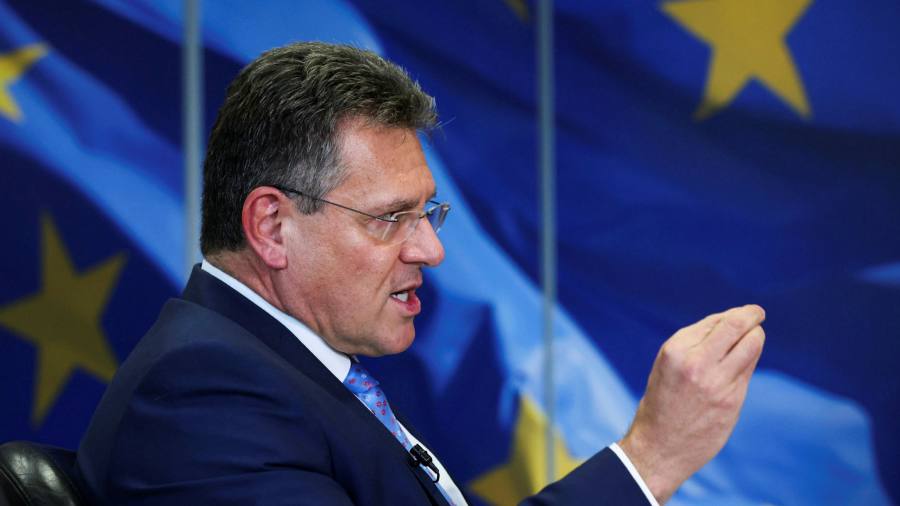 The EU on Wednesday proposed to sweep away most checks on goods crossing from Great Britain to Northern Ireland in an attempt to ensure smoother trade within the UK and end a protracted post-Brexit dispute with London.

But European Commission vice-president Maros Sefcovic warned the “far-reaching” offer to cut up to 80 per cent of checks on animal and plant-based products and halve the customs paperwork was the final chance to solve the problem, and required binding commitments from the UK.

“There will be no other package. This is it,” Sefcovic told the Financial Times. He said the commission’s proposals went “pretty far” to meeting UK concerns but he was willing to negotiate within the framework he had set out.

Some British officials said they were initially “taken aback” by the apparent scale of the EU offer and the “notable movement” made by Brussels to cut checks on goods, but they warned that the devil would be in the detail.

Big stumbling blocks remain. Lord David Frost, UK Brexit minister, insisted that any agreement must remove the European Court of Justice from its role in policing the Brexit deal in Northern Ireland, but did not call it a “red line”.

Frost said: “We’ve got a track record of reaching successful outcomes in negotiations despite predictions that we would not.”

Sefcovic said he hoped the two sides were in the “home stretch” for an agreement. He has invited Frost to Brussels on Friday for lunch to begin intensive talks and aims to clinch an accord by the end of the year.

UK prime minister Boris Johnson will now face pressure from business leaders in Northern Ireland to reach a compromise. Most business groups broadly welcomed the EU move and said the ECJ was rarely raised by members.

The commission’s proposals come in response to UK demands for a radical rewrite of the Northern Ireland protocol, the part of the UK-EU withdrawal agreement designed to avoid the return of a hard border on the island of Ireland. The protocol placed Northern Ireland in the EU single market for goods.

Under the commission’s proposals, lorries coming from Great Britain and supplying retailers in Northern Ireland could head through “express lanes” at ports. A lorry with 100 different food products would only need one certificate, instead of 100 as now.

Businesses in Northern Ireland importing products of animal origin such as eggs and cheese from Great Britain would be freed from some form-filling and an EU ban on chilled meats, such as sausages, would end.

The EU will also legislate to allow medicines from Great Britain to enter Northern Ireland.

However, Brussels remains wary that the region could provide a back door into the EU single market for produce that would normally pay tariffs or be banned.

So it is demanding that London tightens controls over the origin of food and labels such goods as UK only. EU officials would be able to audit and inspect importers and shops in Northern Ireland.

Keep up to date with the latest developments, post-Brexit, with original weekly insights from our public policy editor Peter Foster and senior FT writers. Sign up here

Sefcovic dismissed Frost’s demand that a joint arbitration panel should replace the ECJ as the arbiter of disputes, saying that without the court Northern Ireland could not stay in the EU single market.

Some UK government insiders believe that despite Brussels’ offer, Johnson will ultimately deliver on his threat to activate article 16 of the protocol to suspend some of its provisions, possibly triggering a trade war with the EU.

Stephen Kelly, chief executive of trade body Manufacturing NI, welcomed the commission’s proposals and described the ECJ issue as “a Brexit purity issue for the UK”. He said his members wanted frictionless access to the EU single market.

But Sir Jeffrey Donaldson, leader of the Democratic Unionist party, the largest group in Northern Ireland’s devolved government, said: “These proposals clearly fall a long way short of being the basis of a sustainable solution and are presented within the framework of a protocol that has failed.”

The FT has revamped Trade Secrets, its must-read daily briefing on the changing face of international trade and globalisation.

Sign up here to understand which countries, companies and technologies are shaping the new global economy.