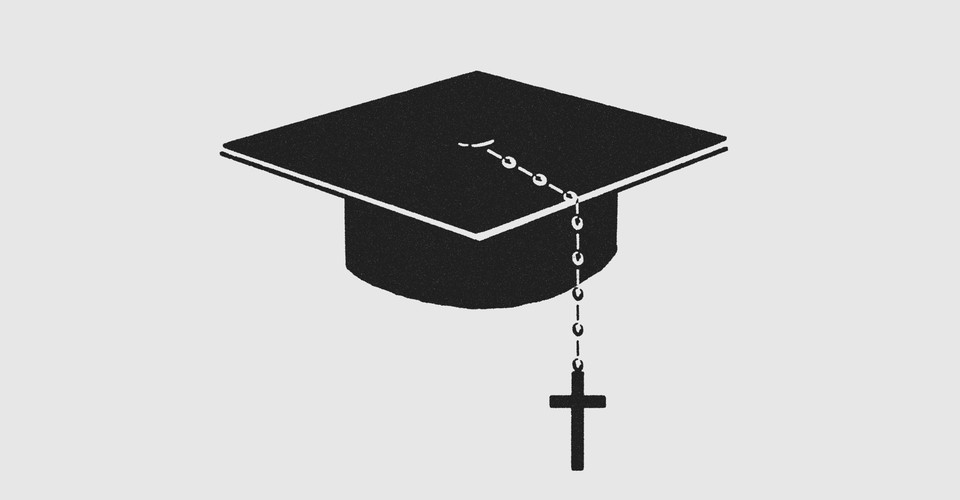 The Supreme Court’s upcoming abortion- and guns-rights cases are getting much of the attention right now, but a third, relatively overlooked case could transform one of the most consequential areas of American law: the separation of Church and state. If the plaintiffs win, states and municipalities could be required to use taxpayer dollars to supplement strands of private religious education that many Americans would find deeply offensive, including schools that exclude non-Christian or LGBTQ students, families, and teachers.

The case, Carson v. Makin, involves a challenge to the Maine Department of Education’s use of state tuition dollars to supplement “nonsectarian” schools. Under Maine’s constitution, the state legislature must require “towns to make suitable provision, at their own expense, for the support and maintenance of public schools.” But more than half of Maine’s 260 school districts—which it calls “administrative units”—do not have their own public schools. The Maine legislature passed a statute allowing those districts to either contract with established public schools or approved private schools in nearby districts to educate their children, or to “pay the tuition … at the public school or the approved private school of the parent’s choice.”

To qualify as an “approved private school” eligible for public tuition assistance, the law requires that the private school be “a nonsectarian school in accordance with the First Amendment of the United States Constitution.” The case boils down to a debate over the “nonsectarian” requirement, and whether the Constitution guarantees families a sectarian—or religious—option.

Read: Does religion have a place in public schools?

Two sets of parents whose children live in districts that operate no public secondary school selected the private, nonprofit Bangor Christian School “because the school’s worldview aligns with their sincerely held religious beliefs and because of the school’s high academic standards.” A third family chose a school called Temple Academy for similar reasons. None of the families actually sought public tuition for these schools, because, “they allege, given the ‘nonsectarian’ requirement, ‘such a request would be futile,’” according to a decision by the Court of Appeals for the First Circuit rejecting their constitutional claims.

The families nonetheless filed suit, claiming that Maine’s “nonsectarian” requirement violates a number of their constitutional rights, including their First Amendment right to the free exercise of religion. They lost in the lower courts, and the Supreme Court has now taken up the case for consideration.

During discovery, the parties stipulated that Bangor Christian School has a mission of “instilling a Biblical worldview” that is “completely intertwined” with the curriculum and identifies the Bible as its “final authority in all matters.” Under the school’s “high Biblical standards,” it declines to hire teachers who are gay or “identify as a gender other than on their original birth certificate.” Temple Academy likewise offers a “biblically-integrated education” and will not hire gay instructors. Moreover, neither school will accept public-tuition payments if doing so would require compliance with the Maine Human Rights Act, which bars discrimination in employment based on sexual orientation and gender identity. The schools concede that they would “consider” accepting public funding only if doing so would not force them to change their policy of discriminating against LGBTQ applicants in their faculty hiring policies.

As a threshold matter, the Court will have to decide whether the families have constitutional standing to sue. Their schools of choice are unwilling to participate in the funding in the first place, so a ruling in their favor would not redress any concrete injury, which is required to access the federal courts.

But the Court could decide that the lack of an opportunity to secure religious education for their kids at the state’s expense is sufficient injury to provide standing to sue, in which case the justices would turn to the case’s merits. Here is where things could go very awry. The text of the First Amendment—which prohibits the government from making any law “respecting an establishment of religion, or prohibiting the free exercise thereof”—offers no clear answers. (By its terms, it applies only to the federal government, but the Supreme Court extended it to the states under the Fourteenth Amendment.) At the most basic level, this language means that the government cannot establish a national Church. In colonial times, some people were required to pay religious taxes, attend an established church, and face punishment for dissent; by 1833, no state had an established religion. The First Amendment was designed to move us away from such systems. In doing so, it also inherently prohibited states from legislatively compelling church attendance or imposing religious taxes, dictating how a church worships, and giving particular church leaders governmental powers. It also forbids a state from picking and choosing which religions are eligible for government benefits based on non-secular—or faith-based—reasons.

Micah Schwartzman, Richard Schragger, and Nelson Tebbe: The separation of church and state is breaking down under Trump

Beyond that, as with much of the Constitution, the law is murky and somewhat capricious. The Supreme Court has toggled between the religious liberty of individuals of faith, on the one hand, and the broader interests of society as reflected in neutral laws, on the other. In 1878, the Court held in Reynolds v. United States that laws targeting polygamy by members of the Church of Jesus Christ of Latter-day Saints did not violate the free-exercise clause, as “laws are made for the government of actions, and while they cannot interfere with mere religious belief and opinions, they may with practices.” In Employment Division v. Smith, Justice Antonin Scalia wrote the majority opinion, which held that the free-exercise clause “does not relieve an individual of the obligation to comply with a valid and neutral law of general applicability on the ground that the law proscribes (or prescribes) conduct that his religion prescribes (or proscribes).”

Smith’s tolerance of religiously neutral laws is at risk with the newly minted 6–3 conservative majority. If the current Court determines that religious freedom supersedes the public good—even when it comes to neutral legislative bans on LGBTQ discrimination—we could see a slew of social-justice gains reversed on the theory that the Constitution somehow requires it.

The technical question in Carson comes down to whether the law is drawing a distinction based on the religious status of a school (which is not allowed under the Court’s current precedent) versus one made based on a school’s proposed use of public funding for religious purposes (presumptively okay). In other words, a state cannot refuse to use money in ways that benefit schools merely because those schools are religious, but it can refuse to provide funds that religious schools will then use for religious education.

In Zelman v. Simmons-Harris, for example, a 5–4 majority held in 2002 that Ohio had not violated the establishment clause in distributing tuition aid to low-income students attending both religious and nonreligious schools, because the “Ohio program is entirely neutral with respect to religion.” And in 2004, the Court in Locke v. Davey upheld a Washington State scholarship program that could not be used for programs aimed at teaching religious beliefs. A pastoral-ministries major at a private Christian college sued—and lost. Because “the State has merely chosen not to fund a distinct category of instruction,” the Court ruled, the program was neutral toward religion and thus was constitutional.

Since Locke, Justices John Roberts, Samuel Alito, Sonia Sotomayor, Elena Kagan, Neil Gorsuch, Brett Kavanaugh, and Amy Coney Barrett have joined the high Court, and the trajectory of rulings has swung in favor of individual religious freedom. Shortly after Gorsuch’s confirmation, in 2017, the Court decided Trinity Lutheran Church of Columbia, Inc. v. Comer, holding that the First Amendment’s free-exercise clause forbids Missouri from disqualifying churches and other religious organizations that house day-care centers from receiving state grants under a playground-resurfacing program. It applied the strictest scrutiny to the program, reasoning that the program’s distinctions were based “solely” on the religious “character” of a recipient.

Then, in 2020, a 5–4 panel that included Kavanaugh concluded in Espinoza v. Montana Department of Revenue that a state tax-credit program violated the free-exercise clause because it benefited only individuals who donated to organizations that awarded scholarships to nonsectarian schools. Donations to organizations that funded scholarships to schools controlled by a “church, sect, or denomination” were not eligible for the tax credit, a feature that a majority found unconstitutional.

The pairing of Trinity Lutheran and Espinoza provided an opening for the plaintiffs’ challenge to the Maine law in Carson. The parents argue outright that the Locke Court was wrong to distinguish between “use” and “status” when it comes to government funding of religion, and that the precedent should be overruled. “There is no basis for such a distinction,” they claim, as “the Framers chose to protect religious ‘exercise,’ as opposed to mere belief or conscience, to ensure that Americans would be free to live out their faith.”

For its part, Maine asserts that it is willing to provide “an education comparable to the education students would receive if their community operated a public school”—which does not entail “explicitly religious activity”—and that its program thus has nothing to do with religious status. The goal is to simulate religiously neutral public-school education for children in districts that do not have their own secondary public schools.

The Washington Post opinion columnist George Will has criticized that position as allowing the state to “disqualify a religious school that takes its status too seriously,” and inviting government officials to conduct “intrusive investigation of the school’s religiosity.” For Will, “status and usages are inseparable,” as demonstrated by Maine’s tolerance for schools that teach “‘spiritual values’ that are ‘universal’”—just not those arising from a “particular religious tradition.”

Will’s point, though valid, may be overblown. Undoubtedly, there are some commonsense boundaries here that would reasonably function to recognize the First Amendment interests of taxpayers who do not want their money supporting particular strands of religious education. At Bangor Christian School, an objective for fifth-grade social-studies students is to “recognize God as Creator of the world”; ninth graders are taught to “refute the teachings of the Islamic religion with the truth of God’s Word.” Each teacher must affirm that “he/she is a ‘Born Again’ Christian who knows the Lord Jesus Christ as Savior,” and “must be an active, tithing member of a Bible believing church.” Teachers at Temple Academy are contractually obliged to acknowledge that “God recognize[s] homosexuals and other deviants as perverted” and that “deviation from Scriptural standards is grounds for termination.” It won’t admit children who identify as gay or who come “from homes with serious differences with the school’s biblical basis.”

As Will concedes, the Supreme Court has long acknowledged that the First Amendment staves off “excessive government entanglement with religion.” The mountain of case law and legal tests produced under the auspices of the amendment’s sparse text underscores that there is no obvious, black-and-white answer to whether the Constitution recognizes a parental “right” to obtain a taxpayer-funded religious education if nonsectarian schools are eligible. If a fractured Court winds up mandating the use of public education funds to teach “a thoroughly Christian and Biblical world view” under these circumstances, the obliteration of America’s long-standing separation of Church and state has begun.