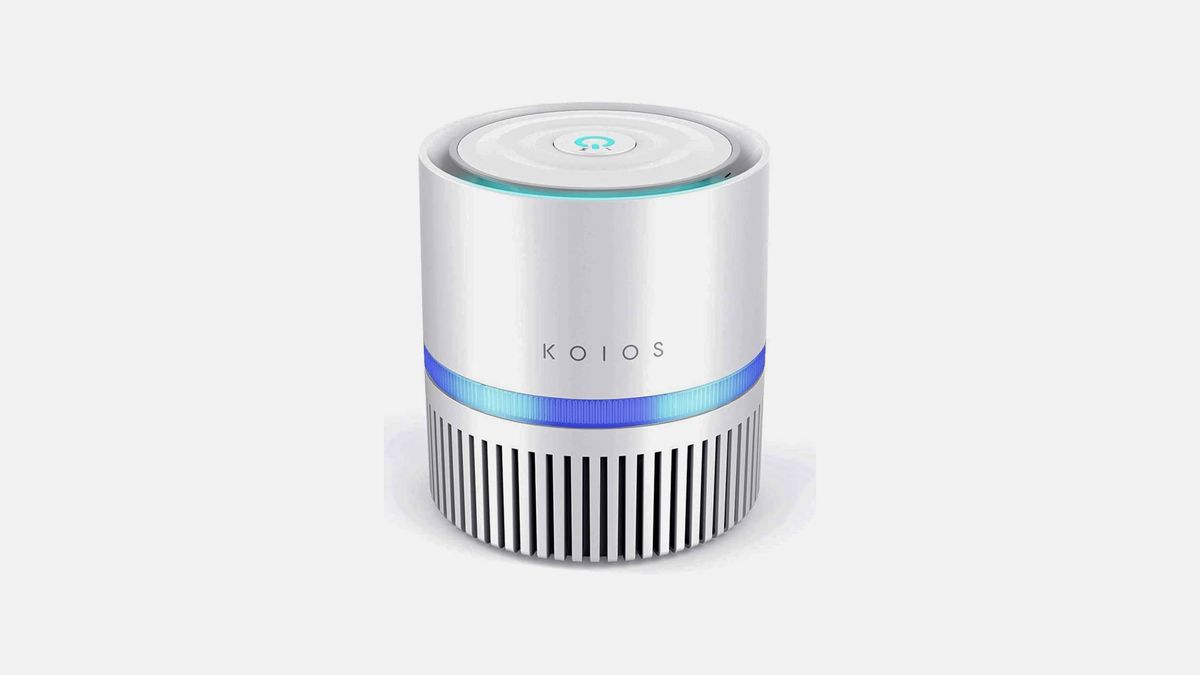 In this KOIOS EPI810 review, we’ll be taking a closer look at this compact air purifier, from checking its performance in a family home, to looking at how other users rate theirs

We’ve reviewed a range of air purifiers, from hi-tech purifiers with dedicated apps and Smart technology to more basic but affordable options. So, if the KOIOS EPI810 doesn’t have what you’re looking for, check out our guide to the best air purifiers and find one to suit you.

Around 50dB, even at highest setting

Small enough to sit on a desktop

Easy to operate straight out of the box

Featuring a True HEPA 3-stage filtration system and an activated carbon filter, the KOIOS EPI810 should be able to absorb around 99.97% of dust, pollen, mold, bacteria, and other particles bigger than 0.3 microns. It also comes with a 1-year warranty.

At about the size of a 1-gallon can of paint, the KOIOS EPI810 is the most compact air purifier we’ve reviewed. It’s small enough to sit comfortably on any office desk or shelf. Weighing in at less than 2.5 lbs, it’s also light enough to take traveling.

The KOIOS EPI810 covers areas of up to 269 square feet, so it may be more suitable for homes with small-to-medium-sized rooms.

The KOIOS EPI810 works straight out of the box, as the filter is already fitted. Simply plug in the appliance and switch on using the single power button on the top. The same button allows users to switch between the two fan speeds and power off the nightlight if desired.

Users can operate the purifier via a mains socket or run it off their laptop via a USB cable. However, we found that the fan speed was reduced when operating via USB, so this extra feature seems largely redundant.

The KOIOS EPI810 features a True HEPA H13 filter, which means it should remove at least 99.97% of airborne particles. In our at-home trials, we measured ambient air quality before and after use of the purifier for 30 minutes, alongside a match smoke test and an incense smoke test for the same duration.

Finally, our incense smoke test evaluated how well the purifier performed after burning five incense cones simultaneously and found mixed results. While the KOIOS EPI810 absorbed an impressive 99% of particles measuring 10 microns, it only absorbed 52% of particles smaller than 2.5 microns.

Based on our at-home tests, results showed that the KOIOS EPI810 fell far beneath below the 99.97% absorption expected from a H13 True HEPA filter across all particles. However, running the air purifier for longer than our limited 30-minute tests may yield better results for users.

The KOIOS EPI810 has got to be one of the easiest to operate air purifiers we tested, while its small size and weight make it easy to move the air purifier from room to room or even take on vacation or business trips.

The bonus feature of a night light makes the KOIOS EPI810 a good air purifier for a nursery or child’s bedroom. The night light can be switched off by holding the power button down for four seconds, although this information is easy to miss in the manual, hence some negative reviews on Amazon (see our User Reviews section below).

KOIOS EPI810 review: What’s not so good about it?

The KOIOS EPI810’s simplicity means that it lacks the functionality of more expensive air purifiers, such as scheduling the purifier to switch on and off at pre-programmed times or being able to view its performance on a smart app or LCD display.

Unfortunately, the KOIOS EPI810 didn’t live up to our expectations during our at-home tests. It almost always fell below the 99.97% expected from a device with an H13 HEPA filter and was the poorest performer in tests than every other air purifier.

The KOIOS EPI810 scores an impressive 4.5 stars out of five on Amazon.com. Users who gave it the full five stars praise the purifier’s performance as well as its conveniently compact size. Others rate its ability to neutralize unpleasant cooking odors and pet smells. Many reviewers have bought several purifiers to use in multiple rooms.

Negative reviews point out that the purifier can be noisy at its highest setting, or that they have been unable to switch the night light setting off. Others criticize the quality of the unit as having a ‘cheap’ feel and say the replacement filters are too expensive, at almost half the price of the base unit.

Should you buy the KOIOS EPI810?

If you’re looking for something more powerful and with the bonus of smart controls, why not try the Levoit 400S, perfect for the modern connected home.