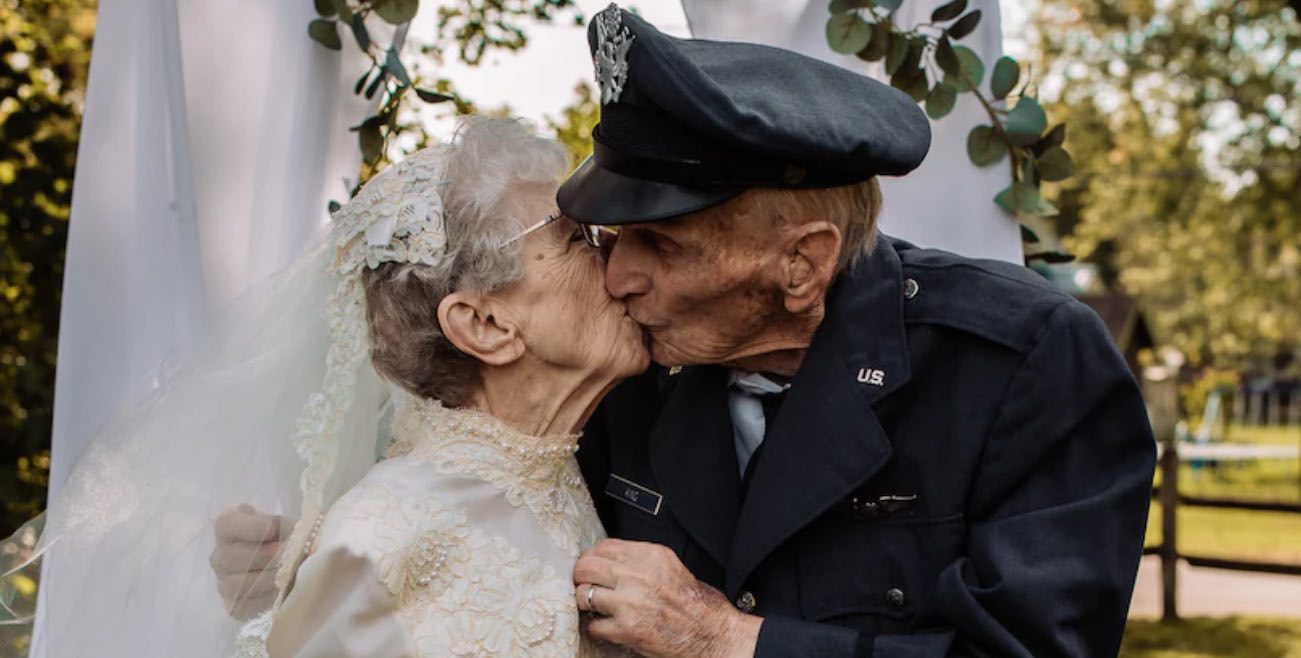 The bride is 97. The groom is 98. The couple has been married for 77 years, and thanks to some very special folks who helped them celebrate their recent anniversary, they were finally treated to some very special wedding memories they missed out on all those years ago.

The Kings have become like family to the staff of the St. Croix Hospice who serve as caretakers for the elderly pair in their Oelwein, Idaho home. With a big anniversary coming up, their caregivers wanted to do something special to commemorate the occasion—and knowing something of the couple’s history, they came up with a perfect plan.

When Frankie and Royce King took their vows on September 16, 1944, the world was a very different place. America and its allies were steadfastly battling the Axis Powers as World War II dragged on.  Royce was in the U.S. Air Force awaiting final orders to ship out, but before he was deployed overseas, he and his high school sweetheart, Frankie, were determined to take their vows.

The simple church ceremony was small and no-frills. Rather than a lace gown, Frankie wore a suit.

There was no photographer on hand to record the vows.

Two days later, Royce was on his way to take up duties as a carrier pilot with a regular flight path that took him over the Himalayas.

What Frankie and Royce’s wedding lacked in splendor, their life together has more than made up for. Two kids, four grandkids, and several great-grandkids later, the Kings’ marriage is still going strong.

The love they share with each other is something that’s only rivaled by the kindness they’ve spent a lifetime spreading throughout their community.

For the anniversary festivities, the St. Croix crew pulled out all the stops. As one staff member played Big-Band era tunes on his sax and another snapped photo upon photo, Frankie, garbed in a lovely 1940s-era wedding gown and a brand-new ’do, was led through a flower-covered archway to where Royce, in full Air Force uniform, awaited her.

By the time the three-tiered wedding cake was served, there wasn’t a dry eye in the house.

“Absolutely no shame in the fact that I had a hard time keeping it together behind the lens,” photographer Hilary Michelson posted to Facebook. “I work for St. Croix Hospice full-time while doing photography on the side. I am passionate about both of my jobs and it made my heart so incredibly full to see them intertwined last week.”

The Kings’ daughter, Sue Bilodeau, who was on hand to help her parents celebrate is now putting together a photo album of cherished memories for them. “It was definitely one of the most special things ever,” she told The Washington Post. “When Mom mentioned she didn’t have time to plan a big wedding and didn’t have a photographer, the St. Croix staff members worked together to make sure they could get their special day.”

MORE: Watch Photographer Stumble Onto Sunset Marriage Proposal and Excitedly Give Amazing Pics to the Couple

For anyone who doesn’t believe true love can last a lifetime, Bilodeau says they only have to look to the example set by parents to be proved wrong. As she told the Post, “Together they demonstrate that a great love takes kindness and perseverance.”

And if that doesn’t convince them, the pictures are worth a thousand words—and then some.

SHARE This Story With All the Romantics in Your Life…