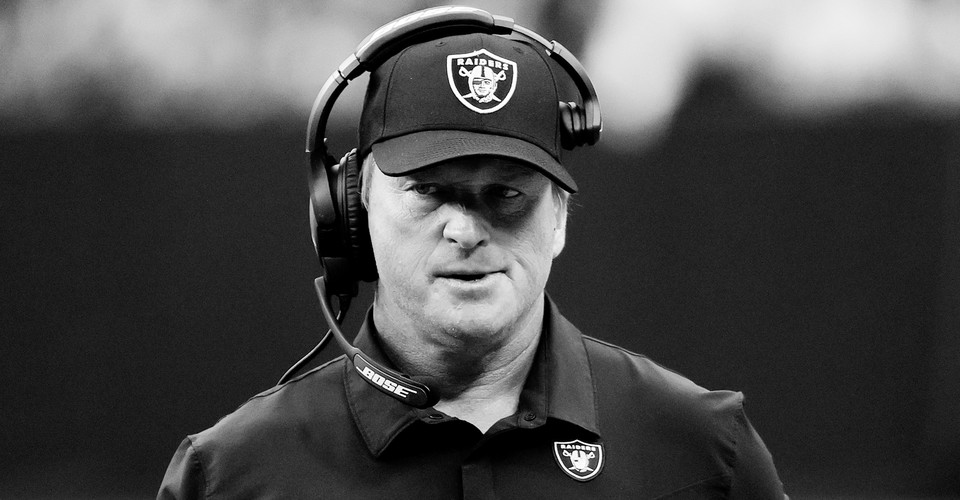 Jon Gruden’s resignation as head coach of the Las Vegas Raiders is just the beginning of a long-overdue reckoning for the NFL, and it underscores the basic problem: The NFL is full of Jon Grudens.

Gruden made racist, homophobic, and misogynistic comments in emails for nearly a decade, but he was forced out only when some of those reprehensible statements became public. Last week, The Wall Street Journal reported that in a 2011 email to the former Washington Football Team general manager Bruce Allen, Gruden referred to DeMaurice Smith, the executive director of the NFL Players Association, as “Dumboriss Smith” and said that Smith, who is Black, had lips the size of Michelin tires.

And then on Monday, The New York Times dropped more bombshells, reporting that, in other messages to Allen over the course of seven years, Gruden called NFL Commissioner Roger Goodell a homophobic slur; opposed the presence of gay players in the NFL; exchanged pictures of nearly naked women, including Washington cheerleaders; mocked the league for having women referees; and railed against players who protested during the national anthem. Gruden was an ESPN analyst during the period when he sent the messages, which ended in 2018—the year the Raiders hired him back as head coach. (He had previously coached the team from 1998 to 2001.)

Read: The NFL’s most valued cause is itself

After his true feelings about Smith surfaced, Gruden proclaimed, “I never had a blade of racism in me.” Turns out, Gruden had a football field’s worth of racism, sexism, and homophobia in him that had yet to be exposed.

Now fans are left to wonder how Gruden’s views influenced how he operated as a head coach, both with the Raiders and when he was with the Tampa Bay Buccaneers, from 2002 to 2009. Most NFL players are Black. Gruden has held positions that not only required him to interact intimately with players, but also gave him a big role in deciding their futures. He also coached the Raiders defensive lineman Carl Nassib, the first active NFL player to publicly come out as gay. People in marginalized groups commonly find themselves in this precarious and frightening scenario: Their fate is being determined by someone who disrespects and dehumanizes them.

The most disturbing aspect of this scandal is that, in the NFL, Gruden’s mentality isn’t an anomaly.

Gruden’s emails came to light as part of a larger investigation into the Washington Football Team’s culture. Last year, several women came forward in The Washington Post to detail how sexual harassment and other forms of misogyny were prevalent within the organization.

The NFL opened its own investigation to look into the allegations, and the results were far from transparent or satisfactory. The NFL fined Washington $10 million, but unlike in other league investigations, such as that into Deflategate, the league refused to publicly release any written materials related to its findings. Dan Snyder, the team’s owner, also handed over day-to-day operations of the team to his wife, Tanya, and agreed that they and other team executives would take part in workplace-conduct training.

Read: When your hometown team gets a new identity

Once Gruden’s emails to Allen surfaced, according to the Times, Goodell told league executives to examine more than 650,000 emails from the past few months, likely because even Goodell knows that Gruden’s narrow-minded views are held by many more coaches, owners, and team executives.

The NFL Players Association has urged the league to release the emails, but that request seems unlikely to be granted, because the NFL promised confidentiality when it began its investigation.

Besides, the image-conscious NFL has no interest in the public knowing the depth of prejudice that exists in the league, even though the NFL has proved quite clearly that it’s neither progressive nor inclusive. The NFL has had one Black team president in its 101-year existence. Currently, the league has three Black head coaches, and it has never had a majority owner who is Black.

The NFL has sent the message repeatedly that it is more comfortable with Black people as laborers, rather than leaders. Gruden could find an NFL team to hand him $100 million; the players Colin Kaepernick and Eric Reid, in contrast, both suffered professionally because they knelt during the national anthem in order to make people more aware of racial injustice and oppression. Urban Meyer, another coach in the hot seat in the past week, hired Chris Doyle as the Jacksonville Jaguars’ strength coach—even after numerous players for the University of Iowa, Doyle’s former employer, described a pattern of racially offensive comments. (Meyer changed his mind after an outcry.) Meanwhile, teams refuse to give head-coaching jobs to Byron Leftwich and Eric Bieniemy, Black offensive coordinators who have won Super Bowls for their respective teams, Tampa Bay and Kansas City.

Jemele Hill: ‘Some team has to want me’

Kaepernick and Reid sued the NFL, accusing teams of colluding to keep them from playing. One reason the NFL settled that case was that doing so would keep NFL owners’ depositions and other evidence from becoming public. If Gruden was so comfortable making vile comments in writing to an NFL team executive, imagine what NFL owners, coaches, and other officials were saying behind closed doors about Kaepernick, Reid, and other Black players who chose to be just as outspoken.

The NFL does a fantastic job of covering for its lack of progressiveness. In 2014, the league reportedly cut a deal with the Rams that in exchange for drafting Michael Sam—the first openly gay player drafted in pro football—the team would not have to appear on the NFL’s HBO show, Hard Knocks, which follows a different team every year in training camp. Many teams view the show as a distraction; for the league, a chance to avoid taking part in it was a carrot to dangle when officials didn’t want to explain why not one single team would take a chance on drafting an openly gay player. (The Rams’ then-coach, Jeff Fisher, strongly denies any deal with the NFL.)

Notwithstanding the occasional polite, performative gesture, the culture of football won’t improve as long as people like Gruden are elevated, protected, and prioritized in the NFL’s hierarchy. Now that his emails have become public, Gruden makes a convenient sacrificial lamb, but his departure doesn’t change the bigger picture.

No matter how many social-justice slogans the NFL stencils in its end zones or allows players to put on their helmets, no matter how many prominent Black artists the league hires to perform during its Super Bowl halftime show, no matter how much money the NFL gives to anti-prejudice organizations, it will never fix its own corrosive, institutionalized racism without more fundamental change. Unless the league chooses to confront prejudice in substantive ways, bigots will continue to protect bigots, and power will continue to protect power.