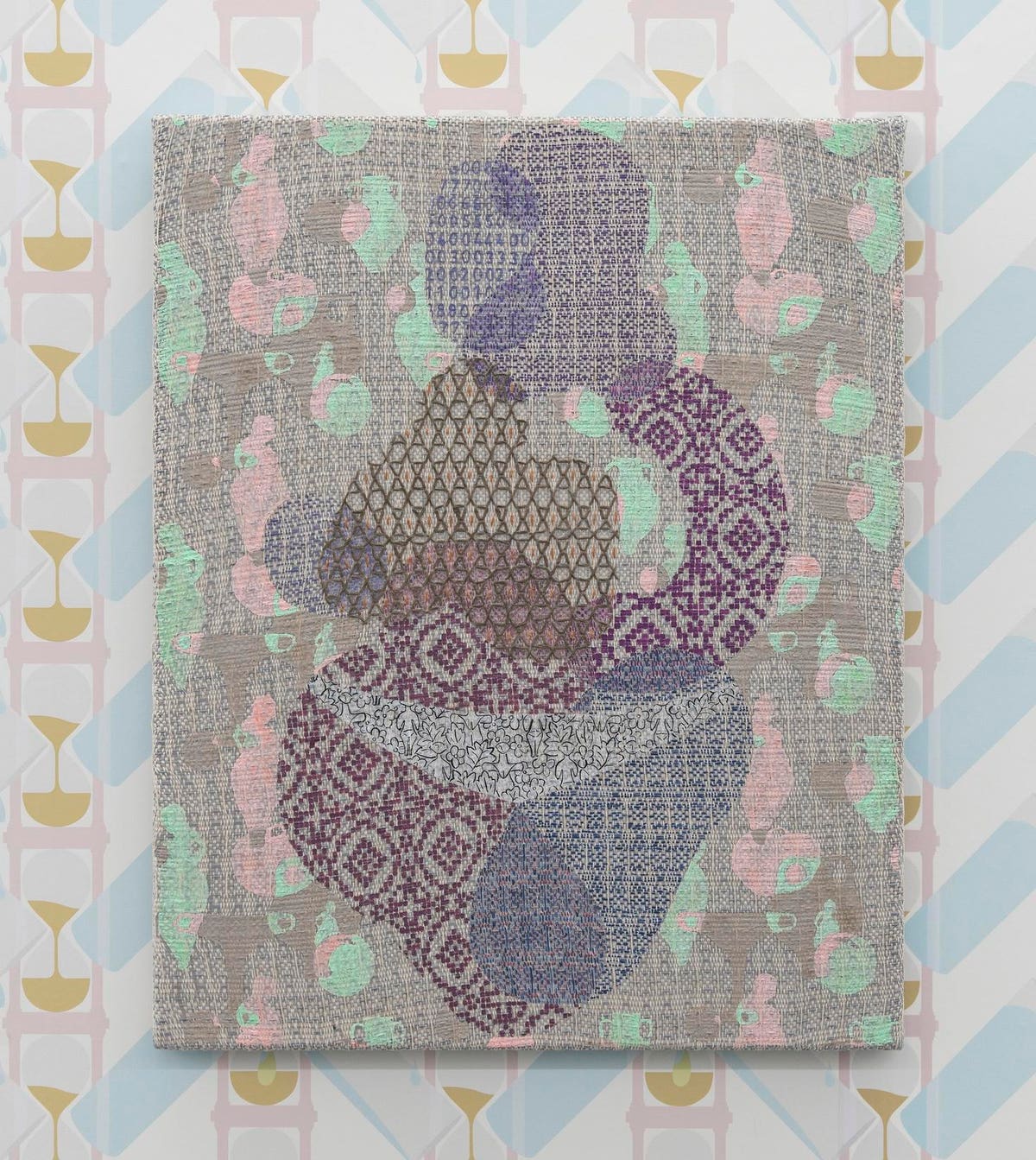 The artist duo, Barrow Parke, acknowledge that the mediums they work in — weaving and wallpaper, for example — have long been associated with women’s work. “People have always brought up gender because we work with textiles,” says Mark Barrow, who practices along with his wife, Sarah Parke.

In Woman, an exhibition of their work currently open at JDJ gallery’s new location in Tribeca through October 30, the duo decided to directly address the gendered aspects of their craft. “We decided we were going to make women, but it’s such an art trope, it’s been done so much,” says Barrow.

Rather than say something new — or even worse, completely wrong — about women, Barrow Parke decided to turn to ancient fertility figures as a source of inspiration. Depicting voluptuous, curvy women, and best epitomized by the Venus of Willendorf, new evidence has emerged suggesting that fertility figures were made — and worn — by women during the last Ice Age. The figures, laden with healthy fat, were seen as representing the ideal body type for maintaining a healthy pregnancy and staying alive during times of intense food shortages.

For Parke, who shares two children with Barrow, the figures also represent the genesis of life. “They are the start of everything,” she says. Women, of course, bear children. But the traditionally “female” art of weaving was also used as inspiration for the binary code on the first personal computers created by IBM in 1944. The same sort of punch card that fed patterns into a mechanical loom also fed instructions into the programs on the computers. Knowledge itself — or knowledge as we catalogue it today — can thus be connected back to weaving, and more obliquely, to women.

For the exhibition, Barrow and Parke drew curvy figures of women on a tablet, and then used these rudimentary drawings to create both paintings and weavings that meld together patterns to create forms that resemble the rounded, exaggerated curves of ancient fertility statues. The weavings and drawings are hung on wallpaper also designed by the duo. The patterns for the wallpaper take inspiration from words — one could argue derogatory words — used to describe women. For example, a pattern that looks like clusters of strawberries hanging on a vine actually contains tiny bombs and is named after “bombshells.” And a pale pink, blue and mustard pattern that has the characteristics of herringbone, and contains glasses of water as well as hourglasses, is named after the phrase “a tall glass of water.”

Barrow Parke describe their partnership — and the resulting process — as similar to parenthood. “Having a joint practice, really, you have to surrender something,” says Barrow. “Once you have a kid, there is this thing that you have to care about more than yourself, and our practice is sort of similar to that.”

Parke notes that she thinks less about Barrow being male, and more about the things they want to explore together in their practice. “I don’t know how anyone does anything on their own at this point,” she says. “We can’t accomplish anything unless we are in it together.”

This is the recipe for success in a marriage — or any other sort of partnership. But in terms of making art under the rubric of “woman,” one wishes that the partnership was a little more dysfunctional. The work in the exhibition is considerate to the point of being passive, even as it combines images of fat women with the concept of “bombshells.” Like it or not, no one wonders what De Kooning thinks about women after looking at his similarly titled series of six “Woman” paintings. (Hint: he hates them.)

The exhibition at JDJ Tribeca is being held concurrently with “Dangerous Pattern,” a group exhibition curated by Barrow and Parke, and held at the Ice House in Garrison through November 12. The exhibition features the work of five women painters including Caitlin Keogh, Lucia Love, Nikki Maloof, Emily Mullin and Ruby Sky Stiler combined with drawings and wallpaper by Barrow Parke, and argues that the decorative arts, the product of female intellect, is a tool of seduction more than sexuality.