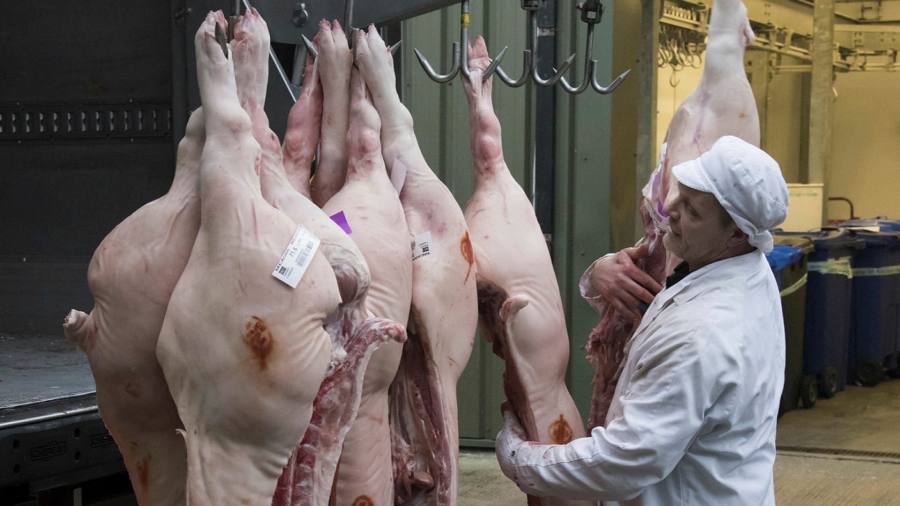 The UK government has acceded to pressure from farmers warning about a mass cull of pigs because of a labour shortage and given the go-ahead for 800 foreign butchers to come and work in Britain on seasonal visas.

Farmers had warned that 10,000 pigs might have to be destroyed every week because of a shortage of workers at industrial slaughterhouses, with some running a quarter below normal capacity.

They have already slaughtered hundreds of animals to avoid breaking regulations on allotted space after a build-up of at least 120,000 surplus beasts on farms because of the butcher shortage, the National Pig Association said last week.

Defra, the environment department, announced on Thursday that the 800 workers would be allowed into the country until December 31 through an extension of the seasonal workers pilot scheme and be able to work for up to six months.

The government will also start a state-funded “private storage aid” scheme for pig carcasses to be kept until they are able to be butchered. Pig farmers had pushed for the scheme to be used to relieve pressure on the industry.

Meanwhile the Agriculture and Horticulture Development Board and Quality Meat Scotland will for the month of November drop a levy on pork products which the government estimates will save the sector £1m.

However ministers rejected industry calls for the government to drop a requirement for butchers in Britain to be able to speak English.

Defra said one reason for the surplus of pigs was because of a 20 per cent drop in pork sales to China, leaving a larger number for domestic consumption.

George Eustice, environment secretary, said the emergency measures were needed because of “a unique range of pressures on the pig sector over recent months such as the effects of the pandemic and its effect on export markets”.

The action was “the result of close working with industry to understand how we can support them through this challenging time”, he added.

Defra also stressed that the government “expects the pork sector to encourage better training offers, career options and wage increases to ensure that the sector draws on the large domestic labour pool in the UK, as well as investing in technology across the industry”.

Nick Allen, chief executive of the British Meat Processors Association said the visas would help to ease the pig situation, depending on how quickly new workers could arrive.

“This announcement must be viewed against a background of a need for 12,000-15,000 skilled workers. So 800 is a long way from that,” he added. “Even so, the crisis in the pig sector is desperate and this will give some of those struggling farmers some hope.”

The NPA said it was “very relieved” the government had finally come up with measures aimed at reducing the backlog on farms.

“We are working with the processors to understand the impact of these new measures and to determine exactly what will happen now, and how quickly, so that we can give pig farmers some hope and stem the flow of healthy pigs currently having to be culled on farms,” it added.

At the same time the transport department plans to loosen “cabotage” rules that limit the journeys EU drivers can make while in the UK.

The proposals set out in a consultation launched on Thursday mean foreign operators that come into the country laden with goods will be able to pick up and drop off goods an unlimited number of times for two weeks before they return home.

Currently, hauliers from the EU can only make up to two cabotage trips within seven days.

The news comes just days after the government bowed to pressure and announced over 10,000 temporary three-month visas for 5,000 HGV drivers and 5,500 poultry workers to deal with severe labour shortages in those industries.

The measures were agreed after Sir Dave Lewis, the government’s new “supply chain tsar”, held a meeting with farmers and processors.

One official said that collectively the package should mean that no more pigs would be needlessly slaughtered, contrary to recent fears.

Boris Johnson, the prime minister, has been under pressure to allow more foreign workers into Britain to ease labour shortages in various industries, including pig farming.

However, he recently dismissed worries about the prospect of a mass cull, saying the pigs would be killed anyway.

“There is a question about the types of job that are being done, the pay that is being offered, the levels of automation, the levels of investment in those jobs,” he said.

“What we can’t do in all these sectors is go back to the tired old model, and reach for the lever called uncontrolled immigration, and get people in at low wages.”

Keep up to date with the latest developments, post-Brexit, with original weekly insights from our public policy editor Peter Foster and senior FT writers. Sign up here.