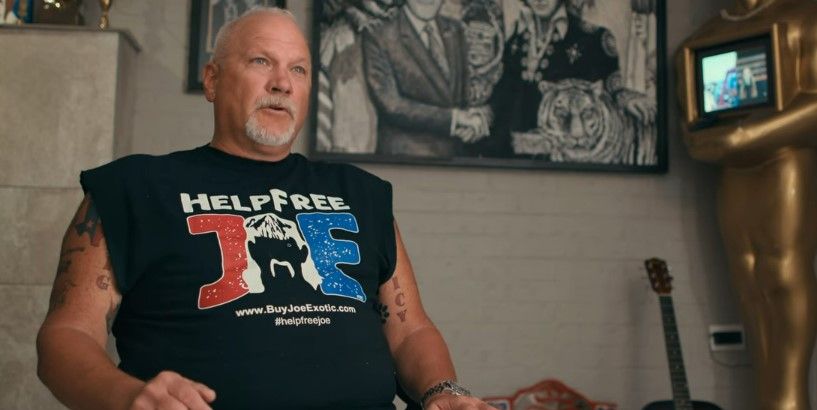 Since Tiger King first premiered on Netflix, millions of people have discovered Joe Exotic and learned of the animal abuse and murder-for-hire charges that got him a 22-year prison sentence, which he’s currently serving. And although a jury has already convicted Exotic, fans have rallied around the former tiger owner and claimed his innocence.

It’s not every day viewers become vocal about a true crime subject’s innocence. The situation is similar to the response to one of Netflix’s major true crime hits, Making a Murderer, where Stephen Avery and nephew Brendan Dassey were seen as wrongfully convicted.

Famously, as Billboard reports, even rapper Cardi B even jumped to Exotic’s defense during Tiger King’s initial buzz, saying she’d start a GoFundMe for the Netflix star (she then walked it back and emphasized it was a joke). Still, for others the documentary was only the beginning of a campaign to free Exotic and prove his innocence.

One of Exotic’s most prominent supporters shows up in the first episode of Netflix’s sequel docuseries Tiger King 2. His name is Eric Love, and for those who haven’t already heard of him, he’s a Texas millionaire who really, really wants to get Joe Exotic free.

Here’s everything we know about Eric Love.

Who is Eric Love?

According to Newsweek, Eric Love is a self-described millionaire, retired police officer, and private investigator from Texas. After the success of Tiger King, Love led a group called Team Tiger, consisting of attorneys, lawyers, and friends of Exotic who wanted the then President Donald Trump to issue Exotic a formal pardon.

After the show aired, according to The Cinemaholic, he sent a letter to Exotic, saying, “I can assemble a team of attorneys, and I think I have a great shot of getting you out of prison on a presidential pardon.” Through late 2020, he worked on a 257-page document to prove Exotic’s innocence. In September 2020, he went to D.C. to deliver the document, and waited for news of the Tiger King star’s release.

In early 2021, Love was so confident he even had a limousine prepared for Exotic’s release and truly believed he could get a presidential pardon. “Joe’s biggest thing is he can’t wait to get out, as you can imagine, and he doesn’t want anyone to see him until his hair is done,” Love told ABC News. “So, the most important person tomorrow is the hair and makeup and wardrobe.”

As seen on the show, Love arrived again in D.C. around the same time as the January 6 mob of Trump supporters. There, he was told he wasn’t welcome. Afterwards, with Trump no longer in office, Love’s campaign for Exotic’s release reached an impasse.

Milan Polk
Milan Polk is an Editorial Assistant for Men’s Health who specializes in entertainment and lifestyle reporting, and has worked for New York Magazine’s Vulture and Chicago Tribune.