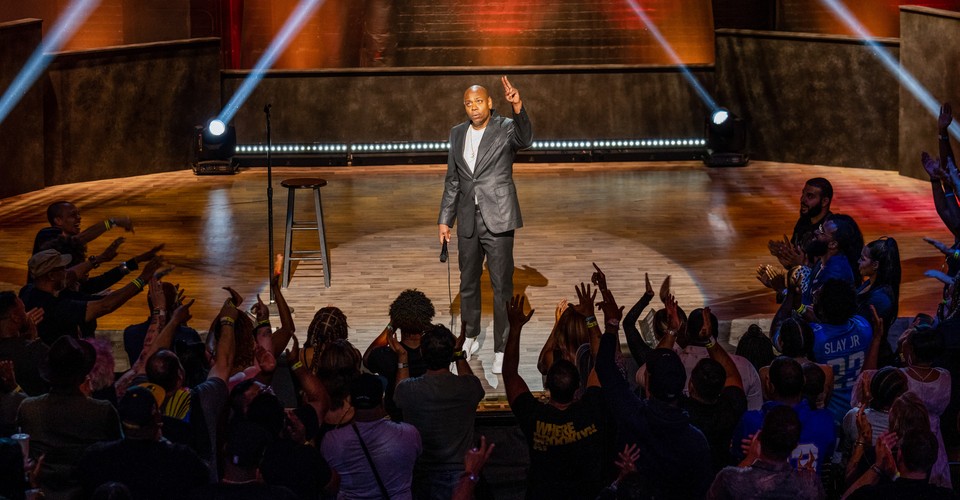 At the midpoint of Dave Chappelle’s The Closer—his sixth comedy special for Netflix—he introduces the story of William Ellison, a formerly enslaved Black man who, after purchasing his own freedom, became one of the wealthiest slave owners in South Carolina. “Not only was he a slave owner; he became a slave breeder,” Chappelle explains, “and employed tactics that were so cruel, even white slave owners were like, ‘Yo, my man.’”

Chappelle tells Ellison’s story to illustrate the lengths to which someone will go to succeed by the standards of their time.

What I’ve long appreciated about Chappelle’s thinking, if not always his comedy, is his capacity to offer grace to almost everyone, and particularly to the people who deserve it least. Ellison’s decision could easily be dismissed as deplorable, but Chappelle chooses instead to recognize his humanity, making the point that any one of us is capable of committing atrocities. In his latest special, though, Chappelle’s grace fails him—not because of whom he offers it to, but because of whom he withholds it from.

Chappelle is deeply invested in the idea that biological sex should define gender. Much of his special is devoted to articulating his frustration with the LGBTQ community for managing to acquire more political privileges than Black Americans while also failing to recognize its complicity in maintaining the power structures that perpetuate anti-Blackness. But he seems unable to understand that the premises of his jokes put Black LGBTQ people in the crossfire.

Over the summer, the rapper DaBaby ignited a backlash with his incendiary remarks at the Rolling Loud Festival in Miami. If “you didn’t show up today with HIV/AIDS or any of them deadly sexually transmitted diseases that’ll make you die in two to three weeks, then put a cellphone light in the air,” DaBaby told the crowd. “Fellas, if you ain’t sucking dick in the parking lot, put a cellphone light in the air.”

In response to his comments, several music festivals removed DaBaby from their bill and fashion brands ended their collaborations with him. This was hardly his first controversy, though; in 2018, he was convicted of carrying a concealed weapon after a man was shot and killed.

“DaBaby shot and killed a nigga in Walmart in North Carolina,” Chappelle says in The Closer. “Nothing bad happened to his career. Do you see where I am going with this? In our country, you can shoot and kill a nigga, but you better not hurt a gay person’s feelings.”

But what about the Americans who are both Black and gay? That’s the population more affected by HIV than any other group in the United States. Chappelle’s joke erases them entirely.

Chappelle wants to use the LGBTQ community as a lens to critique whiteness, but he seems to have forgotten that Black people also exist within that community. His comedy, as a result, asks Black LGBTQ people to choose between their race and their sexual orientation or gender expression.

“I’ve been arguing with the whites my entire career,” Chappelle says later in The Closer. “Just when I thought I had you guys on the ropes, you changed all the rules.” Although his critiques of the LGBTQ community are both homophobic and transphobic, the ultimate target of his discontent has always been white people: “If you listen to what I’m saying, I’m not even talking about them; I’m talking about us, and they don’t listen.”

When Chappelle says that “they don’t listen,” he is claiming that white people whose intersectional identities operate at the margins of power in a patriarchal society can evade his critiques of their whiteness by labeling him homophobic, misogynistic, and transphobic.

But Chappelle also aligns himself with an implicit “us” here. At the simplest level, he means Black people. But considering that the logic informing his jokes rests on the politics of erasure, any Black person who operates outside a heteronormative practice of gender and sexuality must ask themselves which pronoun they understand themselves to belong to. Are they one of them or one of us?

Black people who believe that heteronormativity is the default for our sexual identity might understand the implicit logic of Chappelle’s statement and immediately recognize themselves as part of Chappelle’s “us.”

If you’re a Black trans or gender-nonconforming person who uses they/them pronouns as they pertain to sexual and gender identity, then to Chappelle you are aligning yourself with whiteness. Identifying with Chappelle’s “us,” though, would have to come at the expense of your sexuality and gender expression. This compromise isn’t one that other Black people must consider, because we’re not being asked to concede the fullness of our being.

At the key juncture in The Closer, when Chappelle ridicules white feminists for critiquing a power structure they equally benefited from during the #MeToo movement, he references Sojourner Truth, an antislavery and women’s-rights activist.

“Ain’t I a woman?” Truth famously asked the 1851 Women’s Convention in Akron, Ohio. At the time, the convention’s women exclusively meant white women, but Truth’s impromptu speech was a challenge to the organizers who conceived of their womanhood in ways that excluded others, highlighting the hypocrisy of their exclusionary feminist politics.

Chappelle understands that many white women who struggled to gain equal rights with white men excluded Black and brown women from their fight for liberation. But ironically, while Chappelle uses Truth as a means to illustrate white feminists’ blind spots, The Closer reveals that he has more in common with the white women who failed to recognize Truth’s womanhood than he does with Truth. He excludes Black trans and queer people from his framework of Blackness, neglecting to consider that he’s practicing the same exclusionary politics he satirizes.

Between Chappelle’s departure from show business in 2004 and his return to the public eye in 2014, the United States passed many laws that protect the rights of its LGBTQ citizens. But this year, according to the Human Rights Campaign, more Black trans people have been violently killed than in years prior. The people now asking Chappelle to change are Black LGBTQ people who want him to part not with his paper, but with politics that necessitate their erasure long after the laughter has stopped. They want Chappelle to extend the grace and empathy that would enable us to see that they are our people too.