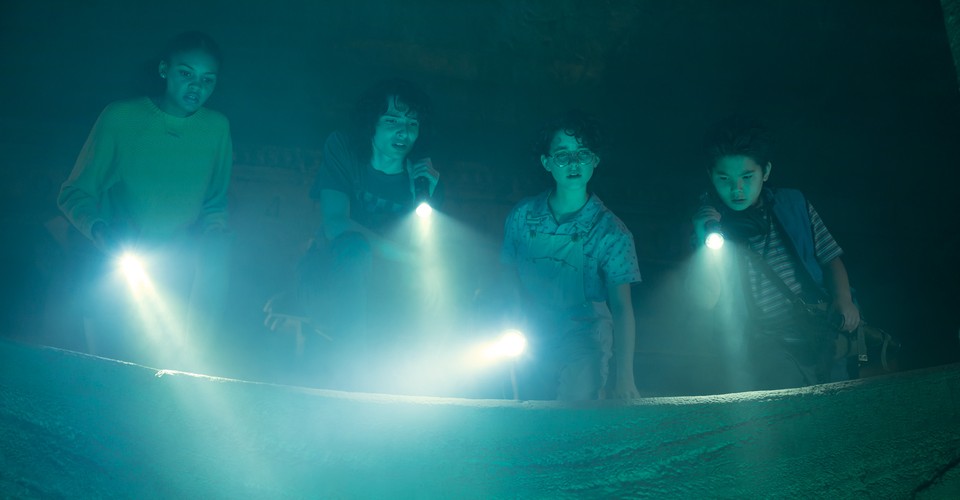 In his memorable 1984 theme song, the singer Ray Parker Jr. said that he wasn’t afraid of ghosts. Now Hollywood doesn’t seem to be, either. In the past few years, the film industry has scrambled to resurrect any property with the remotest bit of brand recognition, be it Space Jam or Trainspotting or Blade Runner; if a movie has ever had a cult following, it’s worthy of a long-delayed sequel. Ghostbusters is, in theory, worthier than most—the original was a colossal success. But it’s already spawned a Part 2, a women-led spin-off, and numerous cartoons, video games, and toy lines. Now there’s Ghostbusters: Afterlife, which makes a concerted, almost ghoulish effort to revive everything audiences loved about the original. The result is not scary, but it is lifeless.

Ghostbusters: Afterlife is directed and co-written by Jason Reitman, a former indie darling who never lived up to the early promise he showed with dramedies such as Juno and Thank You for Smoking. A swerve into franchise material would feel weirder if he wasn’t the son of Ivan Reitman, who directed the first two Ghostbusters movies and produced this one; the family theme permeates the entire film, which follows a single mom named Callie (played by Carrie Coon), who is the estranged daughter of one of the original Ghostbusters, Egon Spengler (the late Harold Ramis). The plot involves a literal excavation of the past: When Callie’s kids discover supernatural activity in small-town Oklahoma, they dust off their grandfather’s proton packs and ramshackle car to fight evil spirits that have been banished to a mine shaft.

As goofy as it all sounds, the story is told with a lot of reverential seriousness. The camera lingers with awe on Spengler’s old inventions, which litter the farmhouse he retired to; when his grandkids take the famous ghost-fighting vehicle out for a joyride, a splash of hydrant water reveals the Ghostbusters’ logo. The film seems intent on replicating the mythic aura of Star Wars: The Force Awakens, which was presented to audiences similarly—as a long-awaited return that would deliver on expectations in ways that other Star Wars sequels had failed to do. J. J. Abrams achieved that by harkening back to the spirit of George Lucas’s first movie, wrapping the same heroic story arcs around new characters and surrounding them with aged versions of the older ones. Reitman does the same, but the hushed, majestic approach simply does not fit the material.

The 1984 Ghostbusters was, after all, an out-and-out laugh riot, even though it was delivered in a sci-fi package. Written by Ramis and Dan Aykroyd, it successfully infused a special-effects-laden blockbuster with the grimy, lovable energy of New York in the 1980s. Somehow, a film in which scientists shoot ghosts with lasers came off as a blue-collar buddy comedy. Reitman’s 1989 follow-up, Ghostbusters II, mostly repeated the formula to massively diminished returns. Paul Feig’s new edition in 2016 was set in an alternate universe with four female stars, a creative decision that triggered an enormous backlash—though the controversy seemed partly rooted in factors beyond the filmmakers’ control.

If Feig’s version angered die-hard fans, Reitman’s is attempting to do the opposite, making every effort to assure them of the original film’s importance. Viewers find out that Spengler at some point moved to the town of Summerville, Oklahoma; was estranged from his daughter and his fellow Ghostbusters; and carried out weird experiments at a decrepit farmhouse until his mysterious end. Callie spends much of the movie mad at her departed dad, but her daughter, Phoebe (Mckenna Grace), is like a carbon copy of Egon—bespectacled, awkward, and science-obsessed. She starts to do her own ghost-busting with the help of her brother, Trevor (Finn Wolfhard), and local kids Lucky (Celeste O’Connor) and Podcast (Logan Kim, and yes, the character is actually named Podcast).

The ghosts of Callie’s day, it turns out, are largely the same as those of her grandfather’s. Remember the Stay-Puft Marshmallow Man, or the snarling demon dogs, or the shape-shifting villain Gozer the Gozerian? They’re all back in some form or another, and though the famed troublemaker Slimer is nowhere to be seen, there’s a blobby blue ghost named Muncher who fills the same energetic role. Paul Rudd rounds out the cast as a helpful summer-school teacher—he and Coon, who embark on a low-key romance in the movie, manage to give sweet, human performances in a film that is otherwise annoyingly hollow.

That’s partly because the shabby comic spirit of the original film is missing, replaced by more drawn-out action scenes and cutesy one-liners from the kids. Ghostbusters: Afterlife is derivative but not unwatchable—until the horrible last act, which brings back original cast members Aykroyd, Bill Murray, and Ernie Hudson, along with some other surprise cameos that seem unnecessary and, in one case, borderline creepy. The original Ghostbusters thrived on irreverence, and to see it treated with such moon-eyed worship feels terribly counterproductive. Not every hit movie from the past needs to be cherished like a holy text, and Hollywood could stand to be a little more cautious about bringing some ghosts back from the dead.